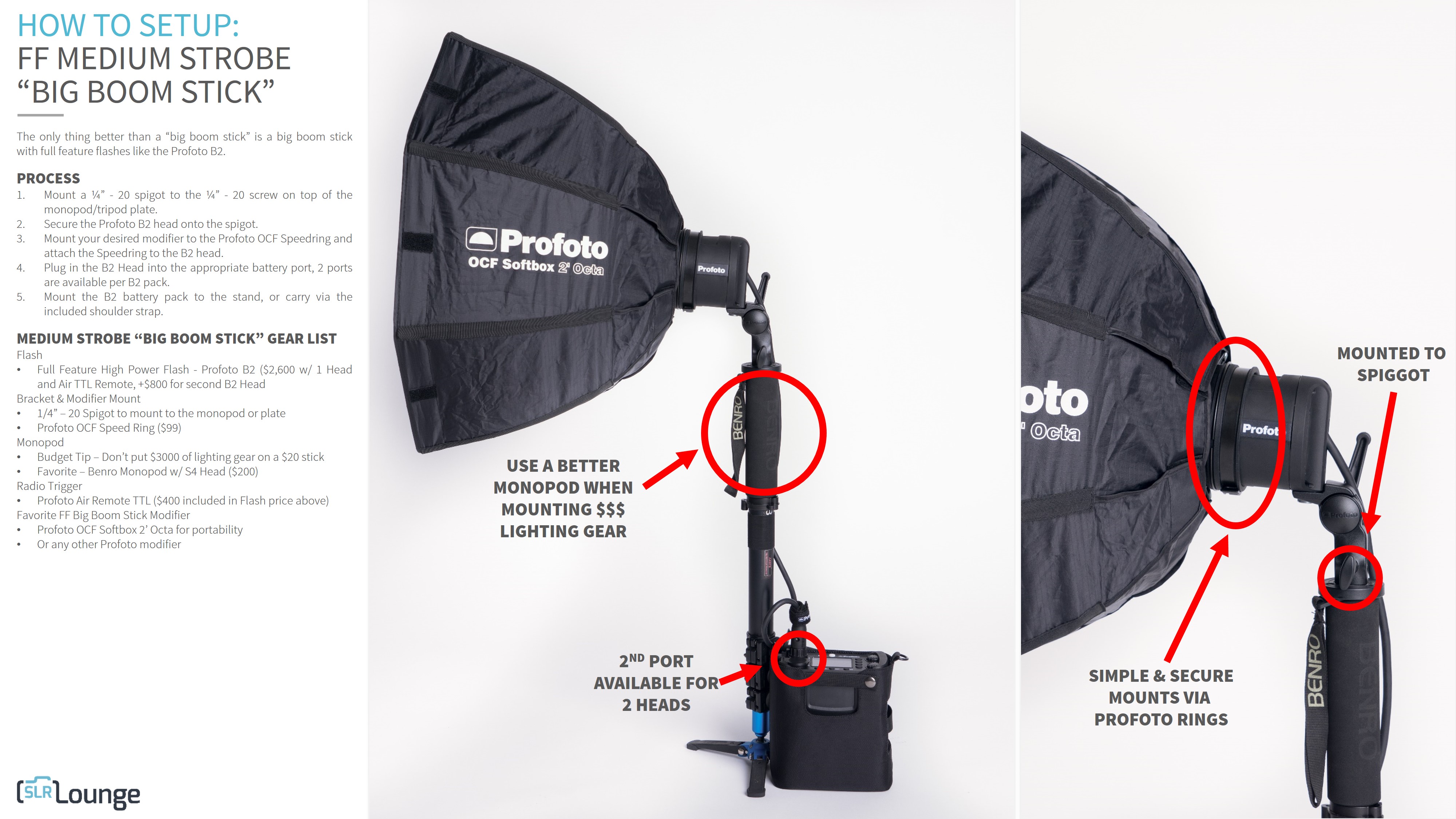 In this video, I’m going to show you now, how to setup a medium strobe but a full feature medium strobe big boom stick. We have our big boom stick right here. This is again … This is Aragorn. This is our lovely Joe Cha has named all of our tripods and monopods affectionately after Lord of the Rings characters so that we know which ones are which.

This is a Benro monopod. We’ve taken the S4 head off of this guy. Again, I have just our brass spigot right here up at the top. Just that it’s a 3/8 inch 20 threat spigot and it mounts it. It adapts to a 1/4 20 female on this side. I know it’s hard to see. What if I hold it all the way out there? Can you see it now? No, now it’s probably all blurry. That’s okay.

What we’re going to do now is we’re going to mount the Profoto B2. This is a new strobe that has come out and it’s fantastic. It’s great because it’s so much smaller than the B1. Some people ask, “Well, why would I get the B2 over the B1? Because they’re roughly around the same price range and the B2 is only half the power.” The B1 is this guy right here. This is the B2 and it’s 250 watt-seconds. The B1 is 500 watt-seconds, this guy is 250 watt-seconds. It’s about 5 pocket strobes versus 10 pocket strobes with B1.

The thing with the B1 is that it’s absolutely massive when it comes to its weight and size. When you grab that … You know what? Logan, would you like to get me the B1 just so I can demonstrate this? We’ll be talking more about the B1 in Lighting 301 as well as 401. Because it really qualifies more as a studio strobe and that’s what 401 is going to be particularly for as studio size strobes.

Look at this. Thank you sir. This guy is big. Compare the head sizes to this. This is the head size on the B2, this is the B1. You might be saying, “Well, the B1 has the battery pack built into” and you’re absolutely right. The B1 does have the battery pack built into it. The problem is that with the B1, when you mount this, particularly when you start mounting this onto booms and on the stands where they aren’t boomed out, you’re putting a lot of weight on the head. You’re putting a ton of weight just on this top piece. When you start getting larger modifiers on there, they get a little more cumbersome, it’s not as portable.

This doesn’t fit nearly as well when you’re traveling into something small as this guy would. I can get this pretty much into any piece of luggage I want. What you’re getting is essentially portability with a B2, whereas with the B1 you’re getting that convenience of everything in the same package. As a hand held boom stick with a modifier on this, you’re going to need someone that has a bit of muscle to do it because it gets pretty heavy. That’s the main difference here. Yes, pricewise they’re pretty similar, but with the B2 you can also get a second head for it as well. Let me give you back that guy. You’re going to pop him in there for display purposes. Fantastic. That’s a weird place to put, but whatever. I’m not going to fight you on it, do whatever you like buddy.

That’s the main thing. This guy is 250 watt-seconds, but look at how easy this is going to be. Regardless of whether you’re using the B2 or the B1, they’re both full feature strobes. This guy is going to cost you at around 2,200 bucks. It comes with a battery pack as well as the head. Each additional head you can get 2 heads for a single battery pack. An additional head is another 800 bucks. This head just mounts directly to our spigot. I’m just going to tighten everything. You can put whatever modifier you want right over the front of that. It fits all these new OCF modifiers. They’re basically super portable off camera flash modifiers. They’re smaller versions of their larger modifiers which are fantastic.

Then we have our pack right here. Now let me try and balance this guy. Balance, yes sir. Yes sir, indeed. You will stay balanced. I command you. This is the Profoto AirTTL remote. Again, this is a full feature remote that allows you to control all the functionality. Your radio is built into your battery pack. I’m going to take the shoe off. This shoe was meant for showing not for walking. These shoes weren’t meant for walking. We’re going to pop this right under our hot shoe. Turn this guy on. We’re going to turn this guy on. The wonderful thing about these B2’s is that they’re incredibly simple to use.

You have very, very reliable full power to full power recycle times. You have amazing consistency when it comes to color temperatures and so forth. It’s just professionally built across the board, design wise, menu-wise, it’s super simple to use. We can just pop this on. I have channel A right there, channel A right here. I’m going to go ahead and do a test and there we go. Let’s go ahead and turn on my camera so I actually have it turned on. All right. This is all set up and we’re firing.

What’s the big deal between these 2, between a full feature versus a manual strobe? Well, on this guy I have high speed sync, I have first curtain sync, I have second curtain sync, I have TTL, I have manual. I have every single one of these functions that I possibly could want. I have a lot more flexibility. I can do very cool artistic things with rear curtain sync and this strobe setup that I wouldn’t be able to do, at least not easily with a manual strobe setup. Granted, we’re going to show you how to do rear curtain sync manually by triggering it yourself, but of course it’s not as accurate nor is it as flexible in different situations.

With this battery pack you can of course use a strap for it and have it hand-held or you can figure out a way to mount it to your boom stick, whatever you want to do. This is the prototype that we received for it, so we’re actually going to be sending this back to Profoto and we’re getting our new one soon. I haven’t done ghetto rigging of this device to my monopod yet. Be sure to know that I will do that when I get my actual unit. We’ve taken it out on several shoots and it’s a fantastic device. Same with the B1, they’re both great, different purposes on each one of them. This is that ultra-portable version of their medium strobe essentially.

Let me show you something. Let’s put this guy over here. Logan, do you want to get me the other big boom stick. Granted, keep in mind that this big boom stick does have 2 flashes on it. This is basically right now double the power as the Profoto. Do you remember how long and convoluted this process was of getting this guy set up? We had to have a special bracket for it. We played around with tons of brackets to figure out what fit. Once we got around that, we have 2 power cables, we have the battery pack all mounted. We have the pod [inaudible 00:06:39] that we had to get splitter cables for that go into each side. We had to get everything mounted up here.

Again, when you start comparing weight of this, this is far more like the B1 weight. Actually this is probably more heavy than the B1 weight. This is literary the same weight as a pocket strobe right now granted, I don’t have the battery that I’m carrying with it. Even with the battery it’s still far lighter than this setup over here on the left side. What is that money getting us? On this side with all this combined we’re looking around 1,200, 1,300, 1,400 with the radio trigger and everything and we’re getting about 500 watt-seconds worth of power. We don’t have manual control, we also have a more cumbersome setup overall. I think it’s 1,200, 1,300 bucks somewhere around there.

With a B1 we’re getting the same amount of power, a much more simple setup. We’re getting the AirTTL system with full feature control for around $2,000 or a little bit more. With B2 we’re getting a more portable version of the B1, half the power but again around that same price point. You can see that once you start comparing apples to apples, you’re not necessarily saving tons of money. Sometimes it’s just worth the investment going with a nicer gear because it helps you out. It saves you so much time and time is money. It’s convenience too of having a better system, a more functional full feature system where I can control all my power settings directly from the camera and not have to be ordering lighting assistance around doing all these different things and so forth.

That’s one of those things where I would always present to you guys. If you’re looking to just jump into stuff and to start practicing then do so and invest in something that fits your budget right now. When you start getting and shooting more professionally, that’s when you really want to look to invest in better gear because it’s going to make your life that much easier. On the budget side you can rely on the Bolts, they are fantastic units. Whether you get the Bolt, the Godox, the Cheetah versions of these guys they’re the same thing. They’re really great units and they’re at a great budget point and they’ll get you into basically medium strobe power for a fairly affordable price.

When you have the budget look to Profoto. They are our professional strobe brand of choice. They’re absolutely fantastic to use. Great customer service, great support and just amazing products overall.  That’s it for this video. Hopefully you all enjoyed our setup of our medium-full feature strobe on our big boom stick. That’s actually it for this entire chapter on gear. Give yourselves a pat on the back. I would totally give myself a pat on the back if I could, except this thing is just going to fall over.

8 Steps to Perfecting Each Scene & Image When Using OCF