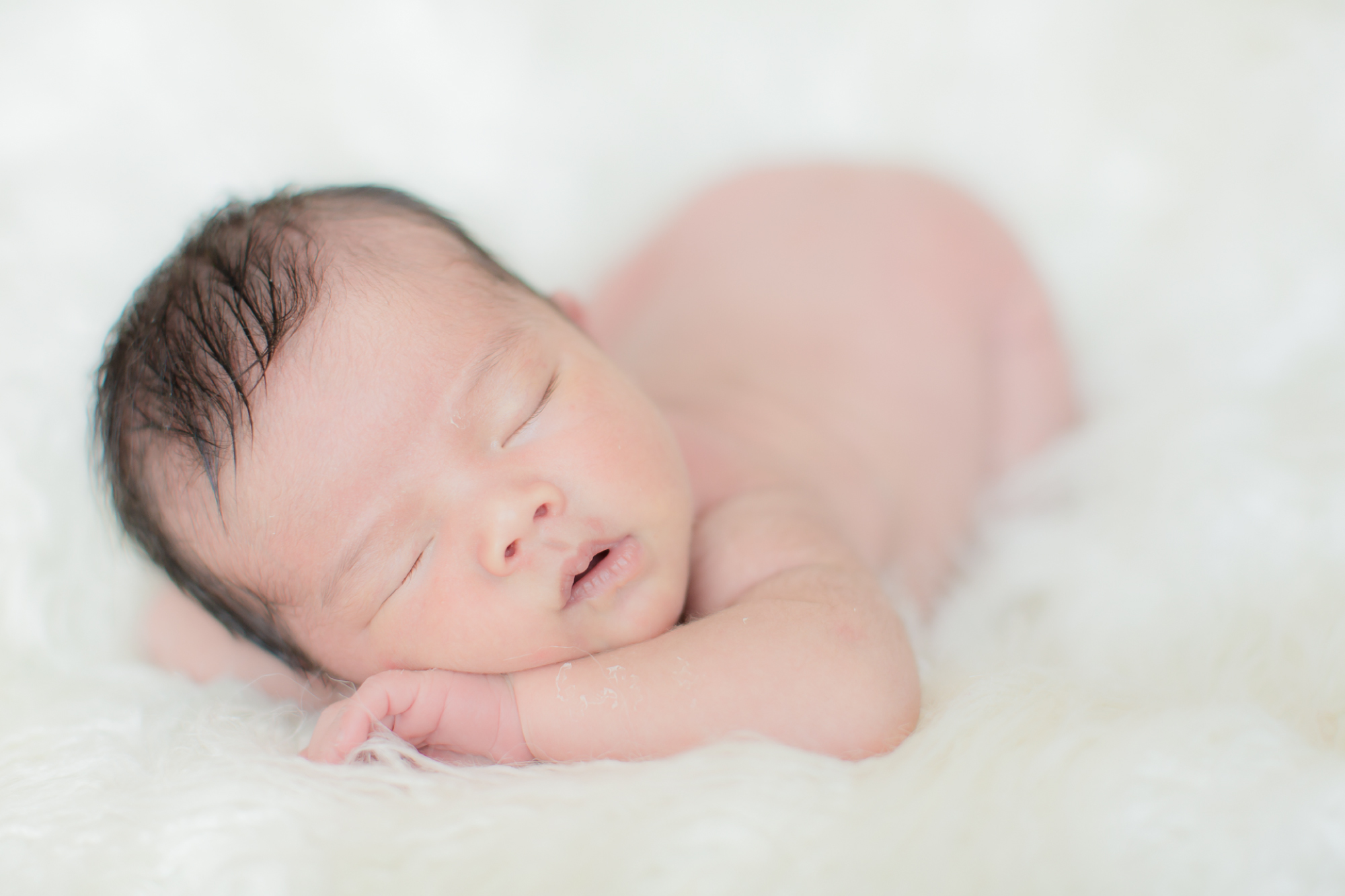 We already have Ellie in our tummy pose and we really don’t need to do too much here other than just make a few small adjustments to the pose. So to start, I’m going to, again, very gently turn Ellie’s head to the other side. I’m doing this because I want Ellie to be facing the main light and to be having her body kind of extend out and to the right of the frame. Now this way, if Ellie opens her eyes in the middle of the shoot, I have a perfect shot of her eyes, which will be nice and bright and will have beautiful catch lights because she’s facing that main light directly. Again, we don’t know if that’s going to happen, but we want to be prepared to get the best possible shot in case it does.

So once I have her head turned, I’m just going to gently bring her chin forward a bit and rest it on her arm. Again, as she’s moving a bit and getting restless, I’m just pausing a little, being patient, and calming her back to sleep. One thing that is worth mentioning is that when you’re shooting on say a fur blanket with a baby’s face close to that blanket is to make sure that you check your details closely. Be sure to check the fur. Make sure it looks nice. Make sure you don’t have any fur strands that are stuck to the baby’s face, or covering any important facial features, or anything like that.

With Olivia again filling light with the silver reflector straight, top-down onto Ellie, we are ready to get our first set of shots, which you see here. We’re shooting again on our 50mm 1.2 lens. We’re at 1/100th of a second shutter speed, F2, and 200 ISO. As Ellie makes a few different reactions and expressions, I’m there to capture them as well, which you see here.

Now personally as a father and as a guy, I love that second image in this set. It has that kind of that ‘I am grumpy’ look to the expression, which I thought was priceless, and we didn’t get one with her eyes open, but again that’s okay. We were prepared in case she would have opened her eyes to get some great shots.

Now while I have her in this pose, I’m going to get some props and get a couple variations. So I’m going to grab the pink flower and place it around her head with the same camera settings and lighting. I’m able to grab another quick look for this pose and scene with the bow, and that’s what we have here. Again, I adjusted my aperture to F2.8 for the second shot, just to make sure that her backside doesn’t fall too far out of focus. So to compensate, I’m bringing up my ISO to 400.

Now you’ll notice that in these two shots that Ellie’s face is just a bit squished against her arms, and a lot of newborn photographers are going to try and take every single shot showing the full face and trying to make them absolutely perfect with every shot. This is something that I would frown on, which is trying to make every shot flawless, and I think parents would agree with me when I kind of say “hooey” to that whole notion. Now, of course, I want to get a lot of beautifully, perfectly posed, non-squished expressions, but when I see stuff like this, I think it is absolutely priceless. That light squishing of the cheeks, to me it’s kind of adorable. It’s something that parents will want to remember.

Now at the same time, with each pose, I do want to also get some shots where we can really perfect the pose, and at this time Ellie turned her head into a position that she thought was probably more comfortable. I felt like it looked great, so look, I’m not going to turn her head back just for myself. If she likes it and it looks good, let’s keep it.

With this go around, I wanted to get that perfect, not squished shot, so I’m going to help her out by adjusting her head a bit, just to try to prop it up a bit and make sure that her cheeks aren’t laying on her arm. Now, I’m simply going to adjust my position and shoot from the left side this time, again with the same camera settings we get the following image.

Last, I’m going to take a moment and put on her little, knitted beanie and her diaper cover and we’re going to get a couple more basic shots. For these shots, I’m simply going to adjust both her hands so they fit nice and snug kind of under her chin, and then adjust her face a little so that she’s looking forward, towards the main light.

Using our 100mm macro and camera settings of 1/100 of a second for our shutter, F2.8 for our aperture and 800 for our ISO, we get the following image. Here, I quickly switch to my 50mm 1.2 lens and with the same pose and lighting, I’m just going to shoot a slightly top-down shot to capture her whole body in the shot, as shown here.