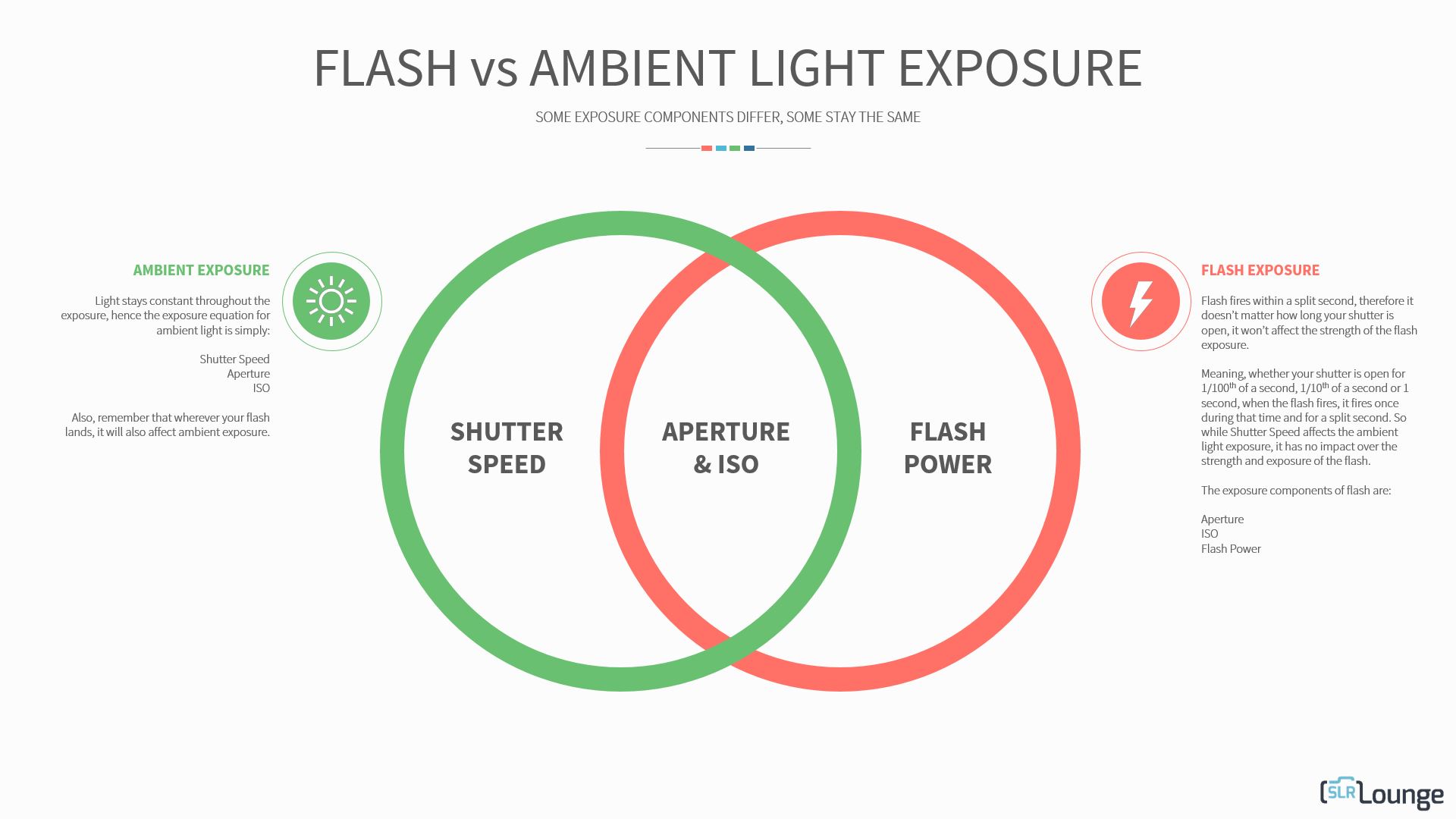 All right, so let’s dive a bit deeper into this flash versus ambient light or constant light exposure, because some things are going to change, some things will stay the same. Now, over here on the constant or ambient light exposure, it’s just the traditional exposure triangle, okay? Now, constant light, we define that as a light that’s going to stay the same throughout the duration of the shutter speed. Your exposure is going to be equal to just whatever the exposure triangle is: your shutter speed, your aperture, and your ISO.

But, over here on the flash side, well, let’s assume that this flash, what we’re going to talk about right now is the speed in which this flash fires. It’s actually known as the flash duration, and while it’s not quite instantaneous, we’re going to talk about this in more detail later on, so let’s assume for right now it’s basically instantaneous, okay? This happens, this flash fires, and it’s one ten-thousandth of a second, that’s how fast it is. Well, if this is firing at one ten-thousandth of a second, it doesn’t matter what your shutter speed is set to.

What stays the same? Well, your aperture and your ISO, they stay the same regardless of whether you’re using, or say exposing for a constant or ambient light, or whether you’re exposing for flash. For example, aperture, if I close down my aperture, it’s going to cut down the amount of ambient light that’s able to come in, it shrinks it down. Well, it also cuts down the amount of flash that’s able to come in just the same as ambient light.

Same thing with ISO, we’re digitally manipulating the sensor to make it more sensitive to light, right? That sensitivity is going to have the same effect over ambient or constant light as it would over a strobe. Those two things are going to stay the same, but, on this side, we have flash power, which means that essentially, we’re simply controlling the exposure of the flash by adjusting up and down the actual power, the output of the flash. It’s going to be measured, we’ll talk about the measurement, we’ll talk about all that stuff more.

On this side, we have flash power, which only applies to flash. On this side, we have shutter speed, which only applies to constant or ambient light. Those two things in between, your aperture and your ISO, is what stays the same across the board. Now, what this whole thing does is it presents some challenges, and also a lot of creative potential for balancing between flash versus ambient light.