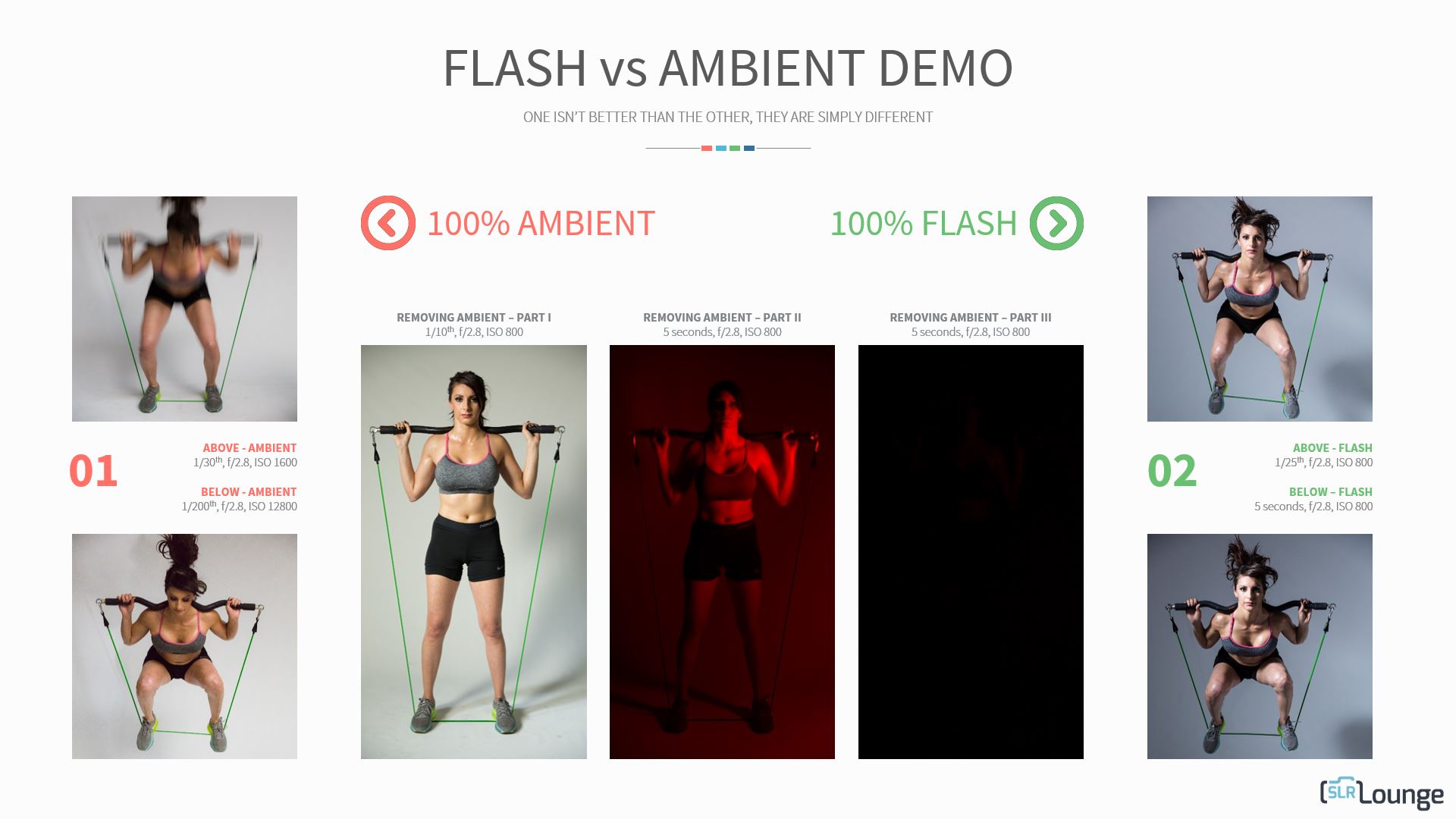 What we have here is on the left side, we started with just ambient light, and the ambient light that we’re using is just the light that’s coming off of our video lights for the recording purposes. For the exposure setting, we’re using only ambient light, we’re at 130 of a second, F2.8 and ISO 1600. At 130 of a second, if you remember from photography 101, you know that’s not going to freeze your subject and you can see that here. We have tons and tons of motion that we capture. She’s completely blurry in that shot. Below that, what I’ve done here is we sped up the shutter speed to 1\200 of a second. This is starting to get to the speed where it’s quick enough to begin freezing at least a bit, it’s not completely frozen, we probably need to get to 1/500th or 1/1000 of a second to completely freeze her.

At least, we have quite a bit more detail, so we can see the jump, we can see detail on her face. There’s going to be a little blur in movement. The problem though is that we’re at F2.8, which is pretty shallow of a deeper field and it’s pretty wide open of an aperture. We’re at ISO 12800, that means that the image quality here is absolutely horrendous. This image has so much noise, it has so many issues going on with it but, it’s completely unusable. If we’re just left with ambient light on the left side, this is kind of our only option in the situation. We can go down to a 1.2 lens and get our ISO up a little bit or bring it down just a little bit. Still, we’re kind of left with that.

Let’s now go over to the flash shot. This is at 1/25th of a second at F2.8 and we’ve brought our ISO down one stop, we’re at ISO 800, here we’re at 1600. We’re flashing at probably around 1/8th to 1/16th power coming out of the unit. Interesting, she’s completely frozen there, but why is that? Again, we talked about the flash, the flash duration, the speed in which this flash is firing, we said for the purpose of our example, let’s assume it’s 1/10000 of a second, that means we get our full exposure within 1/10000 of a second. If we’re shooting someone that’s in action, our flash is actually freezing them, because if we’re exposing full flash, then what happens here is that the flash goes in 1/10000 a second, it’s fired and it’s done, and that is what freezes the subject regardless of how long the shutter is open.

If you look right below this, this shot right here was at five seconds. This shot is at five seconds, F2.8, ISO 800 again, same flash settings, exact same power 1/8 to 1/16 power depending again if you’re doing direct flash or if you’re bouncing it here, we’re bouncing off of a V-flat. She’s completely frozen, why? Because the flash duration is so fast, the light is entering and stopping so quickly that that’s what freezing her in place. What do we have to do to get this to five seconds? We actually had to cut away all the ambient light. This is where we started, at 1/10th of a second at F2.8, at ISO 800, this is basically where our video light was exposing. We turned off the video light, we were able to get it down to five seconds at F2.8, ISO 800, and you notice that it’s almost pitch black.

The light that we’re actually picking up was off of a little heater. It’s the red light coming off of a tiny bit of heater. It’s enough light that at five seconds shutter at ISO 800, we get a little bit of ambient light there. If we’re to shoot it with that ambient light, we would have a little bit of red streaking from the ambient light that would be exposed during that shutter speed. We cut that light away, we removed that light, we just unplugged it and then at five seconds at F2.8 and ISO 800, we have no ambient light. Here, there is no ambient light whatsoever, when that flash fires, this was the only light present in the scene and because it fired at 1/10000 of a second or so, Olivia is 100% frozen, it’s a tech sharp image and we had the shutter open for five entire seconds.

What I’m hoping is that you guys understand that your shutter speed is only going to dictate the amount of ambient light, the amount of constant light that’s coming in a lens, not the amount of flash light. If all you have, if you have no ambient light whatsoever, this is the only light that’s going to be present and if this is the only light that’s present, essentially the speed or the shutter speed, the rate that you’re capturing motion is going to be equivalent to the flash duration, which we said was for example, 1/10000 of a second. We’ll discuss flash duration in more detail because it’s not actually always 1/10000 of a second, it actually varies.