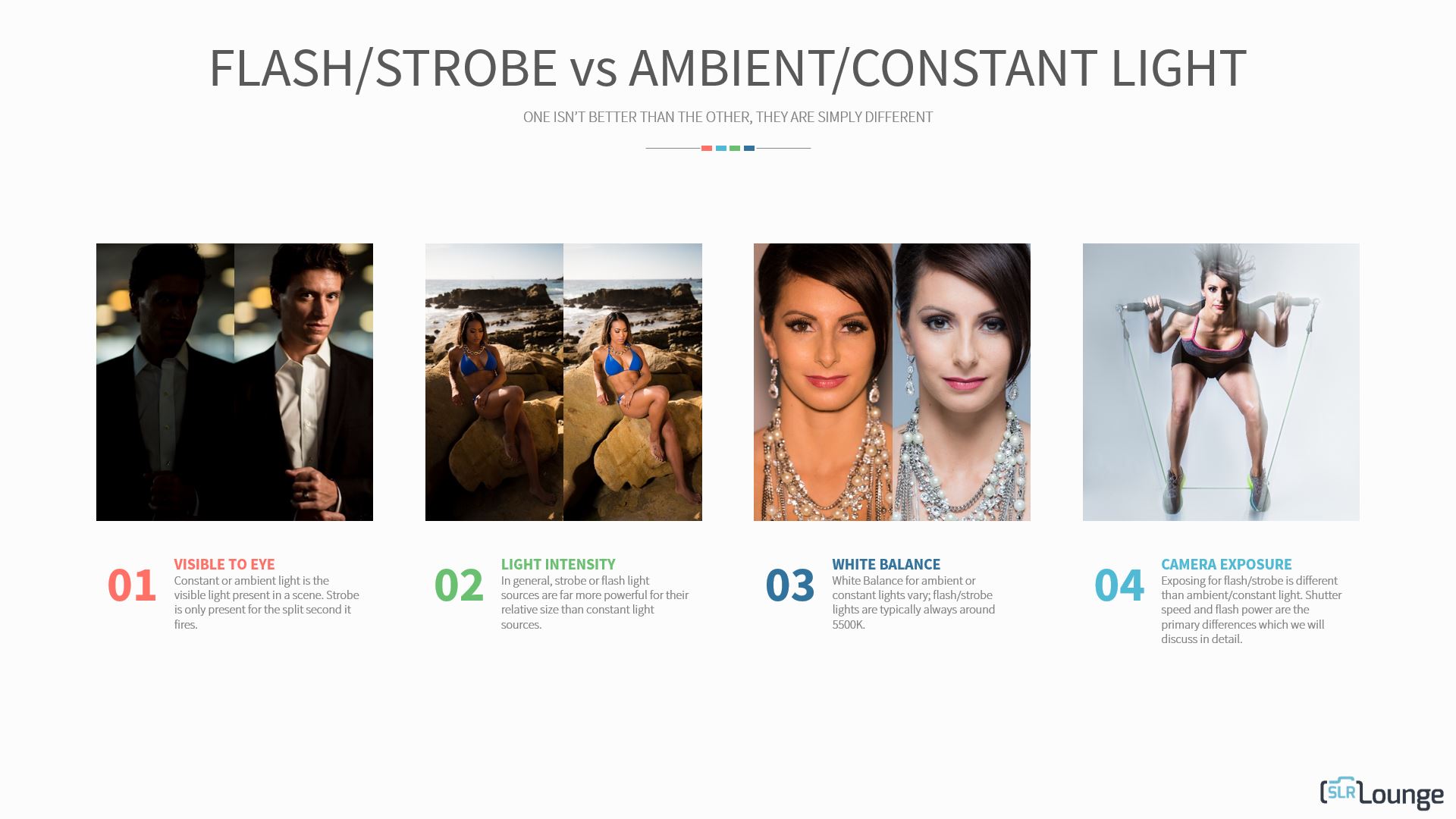 Okay, lets jump in to flash or strobe vs ambient or constant light. This is the primary foundation because you need to understand the differences between these two types of light sources. Now, lets start simply from number one, visibility to the eye. A flash or a strobe is only visible for the split second that it’s turned on, for the split second that it fires. That is the primary difference between a strobe versus constant light.

One we can see, it’s visible to the eye, the other one isn’t. A strobe is not unless it’s firing and you can see it when it’s firing but not other times. What about this? What about these terms? Flash or a strobe, what is that? Well, all that defines is simply basically the power of the flash but all these are the same thing. Let me show you for example, generally with this guy, the LP180 small flashes like this, we call it flashes or we call it pocket strobes.

Now, larger flashes like this this guy, this is an Einstein 641 second. This is a studio flash which we refer to as studio strobe or a full strobe or a strobe or whatever you want to call it but typically theses are called strobes, typically these are called flashes. The lights operate the exact same. The only difference between these two lights is just that this puts out more power. At least that the primary difference. This will will put out maybe six, seven, eight times the amount of power that this little guy will but of course this isn’t that convenient it has to be plugged into the wall or you have to have a self contained battery that you take along with you, it’s larger, it heavier and so forth. While you get more power you also require a lot more.

The difference being is that this is a little more convenient, it’s more portable. It still has it’s own separate battery pack which makes it less convenient than a pocket strobe but it makes it more convenient and more portable than a studio strobe. There’s tons of different flashes on the market each with different various functions and so forth but primarily they all operate the exact same way. They put out light for an instant of a second and then they remain off, these are strobes.

Let’s talk about point number two which is the light intensity. This is another major difference between strobe versus constant lights. For the size of the actual light in comparison to the light output you get far, far, far more light intensity, more power out of this guy than you would out of this guy. This is a light panel chroma, I can turn this guy on right here and it’s fantastic, it’s wonderful for lighting indoor sets for lighting in scenes that are a little bit darker. It’s great for that, has varying power levels an so forth but if I took this outdoors in midday sun, you would not even be able to see this, I mean if you brought it like maybe one inch away from the subject, yeah it might work as a fill light, if it was super close it would be a fill light but a simple pocket strobe like this LumoPro LP180, this can actually overpower the sun.

Now, it can only overpower the sun for a split second. For that fraction of a second that it’s firing, which means that we can do all sorts of creative things things. In this shot right here you see us brightening up our model. We are not even using it directly, we’re actually bouncing it. If we used it directly we can even bright her more but we’re brightening the model so that she has the same kind of exposure to the same brightness as midday sun.

All right, let’s move on to point number three which is the white balance. The white balance for ambient or constant lights, it varies. For this light for example the light panel chroma, the ones that we have on set that we’re using to light the set, they have varying light temperatures. What you see right now this is daylight white bounce so it probably looks really blue to you guys but I can actually warm this up. I can warm it up by adding in a little bit of tungsten to it. We can get anywhere in between where we have had this tungsten daylight mixture which is probably around 4200 degrees Kelvin and we can also warm it up down to like around 32, 3600 degrees kelvin using only the tungsten light.

These types of light, LED light panels generally they vary in temperature which is fantastic because you can use them to match the temperature of whatever scene that you’re shooting within. Other types of constant lights, they might not vary. They might just be set at a certain, basically temperature. We’re going to talk about this in more detail later on but for example these lights in the background these tungsten lights, they come basically at that temperature, we cant change it. That’s probably around say 2100 degrees Kelvin so it’s a very yellow, very warm light.

Other lights like the sodium kind of fluorescent lights they’re going to be green and so forth but flashes, these are a little bit different. Regardless of what kind of flash you buy. Whether it’s a pocket strobe, whether it’s studio strobe, whether it’s somewhere in between, every flash is going to come defaulted at around 5500 degrees Kelvin. We would modify this light color by adding what we would call a gel to it and again we’re going to talk about that a little later on.

Otherwise they’re basically going to always fire at 5500 degrees Kelvin which is right around that midday sun color temperature. One small interesting note, depending on the quality of the flash it’s going to give you a certain consistency in the light color, the light color and the output actually. For example a nice flash might always give you a flash that’s in between 4550 degrees Kelvin and 45 … Did I say 4550 … 4450, between 4550 Kelvin. Meaning it’s a hundred degree variance between flashes or it might be even more precise.

A less expensive flash might have 400 to 800 degree variance between fires. When you shoot it’s going to be a little bit different in color. Now, for most people you’re not going to notice a huge difference but if you’re a professional photographer and you’re relying on power and color consistency, that one thing to note is that a higher quality flash will give you better consistency as far as output, power output and also the color temperature between shots. Okay, so just one quick note there.

Last thing I want to mention is the camera exposure. The fourth difference between strobe versus constant light is that the camera exposure is going to vary just a little bit. Somethings stay the same but somethings will actually vary and the reason why is because like we talked about, strobes only put out light for a thousandth of a second, a fraction of a second. Which means that if my shutter speed is set to one two hundredth of second, if it’s set to one tenth of a second, if it’s set to ten seconds it doesn’t matter because the amount of light coming out of the strobe is always going to be the same in that period the shutter is open.

That creates differences in the way that flash is exposed versus constant light because as we know with constant light, however long the shutter is open, well that determines how much light is going to come in. We’re going to discuss that in more detail as we go through … I really want to hammer this point home.