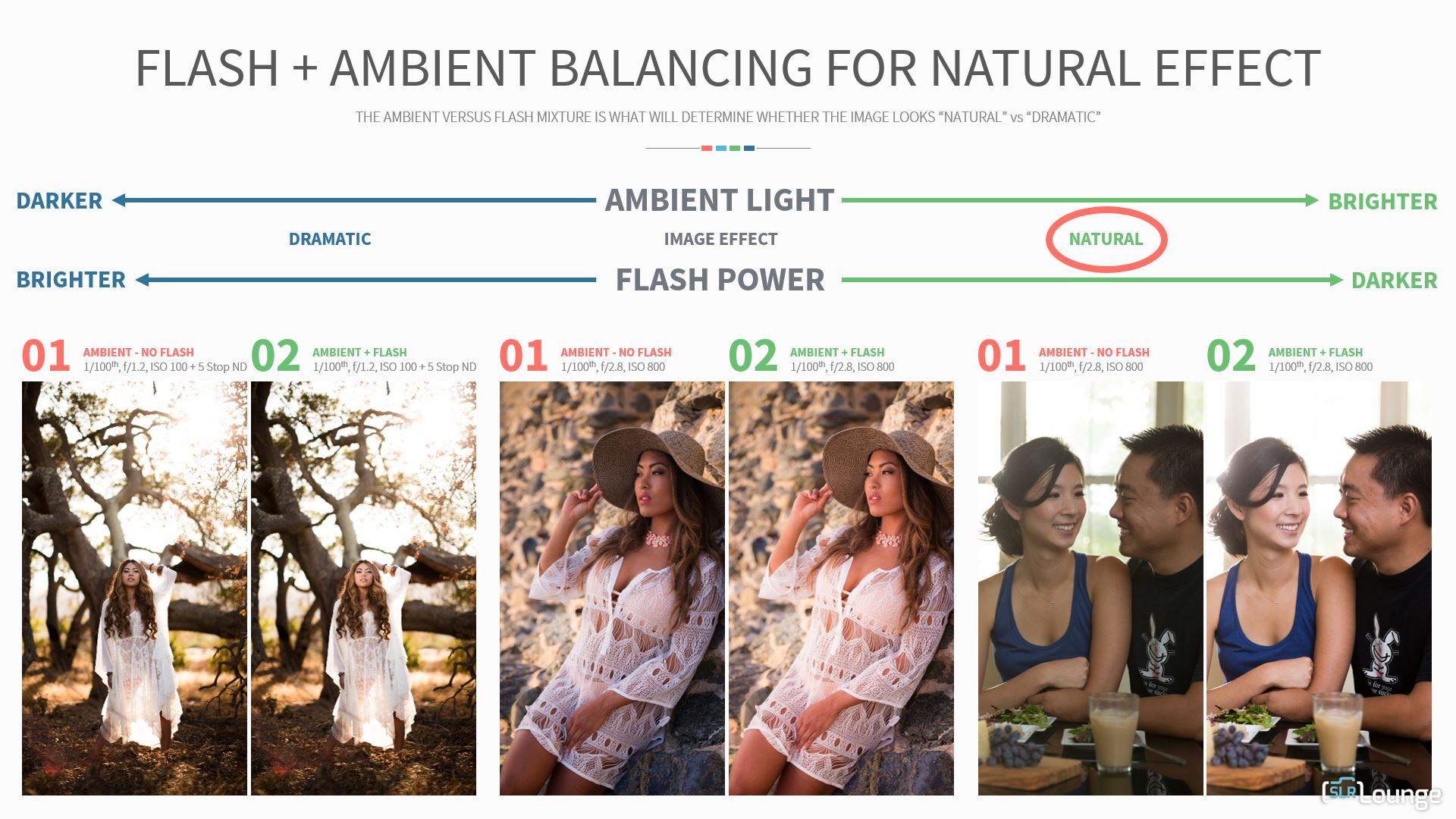 Now, really this entire chapter is about understanding the balance and exposure between ambient versus flash and how they combined together to create whatever look that you want to go for. In this particular slide in this particular video, I want to discuss basically flash and ambient balancing for a more natural look with your flash images.

We’ve talked about before how some people think that you can’t take get natural images out of flash. What it comes down to is simply the type of light modifiers that you’re using and more importantly, the balance between ambient light and flash.

We have a nice little diagram up here. If you want an image to look more natural, then what you need to do is you need to take the ambient light exposure and you want to expose towards the brighter side. Then for flash power, you’re going to dial that actually down to be a little bit darker. Basically, what ends up happening is that your flash is being used more subtly in these situations. It’s used to just slightly modify direction of light, slightly modify quality of light, and those type of things. It’s not used as really just this overpowering type thing.

We’re going with a darker flash power, we’re going with brighter ambient light. That’s what we see in all these images here. We have a nice, very natural kiss of light that gives us a beautiful, natural image overall. It looks similar to if we use a reflector except, we have more power control. We have more light control with flash.

Let’s talk through each one of this images briefly. Again, we’re going to go through all these images in detail, talk to the sets and the scenes as we get to them. Right here, and what I want you guys to get in the habit of doing is when you approach a scene, you always, always, always start first with just your ambient light exposure. You’re going to dial in your exposure setting for what you want the background, for what you want that scene to look like. At that point, that’s when you decide, well, do I need a little bit of flash? If so, what kind of flash am I going to use? Where am I going to put it? What I want to modify with and so forth.

Over here, number one. This is ambient light, no flash. This is our first shot that we took and I said, “I love this exposure.” I’m going for this really nice bright and areal look with this image. We have Yoko here standing in between this tree trunk. It has this great blown out look. We have a beautiful flare coming in from the sun. I don’t want to go any brighter than that because any brighter that was great for skin tones and everything, but then I lose saturation, I lose color in that kind of background bouquet stake.

What I want to do is just get to that point and add a little bit of light. Here, we’re at 1/100 of a second, we’re at f/1.2 at ISO 100. We have a five stop neutral density filter. I’m going to show you guys a little bit  more of this in detail in a bit. This is a neutral density filter. What it does is it simply cuts down the amount of light that goes in the in the lens.

Why do we need something like this? Well because flashes, which we’re going to again discuss in more detail is they have an issue with synchronization speed. Basically, the speed of what your shutter is firing. Generally, the cut off is 1 to a 100 second. There’s ways around us that will cover.

If you want to get the most power out of the flash, the thing is you got to go below that shutter speed. If we’re shooting it at f/1.2 at ISO 100, in the middle of the day, we can’t get the shutter speed slow enough to basically allow the flash to fire. That means that the shutters speed’s to be like 1/8000 of a second because it’s so bright outside. We use a neutral density filter to cut down the lights so we can bring the shutter speed down. Again, we’ll talk about this more later on.

With our flash, I have a flash bouncing off. I think there is a silver in this scenes. We’ll talk about it more, but it’s bouncing off the left and coming back. It’s giving her face a nice a kiss of light. The exact same image, you can see how big of a difference it makes. Having that little kiss of light and how it still has a beautiful, natural effect to the image.

Right here, this is during sunset. I had to do two things. I had to clean up the color of the light because well, the sun was setting at that point so if I use basic flash, it’d be too blue. I put a gel on and I bounced into a reflector. Here, we have 1/100 of a second at f/2.8 and ISO 800. It’s pretty dark outside. OK? It’s getting pretty dark.

I add just a little kiss of light. Just to add a little bit of fill. Again, it bounce off the left side over I think it’s a white over silver reflector. Again, we’ll talk about them more later. You can see that nice color of light on her. Kind of matches the color of the background light. It looks beautiful, has a soft fill, very natural looking effect.

Right here, again, we’re letting the background blowout. We’re leaving that window as blown. I don’t want to change that. I want it to look natural. I want it to leave it bright. All I want to do is add add a little bit of flash to give me some of flash direction and to clean up some of that existing light in the scene.

We get this beautiful look. This was a lifestyle section that we did at their house, which is really fun. They kind of pretended it was just a Saturday morning. We just shut them as they made breakfast, and talk, and have fun. It was really cool scene. All I want to do is just add a little bit of light to just clean up some of the existing light in the scene.

What is the key here with all these shots? Well, the mixture of ambient to flash is more ambient and less flash. We’re going very subtle on the flash power added and we’re just adding whatever we need just to give that ambient light a little kiss. One thing to remember, we talk about basically dialing in everything and how on the flash power side, what matters is flash power, aperture, and ISO. What matters on the ambient side is shutter speed, aperture, and ISO.

One thing to remember is that whatever the flashes pointed at is going to affect the overall image exposure. Meaning like for example, in this shot, we exposed for this background. A 1/100 of a second, f/1.2, and ISO 100. If the flash happens to be firing against the background tree, it will affect that exposure not areal. You’re adding flash to that area. Just keep in mind that, yes, the overall exposure in certain areas can be affected if flash spills into those areas.

What we need to do is basically modify and control the lights so the flash goes exactly where we want and need to in these scenes. That’s what you can see here is in every one of the scenes that we’re shooting, we’re refining and controlling the light so the flash is going exactly where we put it. That way, we don’t get any kind of nasty background spill or anything that wouldn’t look natural in these shots.