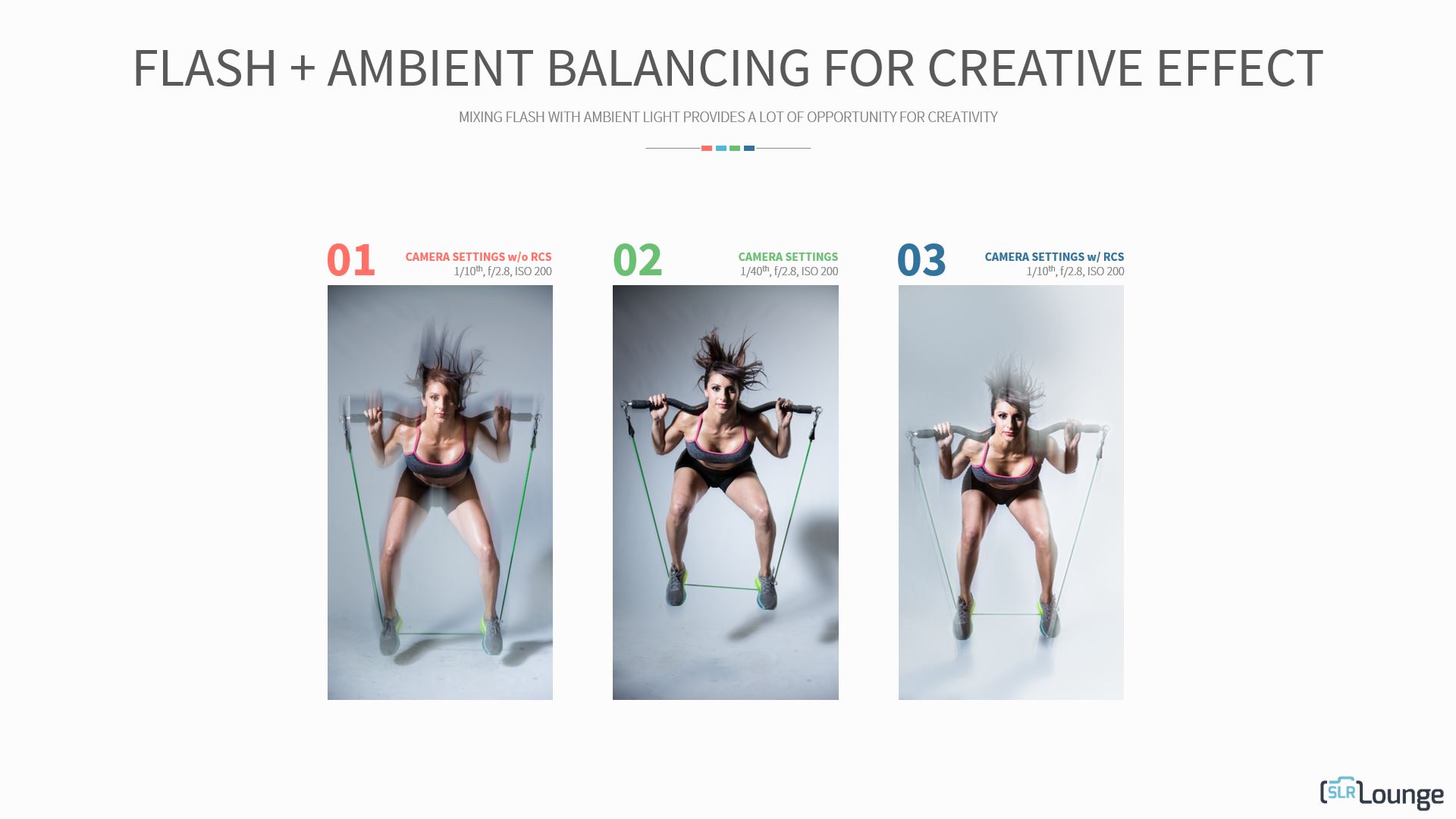 Now you can argue that everything that we do is creative, but what I mean here is using a bit of that kind of ambient exposure to either freeze or to show motion. We talked about freezing or showing motion in Photography 101; basically using your shutter speed to control what kind of motion you want to have in the shot. The cool thing about adding flash now, is we have an extra component. We can use shutter speed to show motion, and then we can use the flash to freeze certain components that we want to freeze. Because the flash again fires at such a quick speed.

Let me show you exactly what I mean. I’m going to go back a couple of slides, okay? Now over here on the left side, we exposed just for ambient light here. We had to keep the shutter speed so slow on this top shot that we ended up getting too much motion and it looks all blurry. For the bottom shot, we had to raise the ISO up so high that we ended up getting an unusable shot just to get our shutter speed high enough. Over here on the right side, we’re using purely flash. We even cut away all of that ambient light in the scene. So we’re shooting in pitch black, so we could demonstrate that if your shutter speed’s open for five seconds and it’s pitch black in the room and your flash fires, you’re still going to end up with a frozen image because there is no ambient light affect.

This was just a flash versus ambient light demonstration to show the differences in exposing ambient or constant light versus a strobe. More likely than not, most of the scenes that you guys work in are actually going to be kind of somewhat in between. You’re not going to typically working in scenes that are pitch black, you’ll be working in scenes like this, whether you have a bright background and your exposing for a natural effect, or you’ll be in scenes like this where you’re basically shooting in a darker area or you’re shooting and darkening it down in camera, and you’re adding flash for dramatic effect.

What about when you want a little bit of a balance between those two, where you can slow the shutter down, get motion and then freeze? That’s what we have here. What we’ve done here is we have Olivia in this exact same room. We placed one of the video lights basically, one of the lights that we use to light up the set, behind and to the right. So it’s basically on that right side. You can actually see a little kiss of that light on this shot right here from the back. That light is on throughout the shot. We have the exact same exposure settings on all three of these. For the flash, we’re firing it into a v-flat, and that v-flat I think our flash power is somewhere around 1/8 power. It’s firing at 1/8 power, let’s assume again the flash duration is 1/10,000 of a second. So it’s very quick. It’s going to freeze the subject right when it fires.

1/10 of a second, f/2.8 and ISO 200. The flash fires, and you can see her frozen where the flash fired. You can see the motion, where basically that ambient light was picking up while the shutter was open. Because the shutter’s open for quite a long period of time. She has this x-bar on her back, and as she jumps that motion is very quick, the parts of her that are frozen were hit by the flash and then the parts that are in motion are where the ambient light was effecting after the flash was fired.

Notice one thing here; this says without rear curtain sync, RCS. We’re going to go over the details of that more later on, but I want to talk about it briefly right now. When your shutter opens, it opens with front curtain and then it closes with a rear curtain. Generally this happens very quickly, especially if you’re shooting at 1/1000 of a second, the speed at which those two open and close is almost instantaneous. When you start slowing that shutter down though, that’s when things start actually happening. If we slow down to 1/10 of second, it kind of moves like this [shutter noise 00:03:53]. Like that sound effect? That sound effect was awesome. When the front curtain opens, the rear curtain will trail and close it off behind it.

Now look at this; right here we’re at 1/40 of a second, f/2.8 ISO 200. Exact same settings across the board. This time look; we’re not showing nearly as much motion from that constant light exposure from the shutter speed. Because now the shutter speed’s open for 1/40 of a second, there’s not as much time for the motion to be captured. So we see a little bit of motion under the bar, we see a little bit in her hair, we see a little bit underneath the feet, but not nearly as much as this first one. So we can use our shutter speed to control the amount of basically motion that we’re capturing in the shot while we’re using our flash to control how we freeze the subject.

I liked that first shot. I liked the motion there. But what I didn’t like was that the motion came after the flash fired. So in the final shot, we go back to 1/10 of a second, f/2.8, ISO 200. What we did here is the exact same shutter speed as the first one, the only difference is I turned on rear curtain sync on my flash. Rear Curtain Sync is a full feature flash option, which we’ll talk about full feature flash and manual flashes coming up, but that’s one of the options that only a full feature flash would have. What that means is just before that trailing rear curtain closes, that’s when the flash fires, at the very end of the shot. So we get this beautiful trail of motion; we get the motion happening and right at the end of the shot the flash fires and freezes Olivia in place.

So you have the motion, and then at the end of the motion, you have the frozen subject. Which is generally going to always give you a better result than firing the flash first and freezing and then showing motion after. It doesn’t quite look right. Here we get a really cool stylistic or creative effect by combining those two things, and that’s what I wanted you to think of. Most of the other shots that we’re capturing, they’re static shots. They’re shots where we’re just basically balancing for kind of the overall look, we’re not thinking so much to use or incorporate motion from ambient exposure versus freezing from flash exposure. But this is part of the creative potential of using flash, and I want to show you that here.