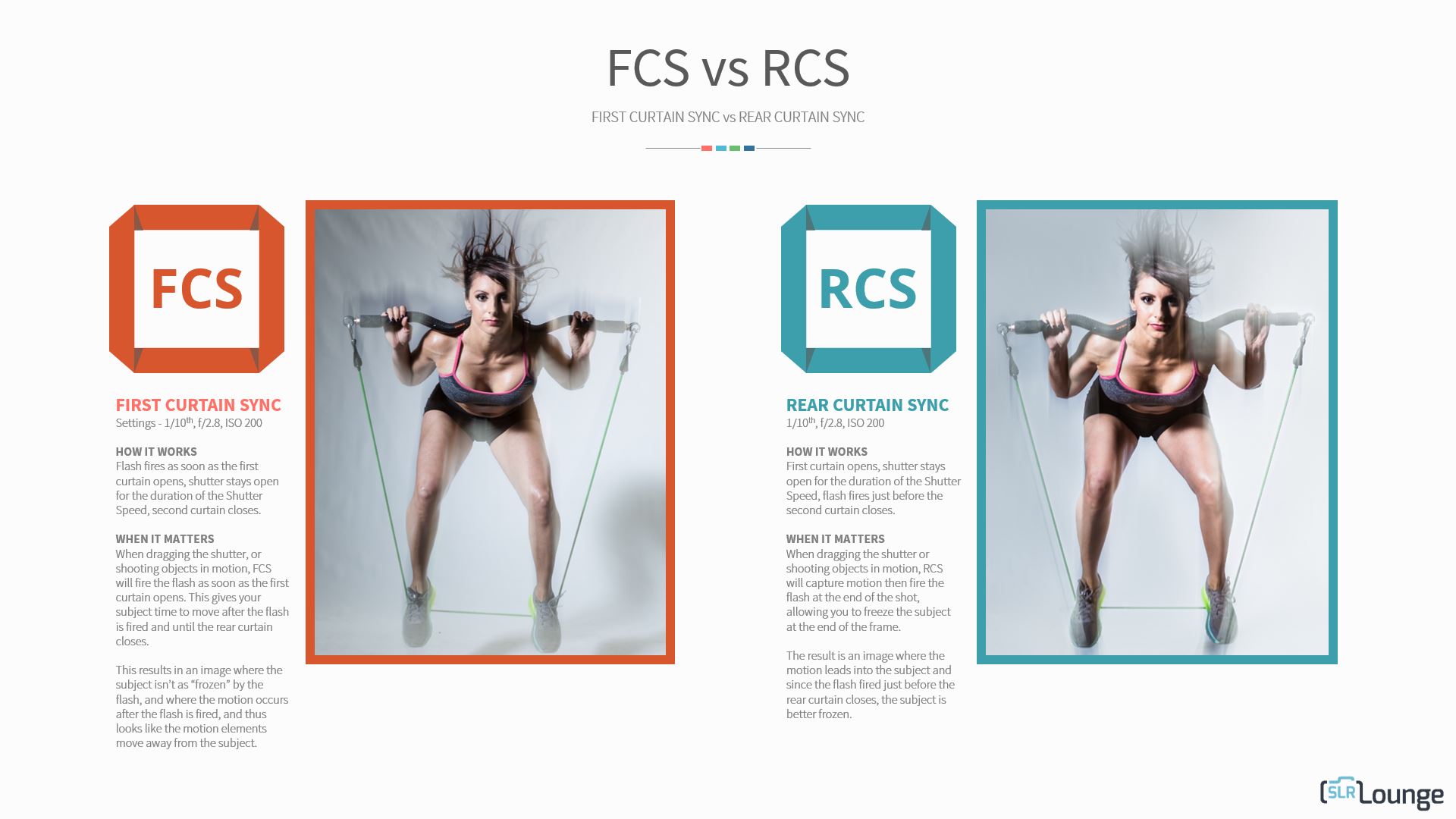 FCS and RCS, let’s take just a bit more time and discuss the differences between first curtain sync versus rear curtain sync. We’re going to analyze this shot just a little bit more. This shot of Olivia with a crossbar going across her shoulders was taken inside the studio, and basically rather than blacking out the studio completely what we did was we shot with some ambient light.

The whole goal here, is we want some ambient light to create some motion in the shot, we want there to be a little bit of light there. So when we drag out the shutter we get some motion, but we want to use the flash to freeze that motion. What we’ve done is to make sure that basically that motion that we capture looks good and looks decent and it also doesn’t blur the face, we actually place the light behind Olivia and off to the right side. That way the light’s basically gumming and acting more like a kicker kind of off to the side. It’s giving her a little bit of rim light and it’s also giving enough to her back that it creates motion when she jumps up and down. So it gives enough light in the scene that we get a bit of motion, but it’s not on her face as she’s going up and down.

Olivia’s motion is fairly quick. 1/10th of a second will give us a good, adequate time whereas if we slow it down too much … If we go to a half second, it might get a little bit too much motion because it’s just not going to look that great. She’d probably jump up and come down within that entire half second duration. All right, so with that set we go 1/10th of a second for our shutter speed. Our aperture is set to F2.8 and our ISO is set to 200. What I’m doing with aperture and ISO is, number one, you use your aperture primarily for kind of just your composition, but it’s also to gauge how much light you want to enter the lens.

We’re doing the same thing with ISO. I’m raising ISO just a little bit, above 100 ISO, just because I want the flash power to be a little bit lower. Now, if I wanted to, I could take the ISO to 400 or take the ISO to 800, and that would allow me to run the flash power down on my flash. Running with a lower flash power means that our flash duration, that instant where it fires, is going to be quicker. It’s going to be probably going to be at 1/16th power or 1/32nd power or around like 1/8,000th of a second. Which, is plenty fast to freeze the motion. Just remember, if you take a shot like this and you’re running your flash power at 1/1 … The flash power at one over one on a 580EX, on a Mitros, on a Nikon, SB910, on all these flashes at one over one it’s only like 1/300th of a second. Which, means that it’s probably not going to be fast enough to completely freeze motion at one over one power. So you want to drop that power down, so your flash duration will freeze and it’ll be quicker.

We can go up even higher if we wanted to. We could raise the aperture if we want to a little bit more as well, just for depth of field. At F2.8, as long as we get our focus it’s totally fine. All right. On this shot on the left, what’s happening again is that first curtain opens, the flash fires as soon as the first curtain opens up, and then the shutter stays open for the remaining 1/10th of a second. At that point it’s like 1/10th of a second minus 1/8,000th of a second flash duration. I don’t know. The majority of the time that the shutter is open, basically the flash already fired and then the shutter is open capturing motion. For that 1/10th of a second, until the rear curtain comes back up, and it closes off that shot.

So what ends up happening, is if the flash fires first, we freeze motion right at the beginning, but then the motion continues to happen after the shutter stays open until that rear curtain closes. Which, means we’re freezing and then motion comes after the subject. Typically, that doesn’t look that great. When the motion comes after the frozen subject, it doesn’t look very good in the final image. What we want is for the motion to occur and then the flash to happen at the very end, freezing the subject at the end of the motion. That’s what we have with rear curtain sync.

What do we do? If you’re using a Photix, you’re just going to go to the back of the camera, I’m sorry, the back of the flash. You’re going to press this little button at the bottom that says “SCS.” Some flashes call it ‘rear curtain sync,” on the Mitros they call it “second curtain sync.” Either way it’s the exact same thing, but I’m assuming because of trademark purposes and copy rights and all this good stuff, they all have to name it something different. Otherwise, people will get in trouble and these companies will sue each other. With rear curtain sync turned on, the curtain opens up. That first curtain opens, and right at the end of exposure as the rear curtain is closing, the flash fires and it squeezes in there freezing her motion. Here, the motion is trailing after the frozen image. Here, we have the motion that leads into the frozen image.

Let’s say at a wedding, if we’re shooting a wedding or event and we’re on the reception dance floor and people are dancing, I’m shooting at 1/160th of a second, it really doesn’t matter so much. They’re dancing and their grooving and their moving … That all rhymed, that was kind of awesome. It doesn’t matter so much if I’m using rear curtain or first curtain sync, because my shutter speed is at 1/160th of a second. When I slow down the shutter to get those dance floor drag shots, when I slow down the shutter to 1/10th of a second, 1/5th of a second, and I start spinning the camera and creating motion, which we’re going to show you how to do later, that’s when it’s going to matter. I want to make sure I turn on rear curtain sink so I get a better affect where the motion that’s captured leads into the frozen image. Okay, or leads into that frozen subject.