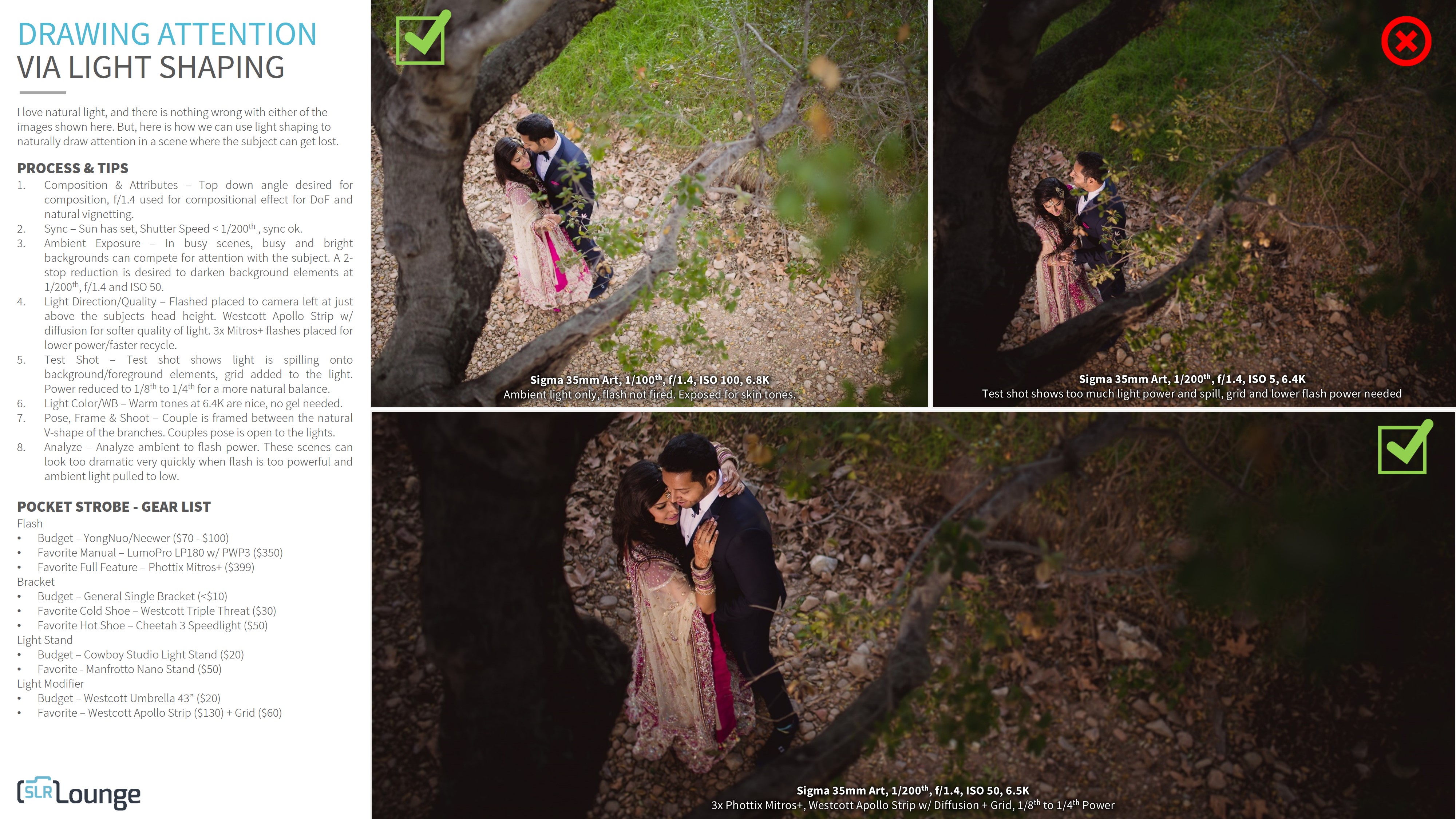 Drawing Attention in the Scene via Light Shaping | TRanscription

This technique and what we’re going to be talking about here is very similar. We’re doing the same thing that we were before with adding to existing light. We talked about something similar to this. I want to talk about the process and the steps as to why I made the decision to light this shot this way.

Let’s go ahead and just talk through overall, what the heck was I thinking climbing a tree. Our couple actually had a photo on their mood board that was a top down shot. We saw this little spot where there was this tree, and I thought, hey, it would be really cool to get up in this tree and to shoot down on you guys like that shot you had on your mood board, and get you guys almost in a position where you’re dancing or just hugging in an embrace. Just all about you two, but shot from a unique angle.

Yes, I made this precarious climb up this tree. Once I was up there, I had my assistant toss my camera. It was something I would probably not recommend to you, but we photographers do these kind of things. We pose funny when we’re taking photos, we have very strange habits of climbing things, and that’s just photographers in general. I’m not going to try and explain it.

All right, so for composition and attributes, compositionally, we wanted to shoot top down angle. Attributes wise, I wanted to shoot this wide open. So I grabbed my 35mm Sigma. This guy, my Sigma Art, and I wanted to shoot on this lens, particularly because it gave me a semi-wide look at the scene, while I could shoot it at F1.4 and get a tack sharp image and just have a beautiful looking photo from it. I had my Sigma on there, I had my Phottix Odin mounted, and I was using Odins off-camera, but I hadn’t decided yet whether I wanted them in the shot.

The point that I decided was basically, when I got up there and I took this first shot. I took it at 1/100th of a second at f/1.4 ISO 100, and again, I always like to start warm, generally, so I’m about close to 7000 Kelvin in camera. This is ambient light only, they’re posed so that the ambient light is coming directly into them, so we’re shooting with the ambient light direction as far as the way that they’re posed already. I exposed this for skin tones.

I love natural light. I love the way natural light looks. It’s fantastic, it’s great, it’s brilliant, but sometimes, in a scene like this, had the entire background been filled with this grass, and green leaves over here, and grass all over the background, I would have just left this shot as is, and it would have looked fantastic and impeccable with just natural light. But the background is these rocks and dirt and dead leaves and so forth, and there’s no way that we’re going to be able to clean that up. And guess what, her dress kind of matches that color of the rocks and the dirt, and everything like that.

They both end up blending into that a little bit too much. If the background were different, then I might not have chosen to light the image the way I did, but since it was that way, I thought, you know what, we need to give them a little bit of a kick of light, just because I want them to brighten up, so that the ground and everything else becomes less of a distraction. If your background and your scene isn’t working for you, then it comes down to light shaping, to make it work for you.

What do we do? I know that I’m going to be okay with sync, because with this shot I’m at ISO 100, I’m at 1/100th of a second, and so we ended up with 1/200th of a second F1.4 and ISO 50, so I know that I have 2 stops of leeway basically, between my ISO and between my shutter speed, and that’s most likely enough. I really only need anywhere between 1 and 2 stops to get the effect that I’m looking for. I don’t want to go any further than that, because then it gets too dark and it looks like Halloween shot, which I don’t want.

Okay. So, I’m okay on the sync speed. Ambient exposure, in this busy scene and brighter background, we’re basically bringing attention to the subject with a 2-stop reduction to darken everything down, but a 1-stop reduction would do similarly as well. It would at least do better this guy right here, okay? This one, actually, we’ll talk about that in just a second. Anywhere between 1 to 2 stops is totally up to you. I’d say, beyond that, might be a little bit too much for a happy wedding shot. Even at 2 stops, it looks a little bit on the dark side, but I’m still cool with that. That comes back down to that ambient versus light. Ambi versus flash balance. We want more natural look, we kind of bring the flash down, bring the ambient back up. We want more dramatic, we bring the ambient down, the flash back up. Anywhere between there is totally fine. I’ll let you guys decide on your preference.

Light direction and quality, we have our 3 flashes, we placed 3 Phottix Mitros, placed inside of … I always place 3 by the way, even though I don’t need 3 in a lot of scenes like this, I place them just so I have the power there. I have them on my speed bracket, and they’re placed inside of a Apollo Orb. With that Orb, we basically used … Or, I’m sorry, we placed it inside the Apollo Strip and we’re using the diffusion and the grid with that Strip. Usually, I’ll just defer to the Apollo Orb if I just need a small amount of light, and I’m dealing with a couple and not a large subject that I need to be lighting.

The light direction and the quality, we already know that the quality is gridded, it’s diffused, so it’s going to be a nice, soft light source. I’ve placed it just out of camera, right here. Why? Because wanted to follow the existing light. I wanted to just bring them up a little bit from that background, so I matched the existing light, as far as the direction of that existing light. Again, because we’re leaving ambient light, fill, we’re leaving all that stuff in there, we’re also making sure that we’re matching the color temperature, just by leaving it daylight, because our regular color temperature is just daylight over here.

We take our test shot, and this was actually the test shot. On the first test shot, I found that I had too much power, and there was also light spilling onto the background. You can see the grass getting lit up over here, we had the trees over here, was being lit up right there.

That’s the perfect situation for not only, number 1, a lower flash power, because I think we were at, what are we at, I don’t think I wrote down the actual flash power there, but we can put the grid and the diffuser on there, which is going to cut down power and the grid is going to control the light, so it doesn’t spill onto other areas like the tree and all the grass and everything. I just want the light to be on them. It’s a fantastic control device to really put the light exactly where we need it. With that test shot, I got a little bit better at balance over here, we have nice light on them.

Again, if I had this to do again, I would have taken one shot at 1 stop under, and one shot at 2 stops under, which was this one, and then decided in post which one I liked better. I still like this shot, I think it could be a little bit brighter, and we can always just brighten that in post, too. The detail is still there, it’s just been burned down a little bit.

All right, so this looks great. We have 3 Phottix Mitroses, the Westcott Apollo Strip of diffusion, plus the grid. We’re at around 1/8th to 1/4 power, with the 3 of these flashes firing in. Again, it’s going to depend on how many flashes you’re using. If you’re using just one, most likely you’re going to be at 1/4 power, if you’re using 3, you’re going to be at 1/8th to 1/16th, and so forth. Again, distance to the subject and everything.

If we compare these shots, the whole purpose of these chapter is to visualize what a scene is going to look like when we darken things down, when we add our own light. When standing up there, I know that the shadow areas of the trees are going to become mostly dark. I know that the green is going to become a deeper green and more lush green, by pulling it down. I know that the ground is going become a different color now, than her dress, which is what I want, because that’s who whole purpose of doing this, was to make her dress and to make him and her, their faces, stand out from something that was a little bit distracting overall.

Learn to interpret these kind of things, and to visualize what’s going to happen if I do this in camera, if I pull things down, if I add light. If I add light and it’s getting into areas that I don’t want, again, we have our grids, we have our control devices that we can use, to control and shape the light into the quality, the direction, into the size of the subject or the size of that area that we want to fill.