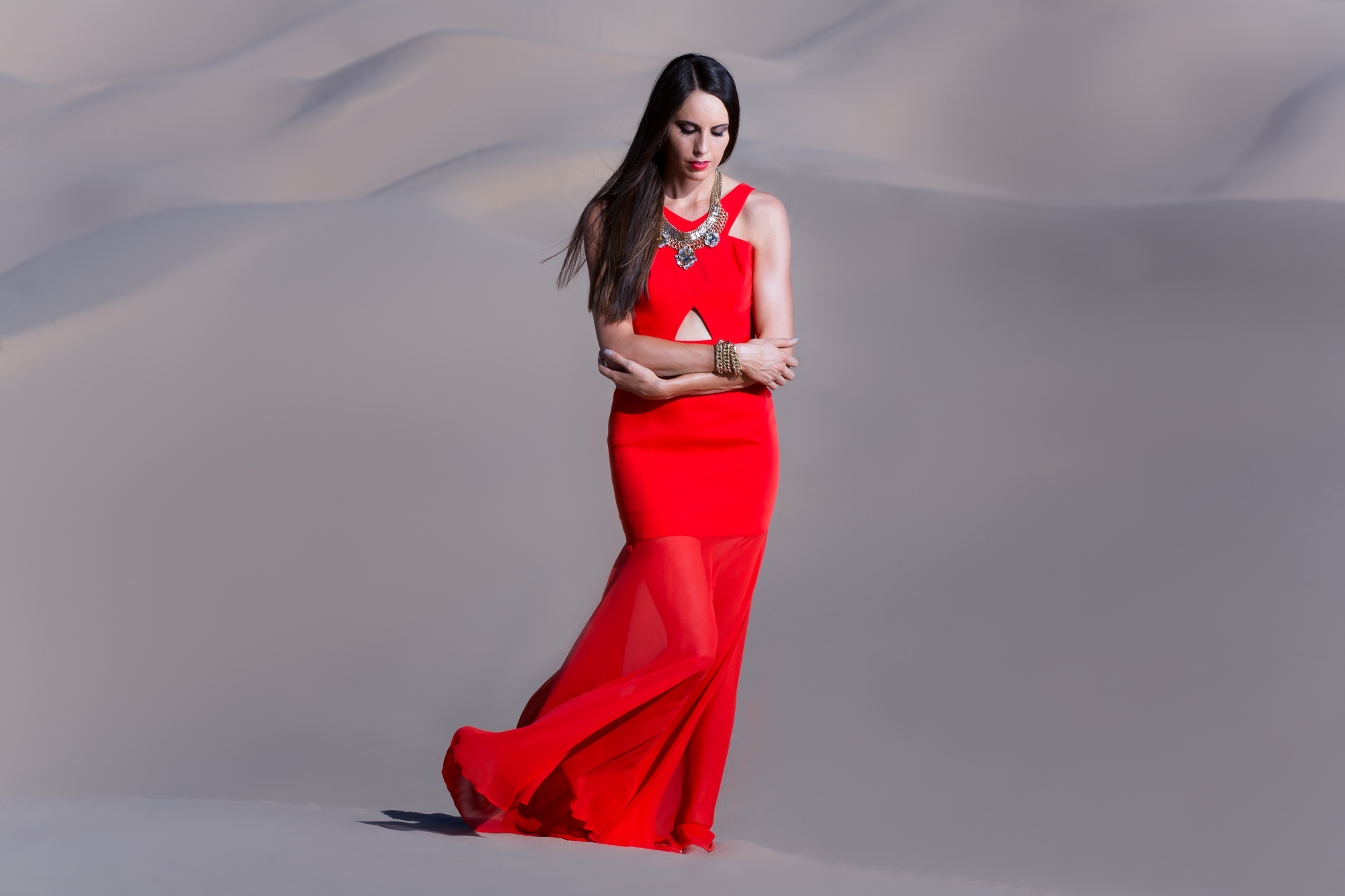 Look, I love Photoshop. I love dodging and burning in Lightroom, in Photoshop, everywhere. But if I can do it in-camera, I’m going to get better results and quicker results when I get it into post-production.

Here I have a little refinement example of essentially doing something that we have done before. It’s a similar technique. It’s the same technique of adding to existing light basically. We’re adding to the existing light direction, but this time we’re doing it with hard, mid-day sun.

We have Yvette out in the desert again. We’re shooting the shot with her in her red dress, this beautiful gold jewelry. I have her standing here on this dune. The whole composition, the whole thing that I’m thinking about is, I have my Sigma 120-300mm on loan, that gigantic mother of a lens that shoots at F2.8. If you don’t have that, use a 70-200. You get a very similar result.

What I wanted was to zoom in from another dune to zoom in onto Yvette at 300mm and fill the background with the waves of these dunes. To do this, I wanted to make sure that I could actually see the waves of the dunes in the background. I wanted to shoot at around a high aperture, anywhere between F8 to F11. What I found was that I needed to be at around F11. Why? Because it was so bright out that to get to 1/200th of a second for my sync speed, I had to be at F11 and even then, I still needed to be at ISO 50 to get to the right exposure.

I could have gone to F14, but I thought maybe I’ll stick with the nicer sharpness and stuff at F11 because that’s around where the optimal sharpness on that lens was. I’ll go down to ISO 50.

Okay, so we take this shot, and we get this beautiful shot. I have her in this pose where basically she’s holding her body across. Now generally I try and avoid right angles on the arms. The thing was, I actually wanted to use it in this case to frame her torso and the detail in the dress. We have this little triangle piece right above that, we have a necklace. I thought it did a really good job of that. It kind of brought attention to her jewelry as well.

I also had her kick the hip and swing the leg over so that we get this beautiful kind of arcing leg that trims down. Look how it trims down at the knees, which lets the hips open up. Then we kind of allow the body where we have kind of the skin on each side. We can see her form just opening up a little bit on the top. Okay, and then we let the train of the dress just kind of catch the wind and we have this nice pull going on.

When I get this test shot, I like my exposure. I like everything about it, but once again, she falls into the background in terms of brightness. She doesn’t stand out at all. Also I have very harsh shadow transition because we’re shooting with direct sunlight. I love direct sunlight. We’ve placed her in a way where that direct sunlight is coming basically from the front and side. It’s lighting down on her so we get a really nice direction of light to her face and everything. With the hard light, that’s fine. That’s great, as long as we place them in the right position. Hard light is absolutely fantastic. It’s a light that’s used for fashion a ton.

What I want to do is open it up just a little bit. I want to brighten her up. I want to open up the shadows just a tiny bit. Essentially, what I’m trying to do is dodge and burn in-camera. The way that I get there is I have my Bolt VB-22. We still have it on the SMDV Speedbox 60. It’s again another Rapid Box equivalent that can hold this flash a little bit better without letting the light spill out. I have Trevor, he’s holding it off to the side. Basically we’re lighting with the light direction in this second shot. We’re at around 1/2 to 1/1 power based on the distance to the subject. We’re putting down quite a bit of light on her. This was probably about 1/2 power, but we had him closer to the model. We’re putting down roughly a good 125 to 150 watt seconds of light onto her. That’s about equivalent to 2 to 3 pocket strobes if you’re running it through a modifier.

That’s a good amount of light. What you can see is that immediately it brightens her up. It lifts her off the background. It creates beautiful highlights along the right side of her body and face. It opens up the shadows. It even allows this shadow transition where, you see this cheek right here? It allows there to be a more soft shadow transition between the highlight areas versus the shadow areas. It looks amazing, and I love the way this looks in comparison just to that standard shot. It makes her just pop off the image.

I would have done the exact same thing in Photoshop, but for me to do this in Photoshop, to get from here to here, that would have taken probably like a half hour to an hour to do inside of Photoshop. To get from this to this? That’s like 15 to 20 minutes. All I had to do now is just clean up the background. I burned the shadows down just a little bit. I popped a little bit of the contrast, and just dodged and burned a little bit over the skin to amplify existing areas and kind of pull away from other areas, and so forth. We got to the final image within just a few minutes. Why? Because we started the process in-camera. If you can start the process in-camera, it’s going to be that much easier and that much better in the final result after the fact.

Okay, so light color, by the way. I left this at 4000 degrees Kelvin. This was an artistic choice, because I wanted this super white, neutral look to not only the sand, but also her skin tones. Once again, her red dress just pops right off the background. We already talked about the pose. We’re framing her dead center in the middle of the shot because again, I want her to command the presence of the scene. I want us to really focus on the dress and the shape that the dress is taking.

With this type of a shot, our main thing here is to zoom in and analyze where using hard light. We need to look closely at the shadows to make sure they’re falling in the right places. Look closely at the body position. The framing. Look at the pull on the dress. It’s a very complex shot. We want to make sure that everything looks fantastic. What you could do on this final shot also is, I kind of like the pull on this one a little bit more than this one. You actually take the bottom part of this image and just swap it out on the right side, too. We could do a little more Photoshop and manipulation to maybe swap out the dress, and maybe even the hair as well so we don’t have as many flyaways on this one. We can do a lot of work there to just tweak inside of Photoshop, but the whole point is get as far as we can inside of the camera, and then use Photoshop as that tool to finish up afterwards.

Hopefully this has been kind of interesting to you, because we’ve seen now how adding to light … Before, we’ve been adding to softer light sources. We’ve been adding to that soft, existing fill. We’ve been adding to other direction light. We had one example before where we did have a fashion shot where Yvette was looking into kind of sunset light. This is an example of just that hard, almost … kind of mid-day to mid-afternoon light coming down. It’s slightly directional, but it’s still very hard. We’re just amplifying it. We’re pumping it up. You can see what kind of effect that has over the background and how it makes the subject really just pop.

The Right Power for Each Scene