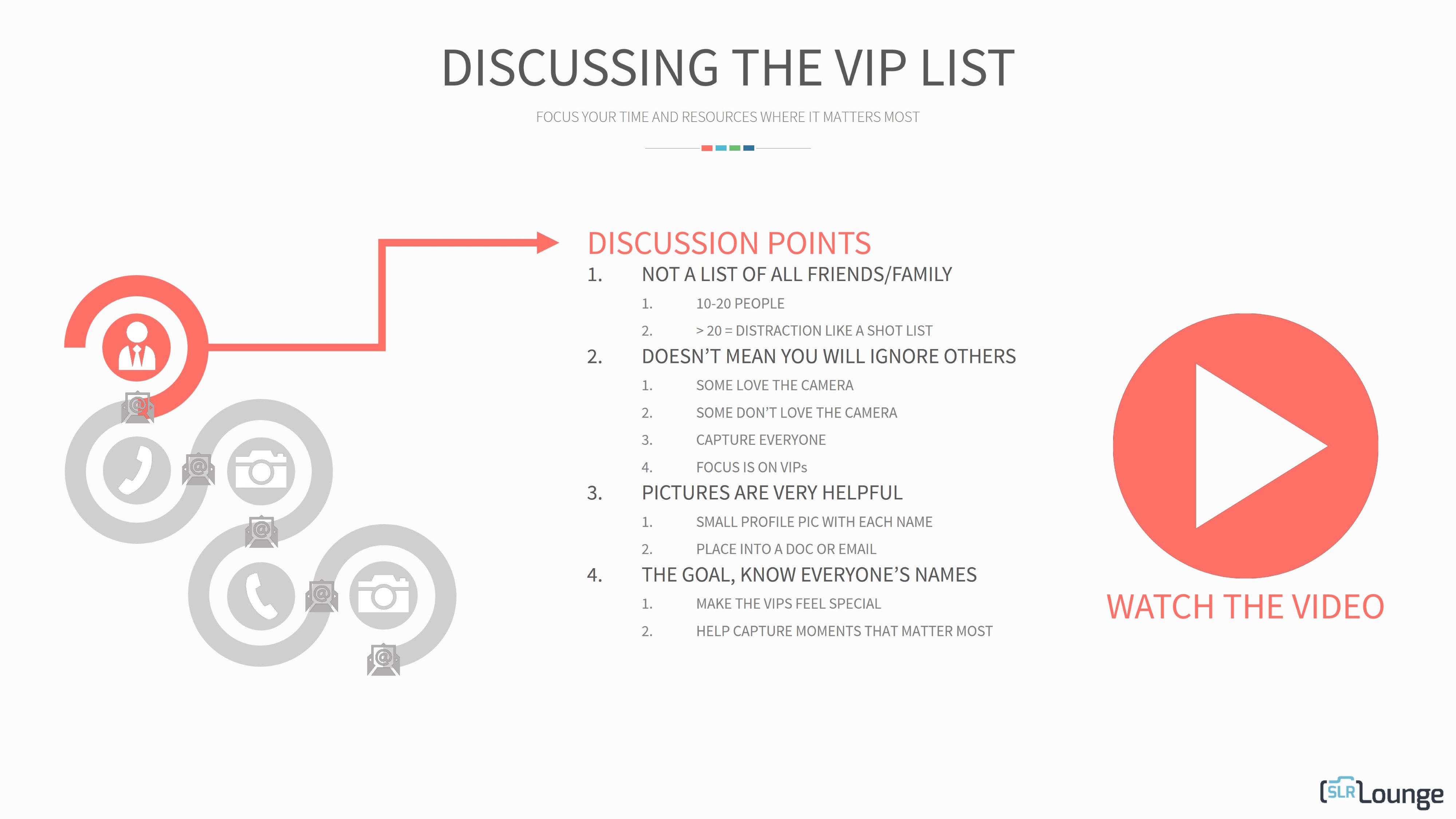 It’s time now to discuss the VIP list with Dana and Jessica. What are some of the key points that we want to convey when we are putting together or having the clients put together a VIP list.

Number one, this is not a list of all friends and family. We want the VIP list to be anywhere between ten to twenty people, if it is a larger wedding, like if it’s one of the five hundred person weddings then you can kind of expect that the VIP list might be thirty, forty people, but give it a number. Let’s say maybe ten percent of the guest list. That means on a thousand person wedding it could be up to fifty maybe even a hundred people on that list. Here’s the thing, if you’re doing a wedding that’s that massive, then you should have a VIP list that large, and you should study it, and you should paid well enough to make it worth your time to study that VIP list because it’s such a massive wedding and you want to know where to focus your time.

In general, I’m going to say that for a two hundred to two hundred fifty person wedding that we want around twenty people on the list, more so becomes a distraction. It becomes almost like a shot list where you’re just trying to figure it out, and granted if you’re a two hundred fifty person wedding and the budget is say, six to eight thousand dollars, or whatever it might be, they’re not necessarily paying enough that it merits studying a document for hours, and hours, and hours before the wedding. Whereas if it’s a thousand person or two thousand person wedding, then it does merit, the budget merits spending that additional time to study this. Again, roughly ten percent, five to ten percent should be your rule of thumb, but twenty people is what we found is most common and kind of ideal for us.

It does not mean, and I want to make sure that I convey this to the bride and groom, it does not mean that I’m going to ignore other people at the wedding. What it means, for the bride and groom, or what I like to tell them is that, “Look, some people love the camera.” You might invite a friend and their plus one is going to be this gorgeous girl who just loves getting her picture taken or maybe someone’s plus one is going to be a guy who’s kind of a D-list celebrity, and you guys don’t know them, you don’t really care about them, it doesn’t mean that we’re going to ignore them, it means that we’re going to get a few shots and then move on to other things. We want to make sure we’re not hanging around those moments when other people that are VIPs, and close to the bride and groom, and close to the family are being ignored.

Some don’t love the camera and often times, those that don’t love the camera are the ones that are closest to the bridge and groom. If you use that as a gauge of who you should be photographing, you’re going to do exactly the opposite of what we’re trying to do. Most of the time people like parents, and brothers and sisters, they’re not going to hang out in front of your camera the whole time, wanting to get their photographs taken, so we want to make sure we know who they are. We will be capturing everybody, we will simply be focusing our efforts once we have the other shots on the VIPs.

The other thing is that pictures are very helpful. If you send me a VIP list with just a list of ten names, yeah I can kind of get familiar with the ten names and know the relationships, but having the pictures helps me to put a name to a face, and again, it’s not something that I want to memorize and show up, and be like … This is the weird thing, when you get to a wedding, even if you did memorize the VIP list and the bride’s sister’s name is Sue, don’t go up to Sue and be like, “Hey, Sue. My name is Pye,” without ever having met Sue. That’s kind of weird in my mind because then you go, “Oh yeah, I knew your name because I studied it from a document, that the bride sent me, and then I got on your Facebook profile.” Don’t worry. It puts you in an awkward situation right off the bat. If you introduce yourself, “Hey,” and then she goes, “My name is Sue,” and you go, “Mm-hmm (affirmative). I already knew that.”

You say, “Hey, Sue, it’s great meeting you,” but guess what, now you’ve already internalized it, she said it again, and now it’s so much easier to remember her name throughout the day. By the end of the night, you say her name, “Sue, it was so great having you. Thank you so much for helping throughout the day. I really appreciate it, you’ve been absolutely amazing,” and she gives you a hug because she’s like, “I’ve been to five other weddings and no photographer has ever bothered even knowing my name.” That’s the whole goal. Place these pictures and their names into, and we’re going to put it basically into our condensed itinerary, but you can ask them to simply place it into a document or an email to send it over to you to get the information to you.

Once again, the goal is to know everybody’s names. We want to make every one of these VIPs, those are the closest to the bride and the groom, feel special, feel like they are important to us because they are, and appreciate them in the same way that the bride and groom appreciates them and capture the photographs so that we help capture the moments matter most to the bride and groom. In other words, we know where to focus our limited time and resources. That’s it, let’s go ahead and actually watch the discussion of the VIP list with Dana and Jessica.