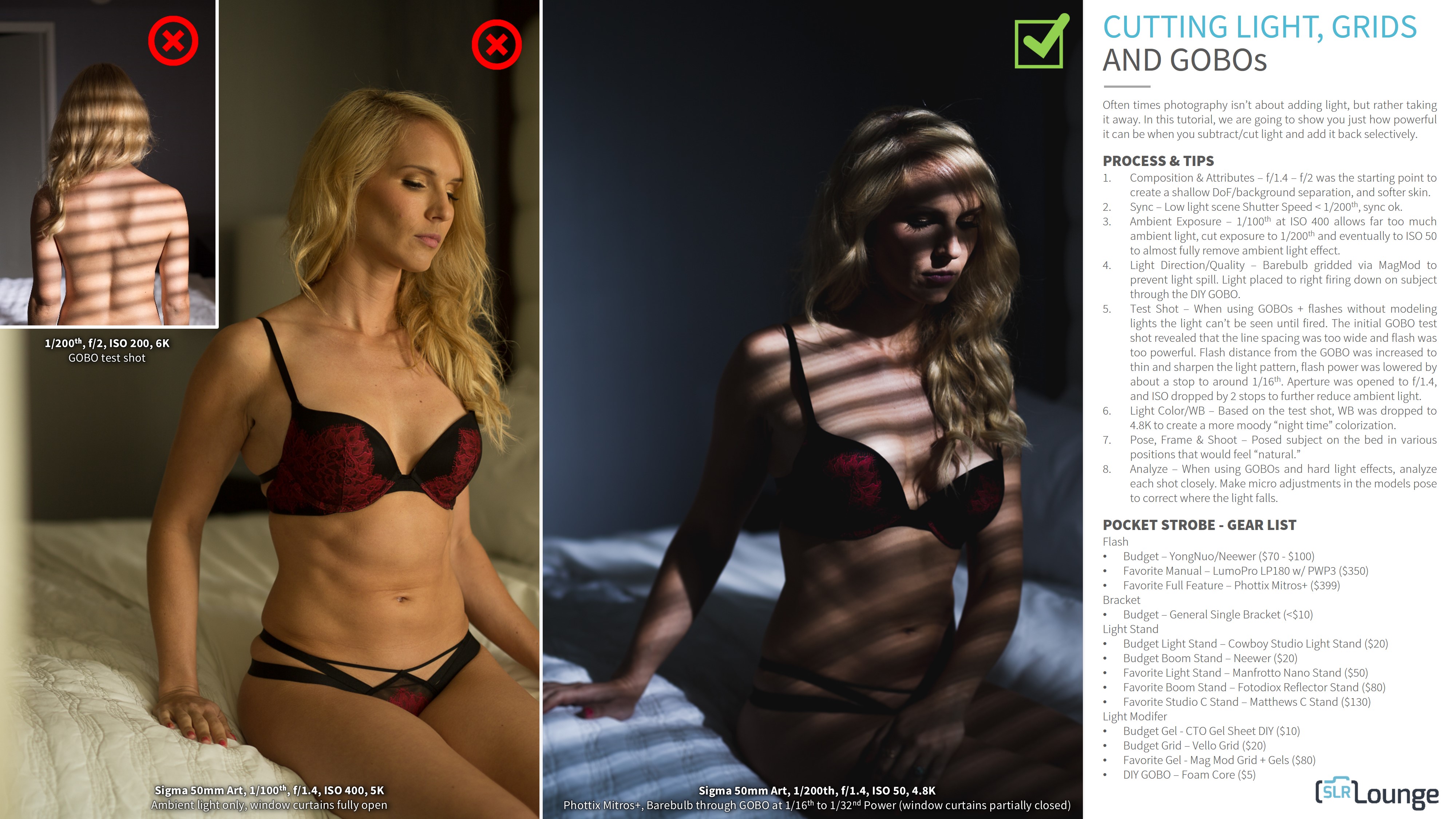 In this video, we are cutting light, we’re adding grids, and using gobos. Essentially what we’re doing now is we’re building into that final technique that we want to present to you before we get into all of the other videos at chapters five and six, where we basically go through and show you how much a scene can change with light modification, and how to refine that light.

This is the perfect video or the perfect tutorial to lead into that, because you’re going to see just how much this image changes from shot to shot, from start to finish, using these techniques. Oftentimes photography isn’t really so much about adding light. It’s more about taking it away. It’s about taking it away and then selectively adding it back as needed. You’ll find that when we dive into things like product photography and other genres of photography, we’re going to actually be subtracting light just as much as we are adding it. For this shot, I want to show you just how dramatic a change that we’re going to have.

We’re shooting a fine art boudoir type image in this scene. Essentially what I want to do is create this beautiful moody nighttime look where it looks like there’s light coming through blinds and so forth. What am I thinking? Number one, as far as the composition and the attributes go, we’re going to shoot this at F1.4 to F2. That’s our starting point. We’re on the Sigma 50mm Art. We’re shooting it and we’re intending, why do we want that depth of feel? I want it to be focused on her. I want to be focused on our model. I want it to have soft skin. I want the background to fall away. I want to know where she’s at but I don’t really want anything in the background to detract from her.

That’s why we’re choosing a very shallow depth of field to start things out. I believe in our test shot we started around F2 and then in the final shot I went down to F1.4 just to even further smoosh out the background and soften the skin and detail. With Sink we’re in a low light scene. We’re shooting in a hotel room right now, so we have complete control. We’re running a shutter speed of, let’s see here, one two hundredth of a second. This is slower. That’s the test shot. We’re running at one two hundredth of a second mainly to control the amount of light coming in the room. We want to basically cut away light. You can see this. From this shot right here, this is the 50mm. Same everything. Same angle, same everything, pose and all that. This is at 1/100th of a second at F1.4 and ISO 400, just so you can see what the ambient light, this is more close to what it looks like in person with that ambient light.

We stopped it up just so you guys can see that look. With it stopped down to one two hundredth of a second, F1.4 and ISO 50, all that ambient light in the scene just gets cut away. We’re left with this deep dark background. We’re left with all the shadow in the image and that’s all gone. What are we doing now? Our ambient light exposure, we’re at 1/100th of a second at 400. You saw that side. We’re cutting that exposure down to 1/200th of a second. Eventually down to ISO 50. We take another test shot, just to test out the light and the gobo. What are we using for our gobo? It’s this guy. Just out of a piece of foam core, we cut out these lines in it. Now, if you want this to be a little more pretty do a better job of it.

I had one of my assistants a while back do this, and of course it’s a little bit messy. Not exactly straight edges and so forth. Our lines or course aren’t exactly perfectly straight but if you spend a little more time on it you can get it even better. This is our gobo. What does that mean? A gobo simply is a go between object. Gobo for short. What we do with the light direction is we’re placing a bare bulb flash. I have my Phottix Mitros placed up on a stand. I’m using my Magmod. Why? It’s simple, it’s easy to use. I just pop my grid right on there. The grid is going to prevent that light from spilling out all around the gobo. I’m going to place that flash up on the stand and then I’m going to use the gobo as my go between object. Guess what. Can you guys guess which side I’m going to use? Black or white?

Hopefully you guessed black. Why do we want to use the black side as opposed to the white side? The white side, if we fire into it, yes, it’s going to be a gobo object. It’s going to let that light through but it’s also going to refract a lot of this light around in the scene. I don’t want that. I just want it to hit the black. I want the black to absorb that light, not balance things back, and then for it to let that light through through those slats in there. Now, there’s a few key components to get in your head when you’re shooting and using gobos. Number one is the positioning and the placement of the go between object itself. When this object is closer to the subject it’s going to create a more defined and smaller pattern then when you pull it away from the subject. When it’s pulled away from the subject the light has a chance to open up more.

It opens up and it gets broader but when it’s brought close to the subject that light gets more tight and you end up getting a smaller pattern and a more defined pattern over the subject. The second thing is the distance from the flash to the gobo unit. It operates the exact same way that I just described on the other side. The further this is pulled away from the, it operates in the exact same way but in reverse I guess. It doesn’t operate the same way. The further this is from our go between object the more tightly defined that light is going to be. Why? Again, it’s a smaller light source from out here. It’s going to be a harder light which is going to create more defined lines versus when I bring it up close, it becomes a softer light and you get more light wrap or less definition.

I really thought it look cool and it gave me an idea of what my ambient light exposure was going to be and so forth in the scene. Then I simply ended up cutting down a little bit more of that ambient light. We went down two stop with the ISO but then we opened up with one stop at the aperture. It’s one stop darker than this. At that point basically I just had her change into the outfit that she’s going to be wearing for this scene while I finished setting everything up. Let’s go ahead and go on to white balance and the light color. Based on our test shot I don’t really need to do much to the white balance. I cooled it down a little bit. This is at 6000 kelvin. I took it down to 4800 Kelvin, just to give it a little bit more of that blue and nighttime type look to the image.

To be honest, if you left it warm versus night it’s really completely up to you. Stylistically, I wanted it to look more like nighttime. Once she came out and changed I had her sit back on the bed. I removed the light, that lamp from the background. Why? It wasn’t necessarily adding anything to the image. If something’s not adding to the image than most likely it’s going to be taking away from the image. I had them remove that light out of there. We pose and we shoot so that that light lands right on her and it just grazes across the eyelash. We see it right there on the eye. I want to see that definition in the eyelash. How the heck do we do that when these guys don’t have modeling lights built into them? This doesn’t have a modeling light built into it.

What the heck do we do other than just taking shots over and over again until we get the light in the right position? That’s where, again, we talked about in Lighting 101 to use that flash test button which on your 5D Mark III, it’s right here. Just look up wherever that button is on your camera and what that’s going to do is it’s going to fire off your strobe in a quick succession. Basically just fires it off about a half a second to a second worth of quick rapid strobes that allows you see where the light is falling. I essentially use that flash test button as my modeling light. I’ll adjust my model’s position. If I need to I’ll adjust my flash position. I adjust my go position and everything to get everything in the right place and I have pretty much a built in modeling light.

It only last for a second or two, mainly a half second to a second every single time I press it but it still works and it gets me to what I need. Once everything was set up we pose, we frame to get this shot. How do I pose her? I posed her in a way, I basically told her, imagine if you were to get up in the middle of the night and to sit on the side of the bed, what would you be doing? She had that pose. I brought the arm across the body, had her rest one hand there, just like she’s about to stand up, essentially and then keep the eyes closed. Again, I’m not trying to draw attention to the eyes. I want this to be really more about the scene. We shot our images and from there we analyze every shot closely, because we’re shooting with hard light. We’re shooting with gobos. We need to make sure our shadows and our highlights are in the right places and then we make micro-adjustments in the pose.

That’s the easiest way to make adjustments in this type of scene. Once you have the gobo and the light source in the right place just make your micro-adjustments with your model, use your test button just to make sure that it’s in the right place and then keep firing away. Just watch them closely and shoot. What you get is, look at this, just plain shot that we have over here on the left side. There’s nothing wrong with, again, shooting natural light and getting these kinds of things but the whole point of this is to show just what light can do and what it has the power to do. We’re going to step into the next chapter and go even further in helping to analyze how much a scene can dramatically change by adding your light.