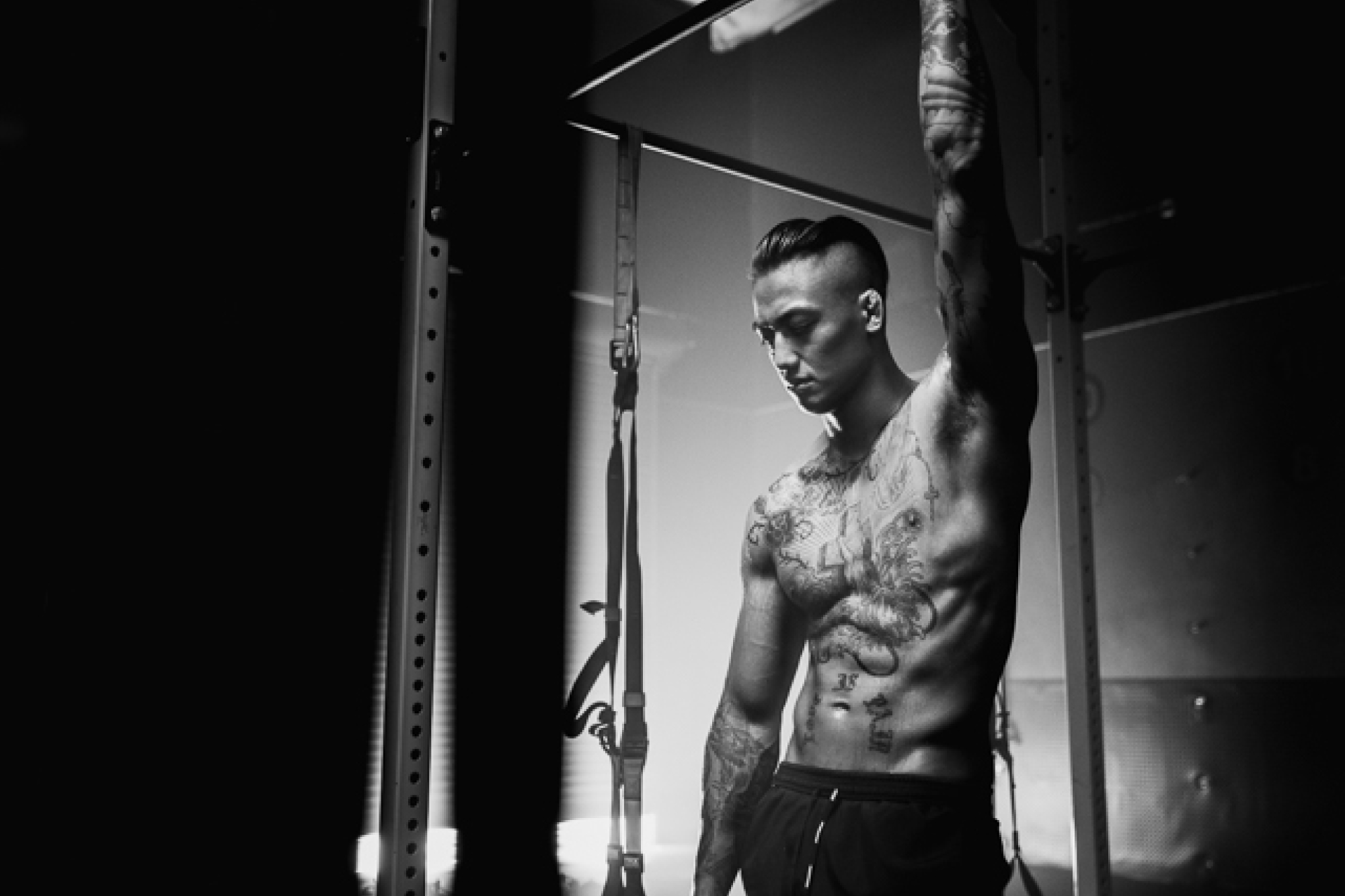 Case Study Number Six is all about working the angles when shooting. Remember that after you get your lighting set up, not to just shoot in that one basic position that you start with, but to move around your subject or do what I call, “Work the angles”. The reason for this is that after I set up my lighting, generally what I like to do is just work the angles.

The biggest help that’s going to get you there is your Grid or your Snoot to be able to push that light into the place that you want. This is a very reasonable and practical approach still to do with on-camera flash. I wouldn’t be telling you otherwise if it weren’t.

Once you get the set up, we’ve already talked about how we set up this first shot. We put the V-Flat up onto basically our two C-Stands. We’ve lifted up these Matthews C-Stands to get them up really high. We have them hold the bar and we shoot bouncing off of that V-Flat.

This is fantastic. This is my safety shot. We got this shot at, let’s see. Let’s take a look at how it was shot. 1/30 of a second f/2.8 and ISO 800 on the 24-70 Mark II. V-Flat’s overhead, we’re at 1/4 to 1/8 power, and again we’re balancing our shutter speed, because we still have the garage open on this left side and I’m getting a little bit of that ambient light. I want to just pick up some of the ambient light for the background. I don’t ever want my backgrounds to fall to pitch black.

Once this is all set up, I have him lift and we get this safety shot, him looking in. I also get shots of him looking down, because I don’t like necessarily that the eyes are all raccooned out.

For this type of a shot, it’s okay because this is more dramatic, having the eyes dropped to that shadow looks a little bit more sinister and kind of a little bit more just, I don’t know, like evil. Not evil, but it fits for this type of an image, because he’s a boxer and he wanted to look tough and powerful. That’s the right word, not evil but tough and powerful. He probably wouldn’t appreciate me calling him evil. I’m sorry Jeremiah. I did not mean to call you evil.

All right, so let’s go into this. Once I get this set up, I go okay, now let me start working the angle. I’m going to go off to the right side a little bit. As I move, my flash head simply does this. I’m bouncing like this and all I do is I’m moving off to the right a little bit working with the Grid and I just kind of angle it a little bit now. I’m still getting that same bounce and I fire.

Notice that kicker right there. You see how we can see the kicker on the left side in this shot, but it’s much less pronounced. Do you notice how as soon as we move to that angle, I lower his hand and now we have the kicker along his face and along his arm and body all the way down. We see a little bit of this highlight in the back kind of revealing a little bit more depth in the room.

Then I move to be even more directional. I crop across so we have like all these straps in front of the shot, and we have kind of this great voyeuristic look into this boxer as he’s training, and just resting as he’s holding onto this bar.

The highlight from the garage kind of fills the fog up right behind in which creates a beautiful highlight behind him, which draws attention to the frame. The exposure is so … It looks fantastic. We have this little bit of like kind of Rembrandt lighting with the light on the other side of his cheek. His eyes are looking down, so it doesn’t bring attention to the shadows in the eyes. We have great muscle definition from that top-down light. Everything looks fantastic in this shot.

Once that shot is set up, I start moving around and kind of working the angles, finding other spots to shoot from. Slow things down, guys. Again, I’m going to say it again, the number one thing I always tell my people is to slow down. Don’t feel like you have to just sit there and move from shot to shot to shot and just bang, bang, boom and get all of these different looks.

Jeremiah, The 12, the training center, they need two or three shots. They don’t need fifty. My focus is slowing things down, getting a few great shots. Once they saw this, they were like, “That’s incredible.” I go, “Oh yeah, this was for lighting one-on-one. By the way we did this just with one on-camera flash.”

They were like, “That’s incredible. We can’t wait till we do the big.” We did this big epic shoot, which we’re going to have for lighting two on one, and also a fitness DVD as well on how to do fitness photography. It blew them away that we could do all that, which is a single on-camera flash.

For this entire shot, again, we had our C-Stands holding our V-Flat. There’s no other fill or anything like that. We just have that background light that’s added from opening the garage a little bit. We used our Rosco Mini-V to fill the room with a little bit of fog, let it dissipate, use a fan, use someone like using a reflector to kind of waft it.

Whatever you want to do, let it dissipate so that you have that nice bit of haze in the background, rather than having defined smoke, okay? Final shot 1/30 of a second, F2.8 ISO 800 and we’re at one-quarter to one-eighth power, and we got all these different shots with this exact same setup. We’re just black and whiting it in the final post.

That’s it for working the angles. Please take this into consideration and make sure that you don’t leave your scenes too early. After you have everything set up, use that light and take a few different shots, work the angles and you’re going to find that oftentimes, the best shot is the one that you initially thought of.