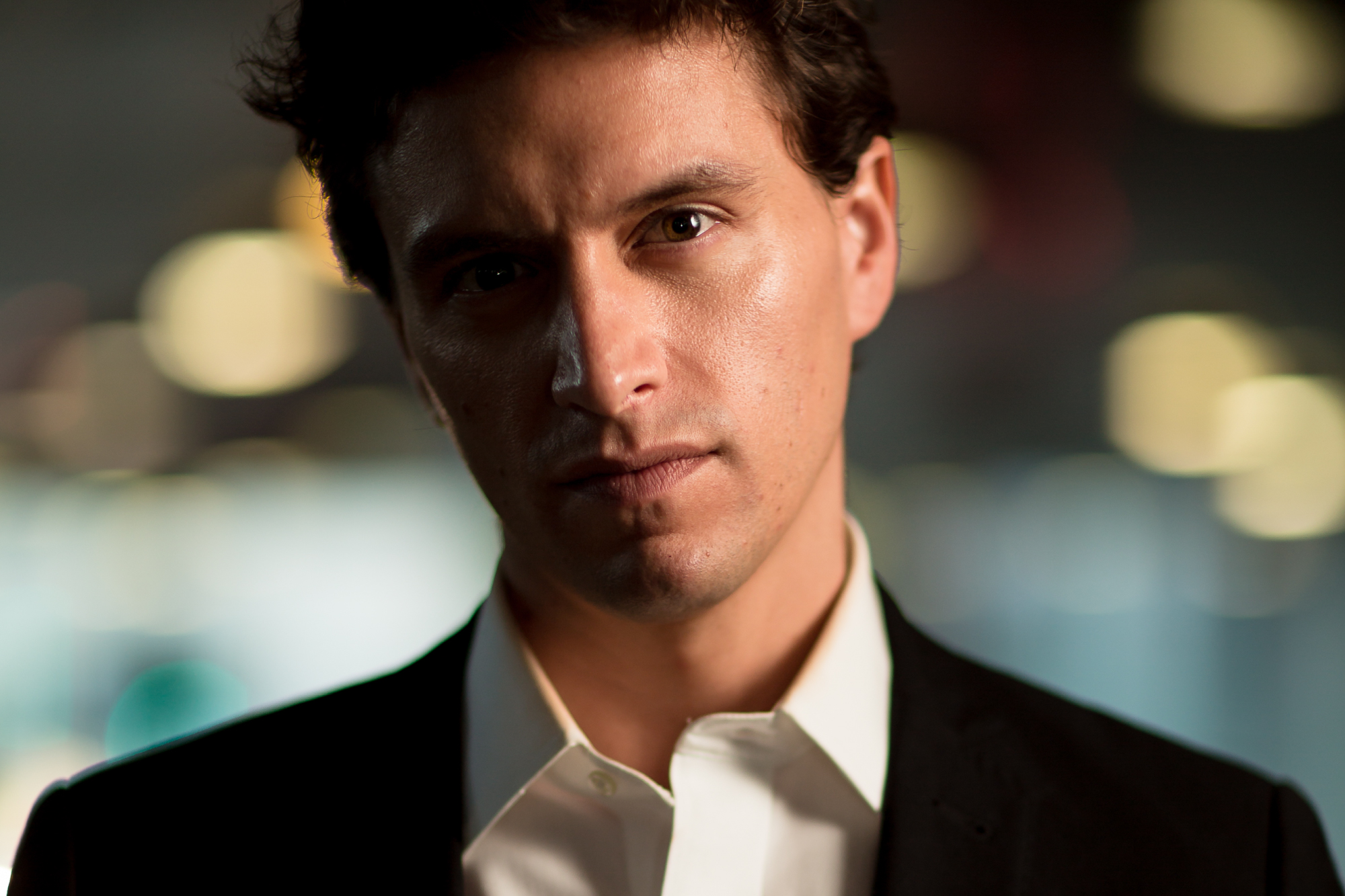 Anytime I’m out on a shoot I always ask my clients if there’s any shots in particular that they might want or need. Now generally we cover that also in the mood board discussion but it’s a little bit different when we’re out on a shoot because sometimes certain things might pop into their head or there might be a specific shot in a particular location that they’re thinking of.

In this specific instance, Matt and Laura they’re both actually actors and well an actor an actress, and when I asked Matt he said, “You know, I would love to have kind of a more cinematic headshot and I just played the part of Scar in an upcoming Lion King production.” He’s like, “For some reason I keep getting cast as this like kind of villain and sinister look,” and Matt is like one of the nicest guys I’ve ever met, okay? So when you talk to him you totally wouldn’t get that vibe, but when he gives you that deadpan stare you’re like, “Yeah dude, you could play the part of the bully.” So he’s like, “I want that kind of a dramatic, cinematic headshot that kind of conveys that.” I go, “Okay no problem.” In my head, what am I thinking? Well if we’re thinking about the lighting set-up what are we going to have the key light do for this kind of a shot? The first thing that should pop into your head, dramatic sinister, I want more shadows, okay? We end up needing to go to the shadow side of the spectrum where we’re shooting with split lighting or say Rembrandt lighting, that’s what’s going to convey that type of darker emotion leaving part of the face in shadow to kind of convey the duality of personalities.

The first thing I’m thinking is I probably need to be in a location, I need to be in a spot where it’s maybe not dark but it’s dark enough that an on-camera flash bounced into something could be a primarily light and I could darken down everything else. Where it’s midday right now so I can’t do it in just an outdoor spot, I wouldn’t have enough flash power with just an on-camera flash to be able to pull down that background enough. In just glancing around after he says that, I notice a bridge. I’ve shot under that bridge before and I see I think okay that bridge actually has a decent what we refer to as an up-ground. An up-ground is background that’s above you so when you get low and you shoot you have a nice up-ground on that bridge. I thought you know this perfect because the other thing I need to do to make him look sinister and dramatic, I need to have him looking kind of down on the camera a little bit, so I want to get a little bit lower than him and shoot a little bit above, shoot a little bit kind of bottom-up on him so he has this dominating presence over the camera.

We go over to the bridge, now once we’re under the bridge I have this beautiful ceiling that kind of has this silver lines and stuff, we have little lights in the background which will look fantastic, I know Boke it out okay so I had a very shallow depth of field we have this really nice look.

Now it comes down to positioning. This is again getting to that refinement side, being able to see and notice these types of things before you start shooting or after you take the first shot and then make an adjustment. So what do I want? I have my on-camera flash here and I know I want this as my main light but I also want some other lights in the scene. I want there to be a kicker. I want there to be a light on the side of his face or on the back just to kind of fill and create detail there.

I noticed that off to the left side if we’re looking off to camera left there’s actually kind of a concrete opening, a concrete window or whatever and it’s allowing daylight to kind of come in. So I had Matt stand in a way that that daylight basically if Matt’s standing here, the daylight’s kind of right there and it’s coming through and hitting him right on the side of the face right there. What is that doing? Well I just found my kicker didn’t I. The kicker hits him right there, I expose for the background, what do we get for that exposure? We’re at 150th of a second F1.6 and ISO 200. We’re on the 85mm Mark II lens the Canon version of it and again we’re at F1.6 because I don’t necessarily want to have to deal with focus issues, I know 1.6 is already getting me ton of Bokeh and it’s going to be already difficult enough to focus, I don’t want to go down to 1.2 and get too soft of an image.

I could have gone up as high as I wanted to, honestly if I had more time I would’ve liked to shoot this same shot at a higher aperture as well, at F 7 or F 8, but this is at least that one basic shot that I need to have before I went over to get Laura’s side and then we had to go onto the rest of the shoot.

I take a shot and I notice that we’re getting a little bit of flash spill. What do I do? Pop on a grid. Pop the grid on so that way when I bounce because at this point if you guys are matte that reflector is right next to you or off to the side and once again if I don’t put this on well, if I leave this off, you’re going to see that the flash is going to spill into you guys okay? So you can see that flash is going to spill. With this on, the flash goes right towards the reflector and you guys won’t see it. We’re flashing at about 1/8th to 1/16th power. If I was at F5.6, F7.1, I could easily go to like say 1/2, 1/4. even up to 1/1 power and still get enough flash power in this type of a scene for a dramatic shot with more background and focus and so forth.

We end up getting these shots. I had him kind of play with his cuff link a little bit and kind of look down the camera, make a couple adjustments, move the chin off to the right side a little bit so that way we get a little bit of Rembrandt on this side of the face, and I love both of them.

Now, the subtle differences in the shot that really in my mind put it together and make it work is this little bit of a kicker on the left side of the face, okay? This little kicker right here. Without that light we want to show duality of personality, we need to show the light and the dark side to kind of get this type of a look in an image. Without that kicker we don’t see any form in the dark side of the face we just see it go pitch black basically. With the kicker we have a little bit of form and a little bit of drama like extra kick, has this blue touch to it, it just looks absolutely wonderful and that small little bit of highlight is what in my mind truly makes this image. It’s something that could totally go unnoticed very simply if you’re not looking for it, if you’re not intentionally setting up.

What in all of the gear what did we use for this shot? We used our grid, you can use the MagMod, you can use a Vello you can use whatever you’d like. We use the grid to prevent spill into our subject. Once again, we’re in a dark dark scene where yes you could be using a manual flash but it does help to be using a full feature flash that has auto focus assist, we’re on the 580 EXII. We’re doing a Wescott, we have two Wescotts, one 40-inch white being held over a 40-inch silver so that way we get a little bit more light kick from it but it’s still kind of a softer light.

A silver light a more dramatic light would’ve worked in this scene the only thing was Matt doesn’t have makeup on right now and without makeup a silver might end up being too harsh because we’ve been walking around for a little bit, our skin’s a little bit oily we’ve been sweating a bit, I don’t want to accentuate that in the shot even more, so I go for the white so that way it’s a little bit more of a diffused light so we don’t accentuate those features as much because, had he had makeup a silver would be totally fine it would be great but otherwise it’s going to accentuate things that we don’t want to or that we would later need to fix in post-production and I want to prevent that.

All right, final steps, get your background shot first, figure out where you want to shoot, what the position of your subject is going to be and look at the lighting that exists in that shot. Then from there, add light to the shot as needed. One thing I want to mention, you notice that the kicker’s coming from the left, well if I added my light from that left side what would’ve happened to the kicker? It would’ve gone completely away so I set him up for the kicker and then I bring the light over the other side otherwise I’m going to be overriding the existing light and overriding my kicker and then this side I have a dark face, right? This side there is no light so I take that shot and then I work with the existing light placing my light to accentuate and to compliment what’s already there.