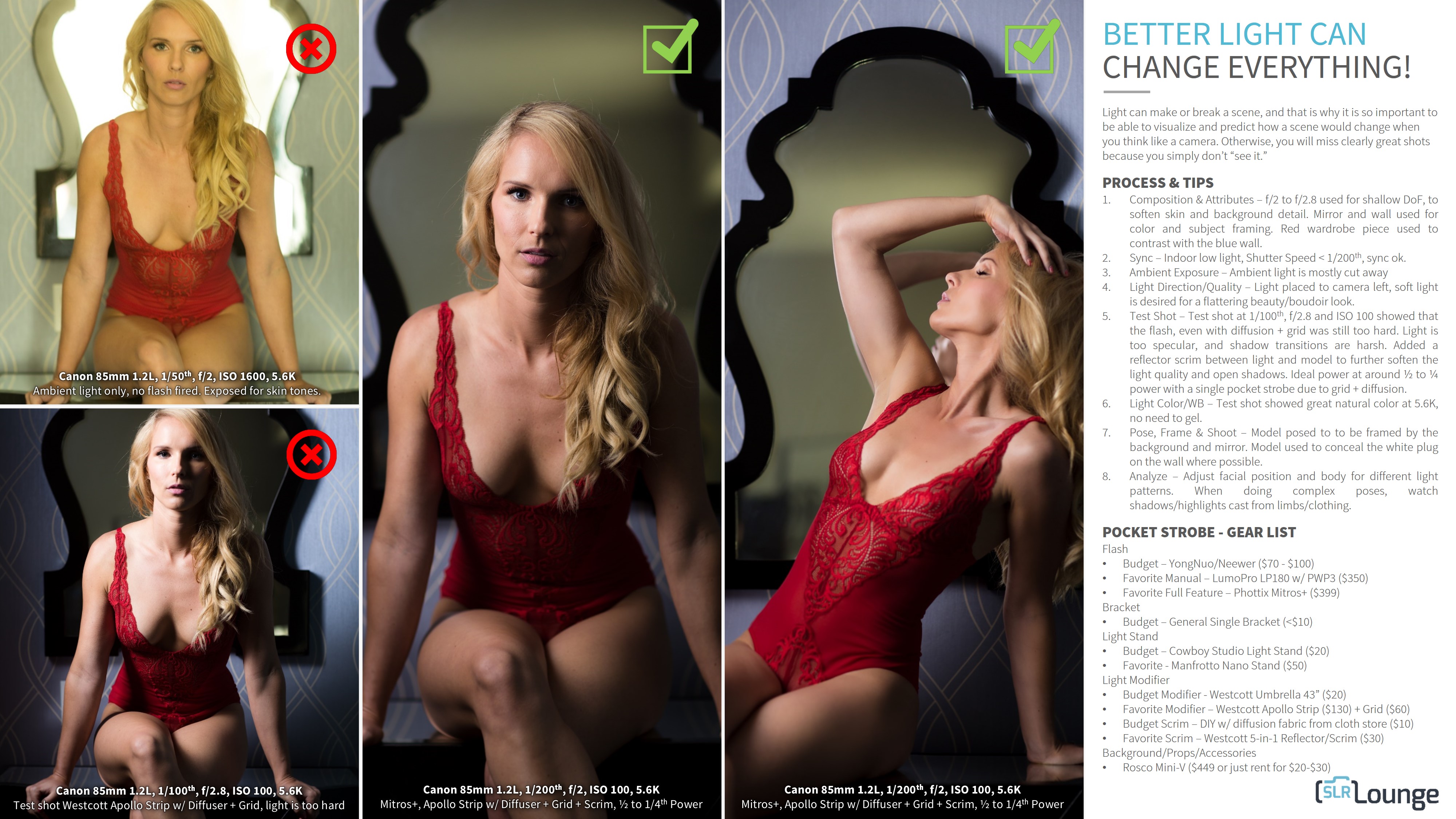 Lighting 201: Better Light Can Change Everything!

Better Light Can Change Everything! | Transcription

Better light can change, virtually, everything and so this is our last video in the whole visualization chapter of seeing like an artist, but thinking like your camera. Why do we have this video in here? Because, again, this is another scene that unless you’ve visualized what it could potentially look like, you would absolutely skip over it, because in reality this is what it looks like.

In reality, when I took my shot there, this is what the scene looks like based on ambient light, but I knew it was a great background. I knew that we had a beautiful wallpaper there. I knew that everything there looked great. It was just that the light wasn’t good. In visualizing, I thought, if I put a clean, blue, just my regular 5500 degree Kelvin flashlight over this area, it’s really going to go reveal all the color in the scene, the color that’s currently being muddied by that kind of yellow tungsten light that we’re seeing.

We visualize and I go, “Okay. I think there’s something here. Let’s go ahead and just take a couple of shots and see if indeed we do have something.” The whole compositional idea here is, I have her in this red outfit, and what I actually asked her to do was, I saw the background, and the background was this nice, blue wallpaper, and I told her, I was like, “You know what? This background is really cool. You mentioned that you have a red outfit. We haven’t shot you in that yet. Why don’t you go get changed into that, because I think it’d look really great over this background? It’d contrast really well, it kind of has a complimentary look to it. It’d look really nice.” She went and changed, and she came out. We took this one shot right here.

This is the 85mm, 1.2 L Canon lens. This is the Sigma version. Again, I’m dying. Sigma come out with the 85 Art already. Across the board I’ve replaced all of my primes with the Sigma Art primes, but they still don’t have an 85. The Sigma 85, the current 85, is a great lens, but it’s still doesn’t quite match my Canon 85mm 1.2L.

I’m using that guy. I have 1/50th of a second used for shutter speed F2, ISO 1600, we’re at 5600 degrees Kelvin just so you all can see this ambient light. There is no flash fired. This is just exposed for skin tones. Again, if we weren’t to visualize anything, we would just be like, “Oh, that’s poop. Let’s just move on from this.” By the way, when you’re shooting with, especially when you’re doing boudoir, bikini, and fitness, and that kind of stuff, where your subject is very vulnerable, even when something’s not working, say that it is. If I take this shot, I’m like, “Oh, that’s gorgeous. Beautiful. I love it.” I always throw out those kind of words on set because you want the person to always feel confident and happy and so forth. If something’s not working just say, “That’s beautiful. Let’s move on to another shot.” Don’t say, “That’s not working,” because they’re going to think it’s them and it’s going to really ruin the overall mood on set and it’s going to ruin their confidence.

I put a Phottix Mitros inside of the Westcott Apollo strip and I used the diffuser and the grid. I have it being held off camera left. Off camera left, we adjust our camera settings to 1/100th of a second, we’re at F2.8 and ISO 100. Why? Because we’re trying to kill that ambient like. Basically, I’m not worrying about sync, we’re indoors. I don’t have to worry about anything synchronization wise but what I’m trying to do with the ambient light exposure is cut it away. That nasty light that I’m see up here, I don’t want it. I don’t want any of it so we bring it down, what is that four stops? We went to 1600 so 800, 400, 200, 100. Four stops in ISO. We brought the aperture up one stop so we went from F2 to F2.8. That’s five stops total now. Then went from 1/50th of a second to 1/100th of a second. That’s six stops. We have reduced light in the scene by six stops, which, basically, means that whatever existing light was there is gone. It’s not longer there.

We flash at around, I think this was around half power or, no, I think this was maybe 1/4 power, because we have the diffuser on, we have the grid on and this is placed very close to her face right now. It’s just right about there. Just barely out of frame and it looks great but what I notice is that it’s very, very hard light still. It’s very dramatic. Immediately, I go, “You know what? The light source is still not doing it for me,” so I asked my assistant to open it up further.

How do you take a light source that’s already soft and open it up even more? I always say open it up because you’re taking a smaller source and you’re making it larger. Step number one in opening this guy up was to put it inside of that soft box, inside of the Westcott Apollo strip. Step number two, in opening t up even further was to put the diffuser over the front of the strip. It hits the back, it opens up a bit. It uses the diffuser, it opens up even further. Step number three is to use, well, you can use, basically, anything. You can use another Westcott 5-in-1 scrim so you can grab the scrim out of a 5-in-1 reflector, you can use that. You can use just basic diffusion cloth that you pick up from your local cloth market for 10 bucks. Whatever you got, you place another diffusion fabric in front of the light source. Now it goes off the Westcott Apollo strip. It’s going through the initial diffusion. And now it’s going through another diffuser which is held right between the flash and the model.

Look at the difference in quality. Remember that, whenever you go through added layers of diffusion, you’re cutting light. Every time you open up that light source further, you’re cutting light so now we’re probably around 1/2 to 1/4 power to get enough light onto her. It looks like we increased the shutter speed to 1/200th of a second. We opened up the aperture. Why do you think that was? We increased shutter speed, we opened up the aperture. Opening the aperture basically gave us one stop more flash, one stop more ambient light. Keeping the shutter speed up, or boosting it by one stop, to 1/200th of a second decreases that ambient exposure and leaves us with just brighter flash. So we decrease the ambient exposure while increasing the amount of flash that’s added with that little adjustment. That neutralizes the fact that we just put in another diffuser. Now we have that additional diffuser there and the quality of light is gorgeous.

Look at the blue tones that we see; the clean tones that we see. Look at the skin tones; the wonderful shadow and the way that it kind of reveals everything; her body, her form, her chest. Everything looks beautiful in this shot and it’s because of the shadows that are revealing her shape and her form. Compare that to this one. Massive difference in these two shots. Now that we have that set up, this was, essentially our test shot and I just took the test shot and, I kind of like it so I kept it.

Now that we have that set up, we actually move her into her pose. This was the final pose that we did for this shot and I want her to, again, look up, look away, close the eyes, bring the hand up. It’s all about form and figure so we’re creating that curvature in the spine. We’re letting the hip open up, right here, towards the bottom of the frame and, then, close up as it goes out of the frame. We’re leaving space between the arms and between the face to show that form. This is right out of camera, people. There’s no work done on this.

We could Photoshop and make everything, we could do whatever we want to it but she looks incredible. The scene looks amazing. Our light looks fantastic and everything has been improved, on something that we would have normally thought was just, garbage. Just a scene that was normally just garbage. We visualized and we thought, “You know what? With the right light, with better light, we can change everything.” That’s what we did from this shot over to this shot.

Last thing I want to mention. For this particular shot, we still had our Roscoe Mini-V and, for scenes like this, I often times like to just create a subtle amount of haze, just a very soft amount. We didn’t kick any extra fog into the room. This is basically after that Gobo shot that we were using to create those lines and so forth. We just had a nice bit of fog in the room, just a very subtle amount, and what that does is, with a little bit of smoke or fog particles in a room, those air particles create points to bounce light off of. So it opens up and creates an image that just a little bit less contrasty, with a little more fill in the shadows, has a very, very nice and organic look to the image so it doesn’t look so, I don’t know, high def, coming straight out of the camera. It doesn’t look so, perfect contrast and everything like that, it has a little bit more of an organic and natural look. Either way, it’s a very subtle amount. Whether you chose to add it on set or whether you chose to just create that lack of contrast in post you could do that too.

That is our final image. Last takeaway from this. Remember, whenever the light source, whenever something’s not soft enough, just simply open it up another step. It’s going to kill a little bit of light power, so when light power is not an issue you can always open up that light source again with additional diffusion. You can do it as many times as you want. When we do Hollywood, when we’re on Hollywood sets, and we’re filming for a commercial, sometimes we’ll open up a 5000 watt HMI light. We’ll open it up four or five times across multiple scrims, just to create a softer and softer and softer more natural look to the light source.