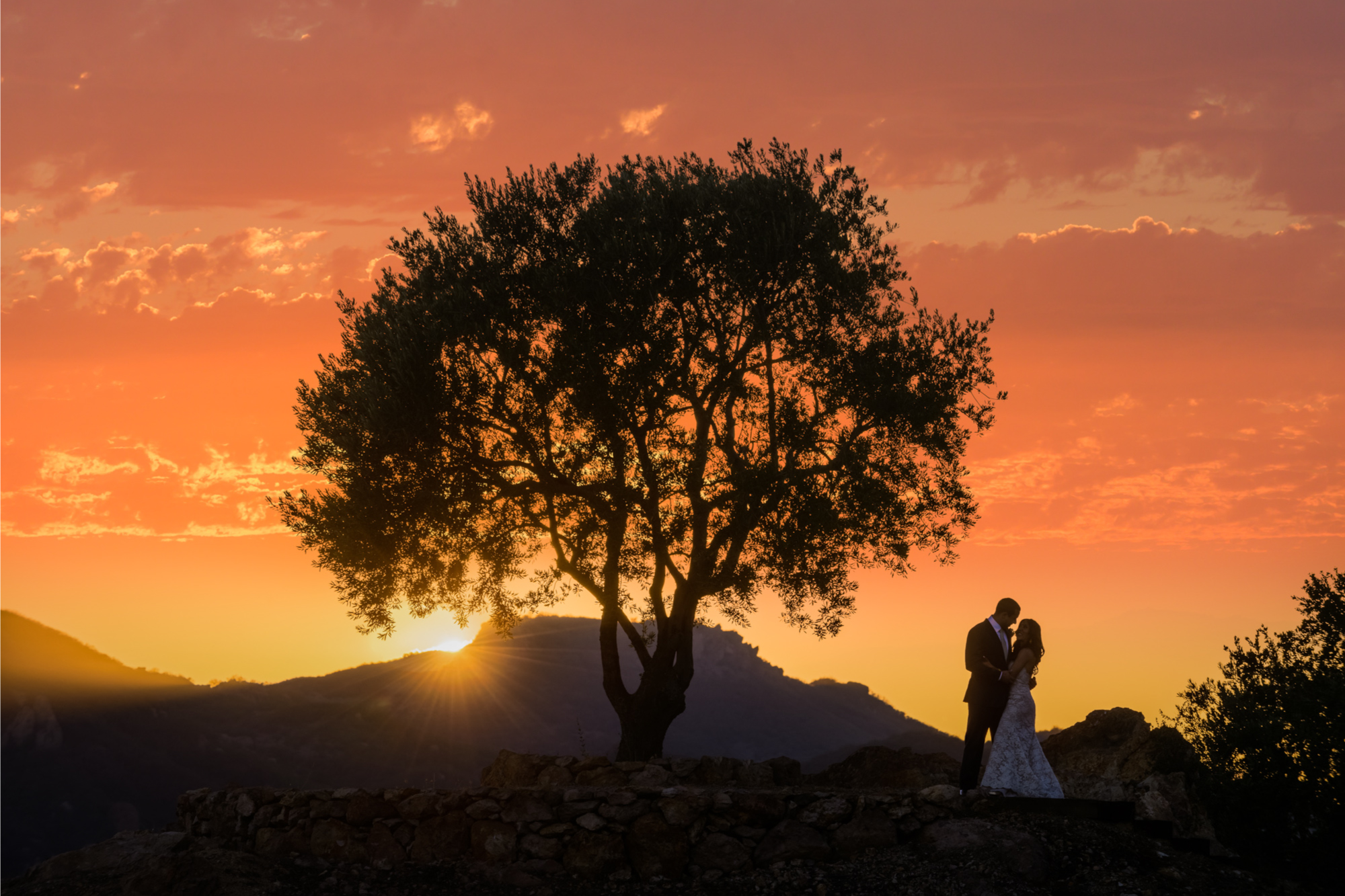 This next tutorial will show you how to use an advanced layer blending technique known as “Blend If”. This tutorial applies to the SLR Lounge Cloud Pack, a collection of hi-resolution cloud files.

In general, use “Blend If” to merge two layers that have extremely intricate edges between them. The sample image we’ve chosen to use gives us a very intricate challenge because you can see the sky through the tree. It would be completely impossible to accomplish this blend with selection tools alone!

Above is the before image and the image we’re going to create. As before, first perform the necessary image checks: the images are both relatively telephoto, tight compositions, and the light in both is very similar.

Note: While the SLR Lounge premium membership includes the exercise file(s) pertaining each particular tutorial in the Cloud Pack, it does NOT include full download to the Cloud Pack. This addon can be purchased in our store here.

In Lightroom, right click the two images and select “Open as Smart Objects in Photoshop”. We’re going to use this option instead of “Open as Layers in Photoshop” because we may need to perform additional editing on one or both of the images separately, and it is preferable to do any color correction in the Camera Raw environment. Even though the cloud image is already a JPG, Camera Raw is still a fantastic tool.

Note: If you simply copy and paste the cloud image onto the main image, it will no longer be a Smart Object. Instead, simply drag-and-drop the cloud layer itself onto the other. 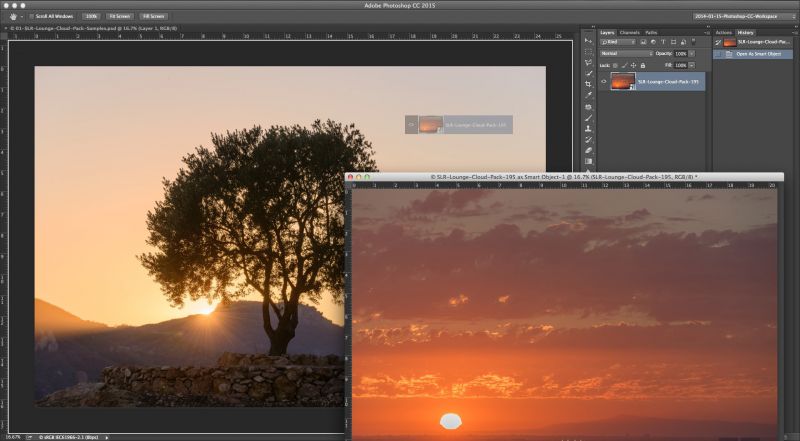 Lower the opacity of the top layer to somewhere between 40% and 60% so that you can see through the bottom layer, and hit CMD-T or CTRL-T to transform the cloud layer and adjust the image size and placement until it lines up and looks natural Don’t forget to bring the layer opacity back up to 100% when you’re done! 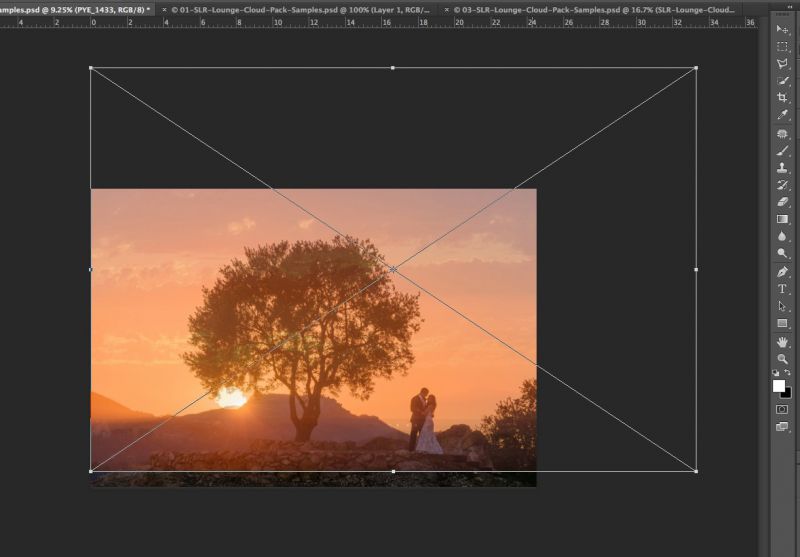 Right-click on the cloud layer and click Blending Options. You can also click the little FX icon at the bottom of the layers panel. 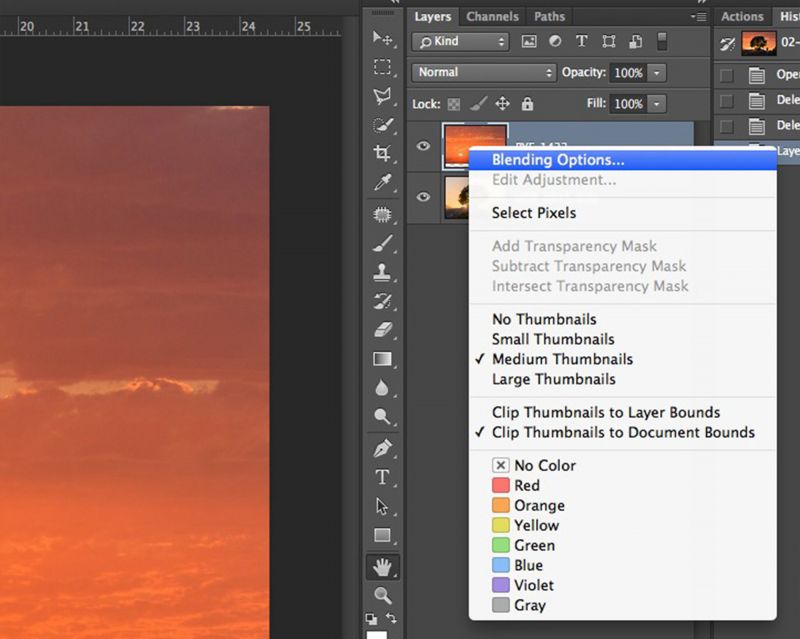 The objective of this blending method is to reveal the darker parts of the image on the bottom layer but not the light-toned sky. At the bottom of the Layer Style/Blending Options panel, look for the “Blend If” box. There are two sliders, one for “This Layer” and one for “Underlying Layer”. Click and drag the left-hand (blacks) tab for “Underlying Layer” to the right. You should see the darkest parts of the layer beneath begin to reveal themselves. 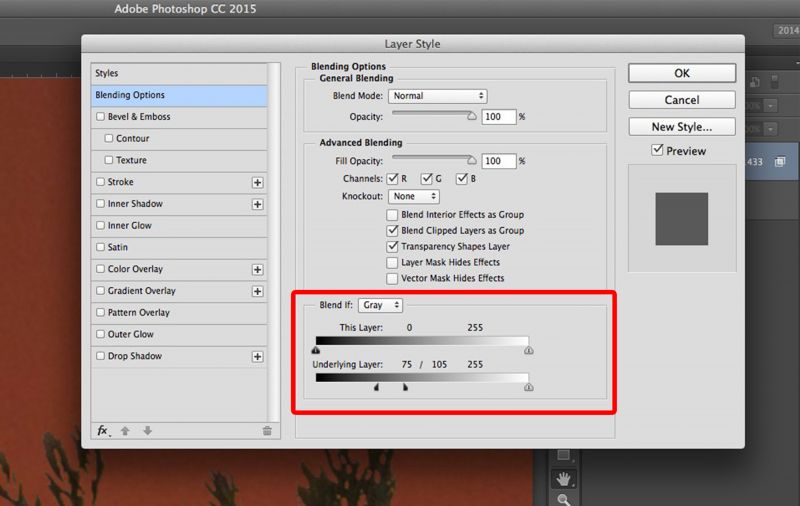 The edge between the tree and the background will probably appear very hard and sharp at first, so we need to create a softer edge. We can do this by using a feathering technique. To feather the transition between layers, hold down Alt/Option and drag the same black tab of the Underlying Layer slider as before. It will split in two, and create two different sliders that form a graduated transition. This will make the edges between the tree and cloud layer more natural looking, with a realistic foreground-background transition. However we still need to make sure that the transition looks natural everywhere. Zoom in closely to various parts of the tree, and fine-tune the two halves of the slider for the best overall effect. For now, don’t worry about the other edges around the sun and the subjects. 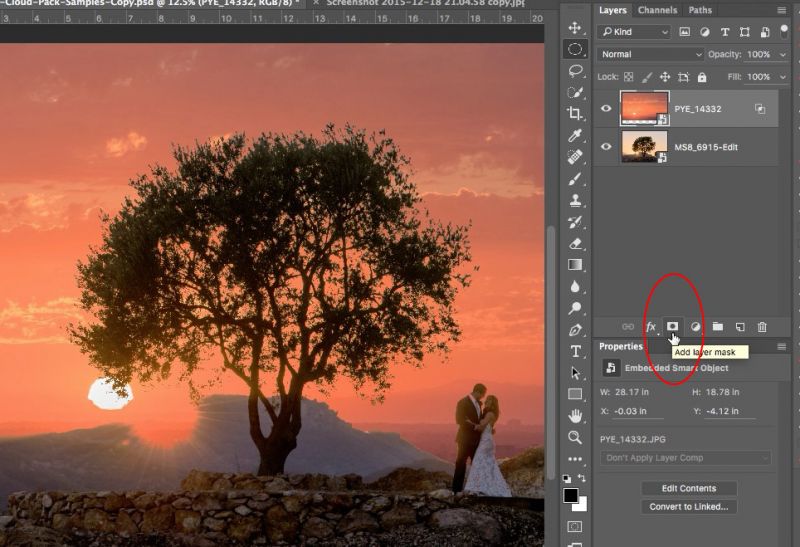 Hit “B” to select the brush tool, and brush on the mask (not the layer!) in the areas of the foreground you want to hide. In this case, gentle, broad brush strokes with a very low Opacity (15-25%) should do the trick.

However, it should become apparent that the cloud layer and the foreground layer have some issues because of the differences in brightness. Don’t try and use masking to fix this, we’ll adjust it next. 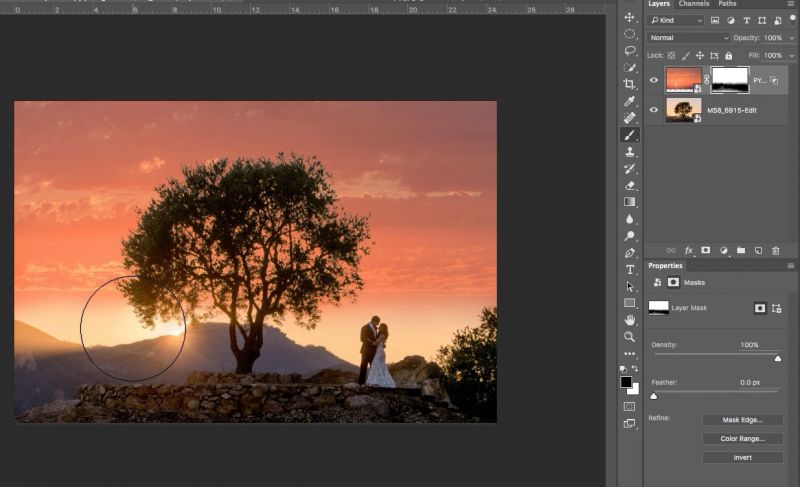 STEP 5 | USE CAMERA RAW TO EDIT A SMART OBJECT 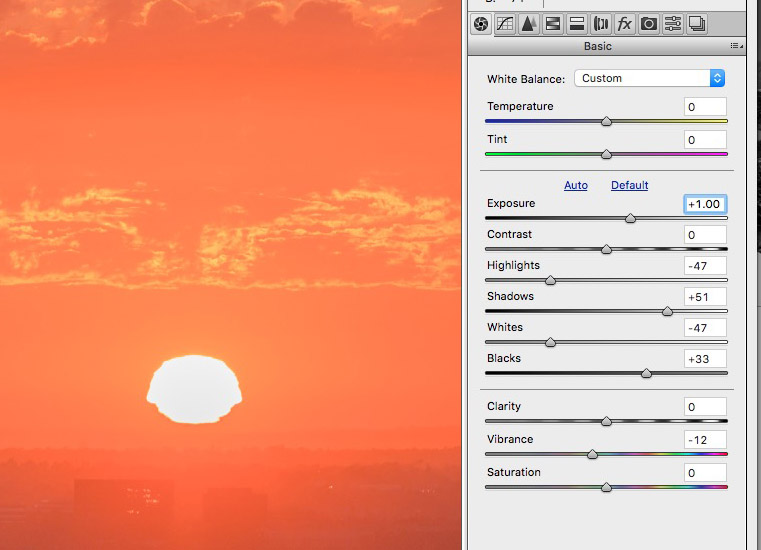 STEP 6 | USE PHOTOSHOP TO EDIT THE FOREGROUND LAYER

We edited the cloud layer using Camera Raw because we needed to perform multiple adjustments at once, which would have been a bit more complicated to do in Photoshop. However to bring the two separate layers even closer together so they appear natural and seamless, the foreground layer could also use a bit of darkening. This should be less complicated, though, so we’re going to use a simple Curves Adjustment Layer in Photoshop. At the bottom of the Layers panel, click on the little circle icon (a drop-down menu) and select “Curves”. 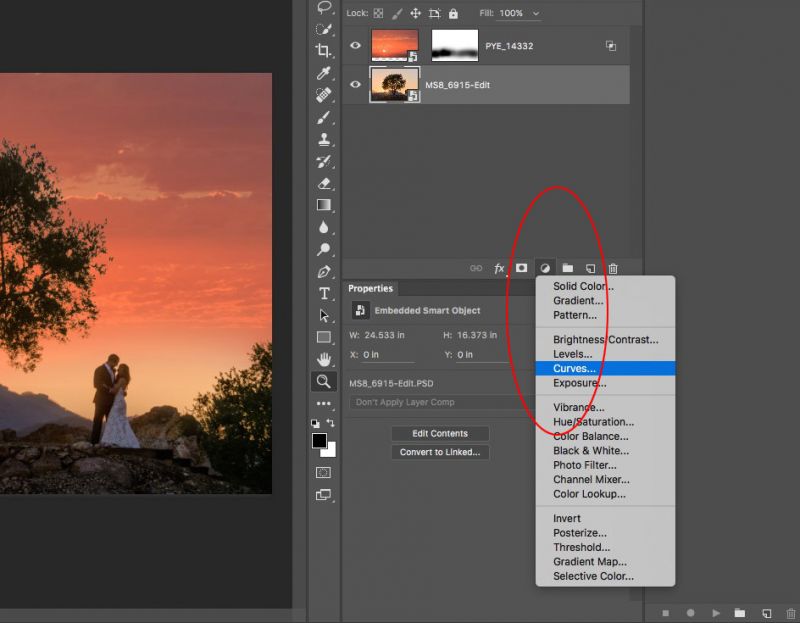 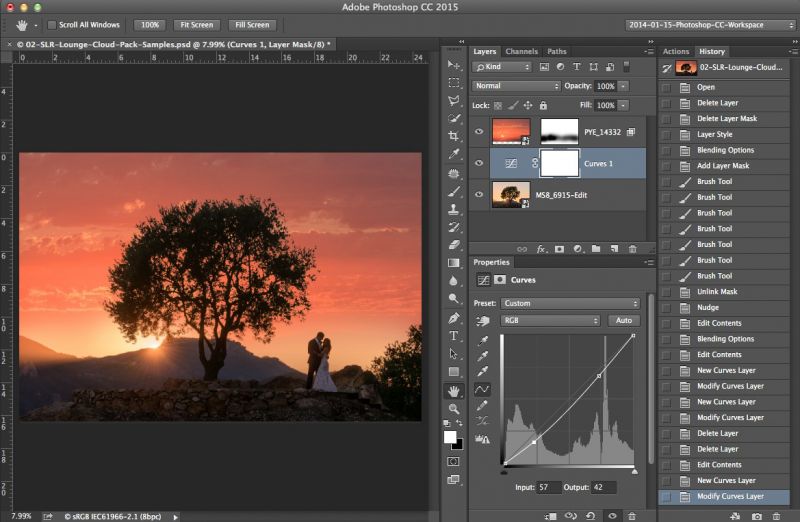 Make sure the Properties window is open, (Window > Properties) so that you can see and change your curves adjustment on-the-fly. If necessary, you can also fine-tune the adjustments made to the cloud layer by double-clicking on the layer again.

Even if the brightness of the layers can be matched, the colors may still not go well together. In this particular case it is very clear that the sunset is more orange-red, and the sky in the foreground is more yellow.

As before, adjust the cloud layer and the foreground layer separately by creating two separate Adjustment Layers.

(Skip over to the Layer Color Correction ‎for a detailed tutorial on Advanced Blending.) 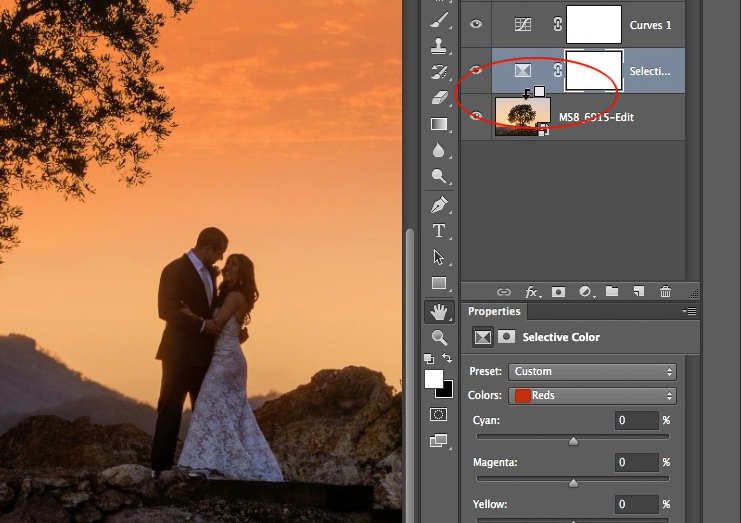 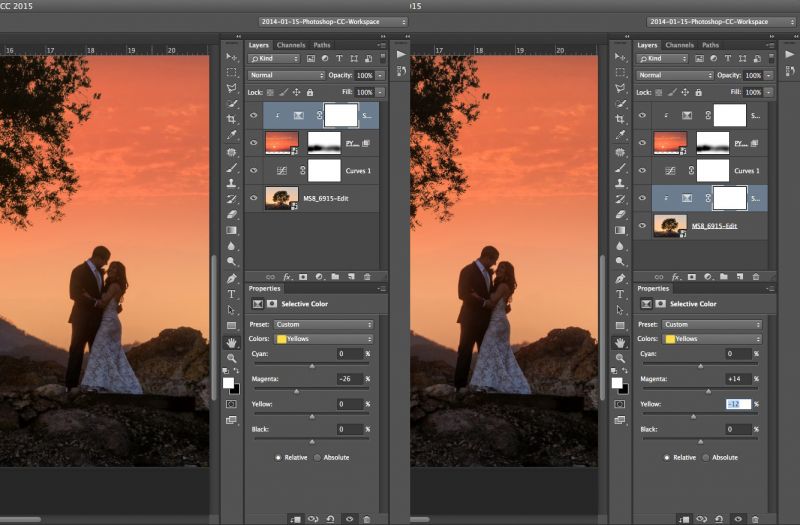 All in all, we now have a total of four adjustments applied to our layers, all of which can be fine-tuned as much as you want without hurting the image. Collectively, this should be more than enough flexibility to create a great image! Once you have the overall image the way you like it, click Save (CMD/CTRL-S) and bring the final PSD file back into Lightroom.

We recommend taking the PSD or TIF image back into Lightroom for any final minor adjustments to overall contrast or color especially if your overall workflow begins and ends in Lightroom.

Sometimes it helps to give the entire image a very faint hue, tint, or contrast adjustment, to both the clouds and the subjects, so that it appears just a little bit more natural and cohesive. You may also choose to take the image in a stylized direction. 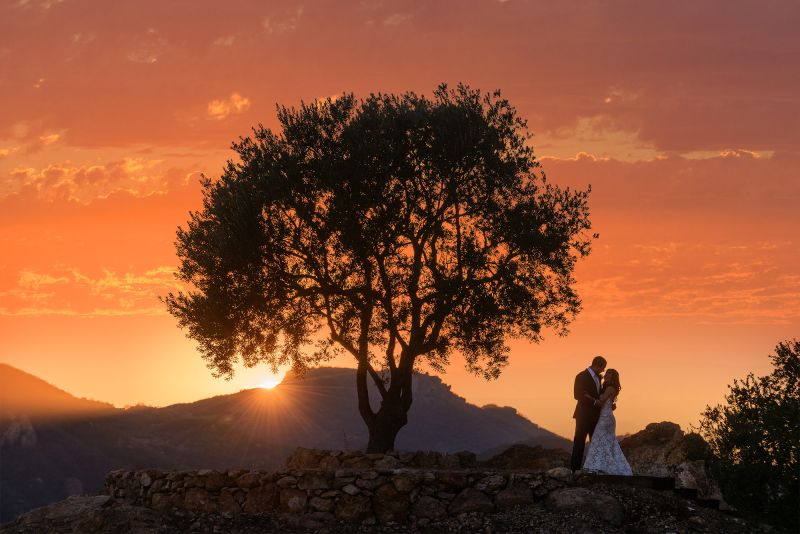