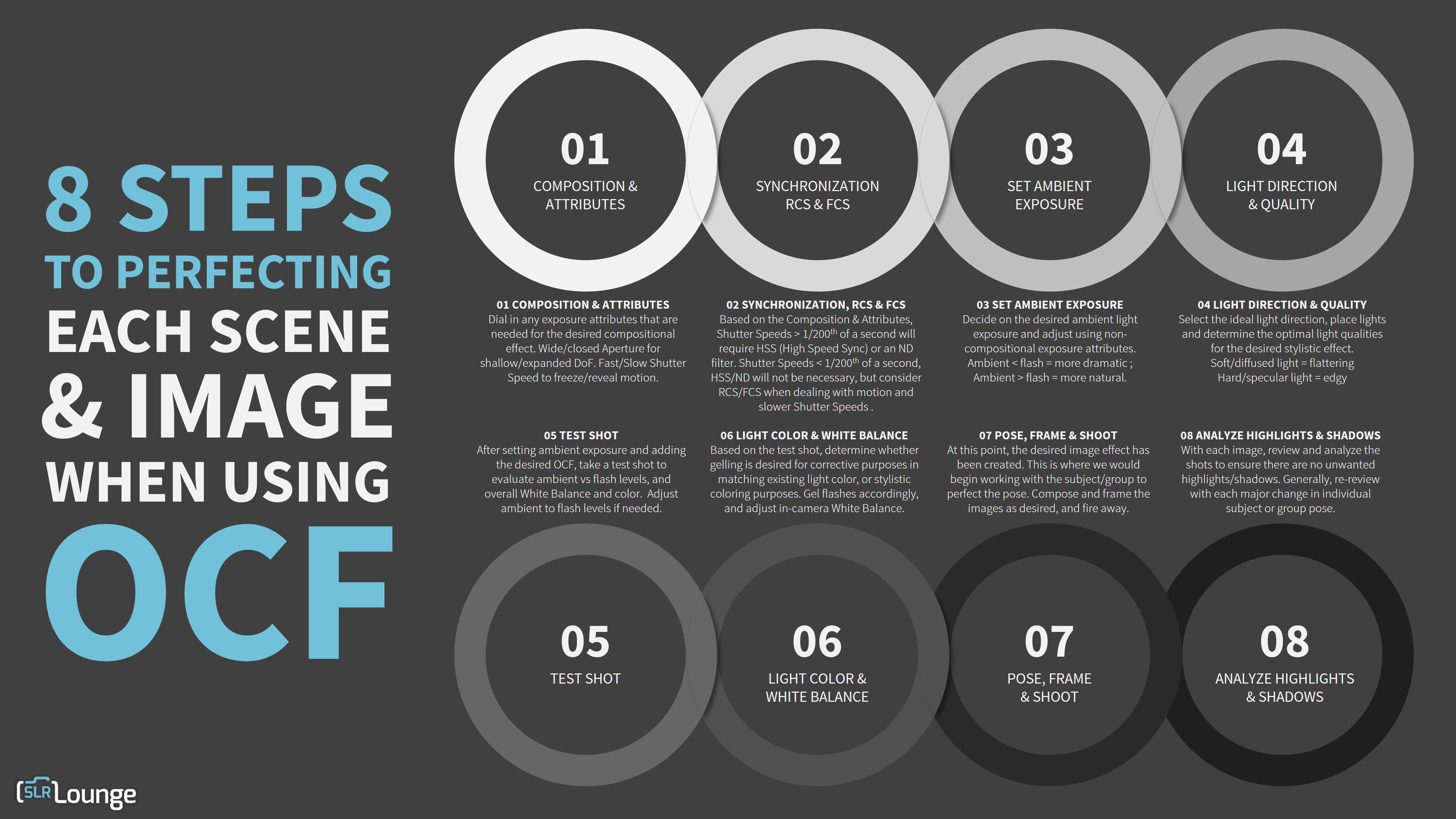 Lighting 201: 8 Steps to Perfecting Each Scene & Image When Using OCF

8 Steps to Perfecting Each Scene & Image When Using OCF | Transcription

All right, let’s start from top with number which is composition and attributes. What we’re saying here essentially is that when you approach any scene, the first thing that I want you to do is dial in the camera settings that relate to your composition or the composition that you desire. For example if I approach a scene and I want to shoot this beautiful wild landscape then I probably want a deep depth of field. To do that I would close down my aperture or If I’m shooting portraits and I want to really create a lot of background separation I might open up the aperture for a very shallow depth of field. Let’s say I’m capturing cars as they’re driving by and I want to freeze all that motion as these sports cars race by on a track, well I’m going to speed up the shutter speed. If I want to capture and show that motion then I’m going to slow down the shutter speed.

Number two is synchronization, rear curtain sync and first curtain sync. Again going back to Lighting 101 we talked about all these things in complete detail so I’m not going into the complete detail here but let me give you a little summary. If our shutter speed is going above one two hundredth of a second that means that we either need to do one of two things. One we need to turn on high speed sync on our flashes if that’s available, if we’re using full feature flashes. If we’re not using full feature flashes we need to be using neutral density filters to cut down the amount of light in the scene so that you can lower the shutter speed below one two hundredth of a second so that your flashes can actually synchronize with that shutter speed.

There’re merit to using neutral density filters even with full feature flashes and the primary merit there is that when a full feature flash goes into high speed sync you have a tremendous amount of light loss. Anywhere between four to seven stops of light loss. To maintain power you can use a neutral density filter and then cut down so that you can get to a sync speed that’s below one two hundredth of a second and not use high speed sync on the flashes. Again, for more detail on that go back to lighting 101. We compared all the merits on that side.

The next option that we have is rear curtain sync versus first curtain sync. Now, if our shutter speeds are relatively high, if we’re working at one one hundredth of a second, one two hundredth of a second around that area it really does not matter that much unless your subject is moving very quickly. When we start dragging out shadow, when we start slowing it down to say one tenth of a second, one thirtieth of a second … I don’t know why I started from the slow then I went faster. One thirtieth, one tenth, one fifth, one second at that point we need to decide do we want the flashes to fire at the beginning when the shutter opens or at the end when the shutter closes. For that we would choose first curtain or rear curtain sync.

That’s the thought process. Step number one we dial in our compositional attributes and then we look, if we’re shooting at F2 then … Let’s say that we’re shooting at F2 and it’s bright outside we’re at one two thousandth of a second well as soon as I reach step two I go “Crap, synchronization. I cannot synchronize at one two thousandth of a second I have manual flashes. Okay, I need to get my ND filter out.” You get your ND filter and now you’ve resolved step number two or if you’re doing a shutter drag you figure out “Okay, maybe I need to do rear curtain sync here so my flash fires at the very end of the frame.” You flip that. That’s step number two, it’s kind of getting the tech to work the way that you want it to.

Step number four, at this point we would decide what is the ideal light direction and quality that we want for this subject in this particular scene. For example most photographers if you said “What’s the best light quality possible?” They would say “Oh, I love my beautiful gigantic parabolic that’s like a 8 feet big and it’s creates this beautiful soft light and it’s so amazing.” Listen, there’s no such thing as the right or the perfect light. There’s only the right kind of light for the subject that you’re shooting and for the vision that you have.

If I’m shooting fitness photos then the right kind of light for me is a harder and more specular light that’s really going to cut out the definition in the body. If I’m shooting engagement portraits the right type of light for me in those situations is a softer light and a light that’s more simple and easy just to look at because we want it to be about the subject, we want it to look beautiful and lightened area and so forth. Same thing if I’m doing wedding portraits. If you’re doing food photos or product photos the right light is going to vary every single time based on the subject and the vision that you have for that subject. At this point, step number four we’ve taken care of all the tech, we figured out what we do we want that ambient to flash balance to be and this is where we where do we want the light come from? What quality do we want that light to be? Do we want it to be soft or hard? Do we want it to be diffused or specular? And so forth.

Step number five is the test shot. Of course throughout this entire process generally we’re taking shots just to see where do you want the ambient exposure versus everything, where do we want … Where is the initial … I always take a shot when I approach a scene, I just go “What do I want my compositional attributes to be here? Do I a blurred? Do I want [inaudible 00:07:23] field? Do I want those things?” I’m taking test shots throughout but this is the test shot at number five where our light is set up, our subject or our test subject is in place.

How is the light color in the white balance. I remember one from Lighting 101 basically where we’re shooting a model Jill on the beach and I take my first shot and I’m like “You know what, I know for a matter of fact that I want to put a yellow light on Jill because I want to cool down the background.” I want to basically put a color temperature orange, a CTO gel on my flash, and I’m going to fire into the reflector light her up so that she’s orange.

We’re going to tone down the white balance in the camera so that it corrects for the light that I’m putting under her skin and then it sends the background into this deep blue and the ocean looks amazing an it matches her bikini. It looks absolutely fantastic. The reason why is because the shot that I took prior to that where all the colors are warm I just didn’t really like it. As soon as I took that test shot I said “Hmm, everything is great except you know what? I really want a stylistic change in white balance.” That’s where we do that with step number six.

Step number seven, we’re into the shoot process. We’re posing. We’re framing, we’re shooting. My advice to you is once you have the light set up, once you have the shadows and the highlights and everything is falling the way that you want it start moving around, take you shots, move to different angles, switch out your lenses. Try different things because most of the time … This is what I find on almost every one of my shoots, most of the times I set up my first shot and it’s what I would call basically my safety shot. It’s the shot that I know is going to work. It’s my must have.

Right after that shot is set up I start moving around the scene leaving the light and the model in the same exact position, I’m moving around the scene I’m adjusting the model’s pose and angle based on where I’m moving to and I’m shooting different angles. Perfect example of this is the shot that we took again in lighting 101 where we have our subject Jeremiah who is holding on to these rods. We take this shot where he’s holding onto this rig straight on and it looks great. That’s my safety shot and I love it. It’s a fantastic shot. Right after that shot was set up with our V-Flats and everything in place all I did was move my position just a little bit and I shot through the rills and we got my favor shot from that shoot. Where it looks very candid and it’s very natural type of images of him holding onto that rod of the rig and you can see all his muscle definition and so forth. My point here is once you have the light set up don’t just shoot one shot. Move, pose, frame.

Then last step is analyze your highlights and shadows. The big deal here when you’re analyzing you want to zoom in and look closely at where the highlights and shadows are falling because an image might look perfectly fine in the back of your screen and then you put on your computer and you’re like “Oh, my Gosh there’s giant shadow cast right over the person’s face because her fiancee blocked that light and there was a shadow over half the girl’s face.” That’s a problem and it’s actually difficult to see in camera so you need to pose, if you’re not tethering like you’re not in a studio and it’s not convenient to tether pause after every major light set up, zoom in, look at the highlights and the shadows on the image and then continue shooting with every major change in camera to subject position.

By the way when you get into this stuff, when you get into the groove it doesn’t necessarily have to go in this order. You can break things and put them in whatever order you want but when you’re learning it really helps to have a process like this to go through. Every single time it’s a challenge and every single time it’s one that … We’re confident that we can resolve because we’ve been in this situation so many times. With these steps and with a little bit of practice you’re going to find the exact same thing.

Over Powering the Sun – Part I