SLR Lounge > Inspiration > Does Working For Free Ever Pay Off? 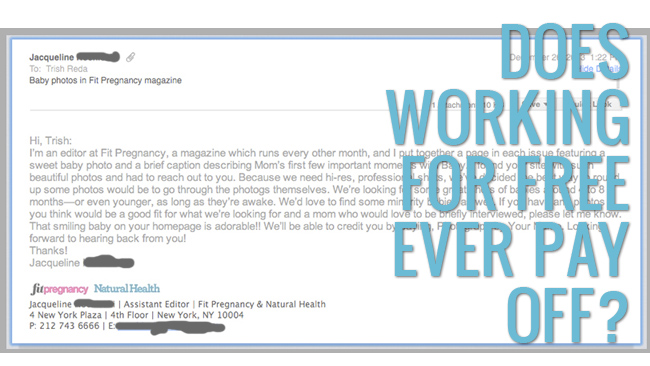 How much is a photograph worth? This question has many different answers, and lots of photographers might argue that an image is timeless. It is a tangible piece of a moment frozen forever in time. A photograph is a reflection of what the mind’s eye sees at the moment a shutter clicks. So, how much is a photo, a memory, worth?

According to Fit Pregnancy, a photograph is not worth much. Maybe it’s worth a credit line and the resulting “exposure”, but unfortunately not monetary compensation as photographer Trish Reda found out in the following email:

Of course at first, every photographer would be flattered to be noticed and complimented by a magazine from a fairly large corporation. (Fit Pregnancy is owned by American Media, Inc, which owns a dozen well known magazines)  Even the thought of being published by such a magazine might seem like an incredible opportunity!

To this message, Trish replied: 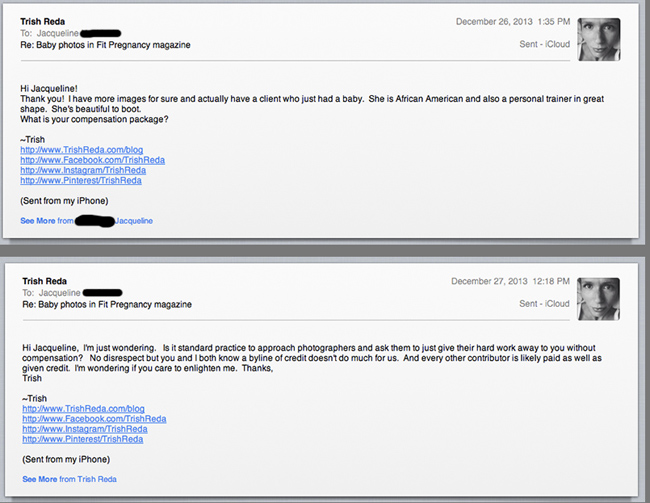 Trish posted this on her blog, with a long (and self-admittedly) snarky rant with her thoughts on the matter in a letter directed to the assistant editor of Fit Pregnancy Magazine. “You made me an offer of zero dollars for my work.  For my art.   You and your company attempted to use your power and fancy name to take advantage of me.  Do you  know what this officially makes you?  It makes you a step below WalMart.  WalMart at least offers minimum wage or poverty wages overseas.”

As well as an open letter to the “other ‘photog’ whom the magazine editor contacted and is excited about her offer.” In it she encourages photographers to not fall for the flattery and give their art away for free, especially not to major corporations who do pay their other contributors. “When a company  like this comes at you with flattery and then asks for you to hand over your beautiful art for free, resist the urge.  It’s tempting, but resist.  For one thing, you are totally worth more.  You truly are.  But you know what?  So am I and so is the next up and coming photographer.  They will never buy our cows, if we keep giving away our awesome,  organic, raw grass-fed milk for free.”

You can read the letters in their entirety on Trish’s blog.

Should Photographers Work For Exposure Only?

Sometimes, working for exposure is not necessarily a bad thing. Before you start throwing tomatoes in my direction, hear me out. No, exposure itself doesn’t pay the bills. But there are many cases where exposure is actually well worth it.

[REWIND: Path to Pro with AJ | Work for ‘Free’ and Still Get Paid.]

In Trish’s case, she is an established photographer who probably would not benefit very much from being exposed to viewers who simply aren’t able to ever become her clients.

A company that does indeed have a budget for photography and is already paying a team of photographers for certain images, should probably be expected to pay for the use of Trish’s photos. A byline with credit is simply not beneficial, as Trish points out, and will garner little or no business or exposure for her.

American Media, Inc may have filed for bankruptcy a few years ago, however, I highly doubt that was because they paid a few bucks to credit un-contracted photographers for certain articles here and there.  Either way, I’m sure they’d be able to find some money to pay Trish for her photo out of their multi-million dollar revenue stream.

Really, the problem is not corporate budgeting. It is the simple fact that indeed so many other photographers are jumping at the chance to have their work published for free.

It might have been a different story, if Trish had been looking to promote a personal, charitable project that NEEDED exposure.   Free visibility might be exactly what you want, it just depends on your situation.

The Phenomenon Of “Going Viral”

We can also view the situation from the opposite direction.  If you are a photographer and you do, in fact, want to expose your work to a few million people, what would that cost you?  20 years ago, exposing your work to 1-2 million viewers might have cost, well, an absolute fortune!  To run a print ad in a prestigious nationwide magazine for just a few months or one year could cost tens of thousands of dollars.  (Legend has it that wedding photographer, Mike Colon spent $100,000 on advertising in order to grow his brand!)

Today, however, exposure to a million or more viewers can cost you $0.00 if you want.  And if your artwork is creative and unique enough to “go viral”, it might turn out to be one of the pivotal events of your life as an artist!

For example, timelapse photographer Sean Goebel created the video “Mauna Kea Heavens” which went viral via SLR Lounge.  This exposure generated interest from major companies including Canon, The Discovery Channel, and IMAX.  (Which were in fact interested in contracting (and paying) him to generate additional stock timelapse content for them.)

We’d be willing to bet that TimeScapes creator Tom Lowe has numerous similar tales of how free exposure was highly lucrative!

Of course, Sean Goebel reports that he also regularly receives letters from major publications “demanding” that he allow them to use his work without any pay whatsoever, and even to hand over copyright entirely in some cases!  Naturally, these inquiries are responded to with a politely worded “No way!”  ;-)

Simply put, the “going viral” effect was not even possible just 10-20 years ago, yet now it can be highly beneficial to someone who is playing their cards right.

So, make the decision for yourself.  Do you need the exposure?  What could you actually gain by it?  It’s that simple.  Here at SLR Lounge, we strongly encourage photographers to value themselves and their work. Don’t just agree to something because a publication tells you “Oh, everybody else we contact doesn’t have a problem with it!”

We at SLR Lounge do, in fact, respectfully request permission before featuring any photographers’ work, and we focus primarily on projects and bodies of work that we think would, in fact, benefit from exposure.  We, too, work full-time as photographers, and we certainly value that livelihood!

The most important thing you can do is spread the word and educate your fellow “creatives”.  Stand up for yourselves whenever necessary, and play your cards tactfully if you are an aspiring artist!