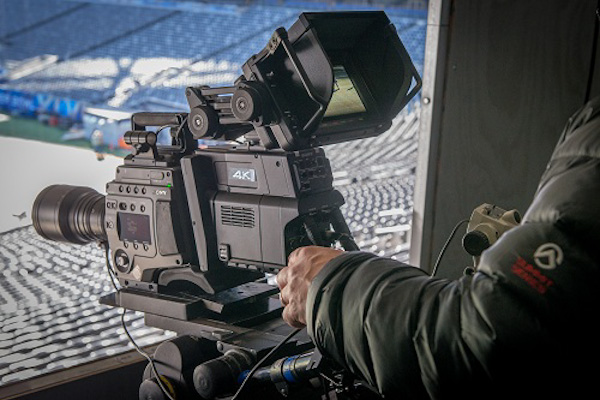 Will 4K at Super Bowl XLVIII Be a Game Changer?

I like walking around the mall. I’m a people watcher, and in Miami, the people watching may as well be a professional sport. As with attending a professional sporting match, there’s often a lot of eye candy, and if photographically inclined, that doesn’t just mean overly enthusiastic twenty-something college girls livening up the stands (or depending on your persuasion, buff guys on the field), it means tech. Any pro sports match from the clay courts at Roland Garros to Heinz Field when the Steelers are home, hosts a dizzying array of photographic gear; Likely there’s a sea of Canon grey lenses and the odd Nikon. At the mall though, it’s Sony. No matter what part of the mall you’re in, you’ll inexplicably be drawn to this beacon like a moth to the…4K televisions. And at this time of year, as in today, they’ll all be showing football. 4K is the dominant buzz word in tech around this year’s Super Bowl.

[REWIND: Behind the Scenes of the 2014 Super Bowl Commericals]

While 4K has made a rather grand entrance, it’s still in its infancy in many ways. For instance, this year’s Super Bowl will be filmed by a host of 4K cameras on the field. In a word with Mashable, Fox’s senior VP of Operations said that they will have six 4K cameras at the Stadium and all of them Sony. So, with MetLife Stadium dotted with 4K video cameras, you’d figure that with your spanking new 4K TV, you’ll be counting the blades of grass on the field in all their ‘Ultra HD’ glory. Except you won’t – not even in live stream will you even get better than 720p. Sure, your 4K television can bump up the quality, but it won’t be entirely 4K.

We have five Sony F55s and one Sony F65, all connected to the Super Zoom workflow. – Jerry Steinberg.

So What’s the Point?

Primarily, the focus at the moment seems to be funneled towards the ‘Super Zoom’ capability. Essentially, the resolution is so high, that they can crop the video and still maintain 720p in the crop. This is something similar to what some photographers I know are doing with the Nikon D800. So, the idea seems to be to rid the cameras of the need for more optical zoom, and whenever there’s a review to be made, or it’s desired to pull the image in tight, the ability will be there simply via cropping.

There are clear advantages for this high resolution aside from pleasurable viewing; case in point would be as Steinberg mentioned, the ‘Super Zoom’ was critical in the deciding moment of the Packers vs. Cowboys game last December. There was some deliberation near the end over an intercepted catch which ‘Super Zoom’ made clear to the refs, was legitimate giving the V to Green Bay.

Steinberg also mentioned he would like to see 8K. Sure, we all would and it will come, as will the cure for Ebola, in some time. Just not anytime soon. Though FOX’s adoption of 4K and 2K before it was quick, and other networks soon followed, for the end consumer it still poses its problems. If you’ve ever had to stream something in the past year and had your stream stutter and buffer, you’ll see that streaming something with twice and four times the data, will cause major problems right now. The standards aren’t there and the systems aren’t in place to handle it. Still, the game will be on, and with any luck you’ll be too engrossed in it, or the company, to give a stuff about 4K. Check out this video for a good break down on Sony 4K and 4K in general. Also here’s Mashable’s great ‘right-to-the-point’ video about what 4K is and means for you.

Cycloramic: Another Winner from the "Shark Tank"