SLR Lounge > Inspiration > Tips & Tricks > When Is Your Camera Meter Wrong? (And What To Do About It) 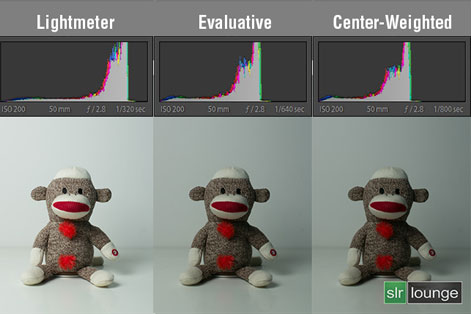 When Is Your Camera Meter Wrong? (And What To Do About It)

It’s true. The metering in the modern DSLR is highly advanced. Just take a look at the specs from the highly-regarded Canon 5D mkIII, which features an “iFCL Metering with 63 zone dual-layer metering sensor that utilizes AF and color information for optimizing exposure and image quality.” Sounds great right? Well, we wanted to test out just how accurate a modern DSLR metering system can be compared to a lightmeter like the Sekonic L-358 Lightmeter.

Before we get to the test, though, let’s take a look at how camera metering works.

Behind the 18% Gray or Middle Gray

Practically all DSLRs have some sort of complex algorithm that determines what is considered a “proper exposure.” To photographers, the term “proper exposure” can be very subjective, of course. Some of us tend to like our photos to be on the lighter side, while others prefer their photos to be darker. When it comes to a camera, though, its goal is to get the exposure to be at “18% gray.” This means that the scene is reflecting 18% of the light into the camera sensor.

Some photographers like Thom Hogan, however, say that 12% gray is a more accurate exposure for digital sensors. It is what the ANSI (American National Standards Institute) prescribe as the truer middle gray. Lightmeters like the Sekonic L-358 Lightmeter are calibrated to this standard, and since I do use my lightmeter when I can, I tend to fall into this camp. The 12% gray exposure is 1/2 stop lighter than 18% gray, so if you are using an 18% gray card to meter your exposure, you just open up the exposure by 1/2 stop as well. Otherwise, you can always buy a 12% gray card.

For a more technical explanation on 12% gray, you can read Richard L Hess’s article.

Canon also has a Partial metering mode that meters an area that is less than Center-Weighted but is more than Spot metering. We will also be testing the Partial metering along with the other 3 standard modes.

All cameras from the simple point-and-shoots to DSLRs and medium format cameras use reflected metering. This means that the metering sensor inside the camera reads whatever light is being reflected from the subject and the scene into the camera. 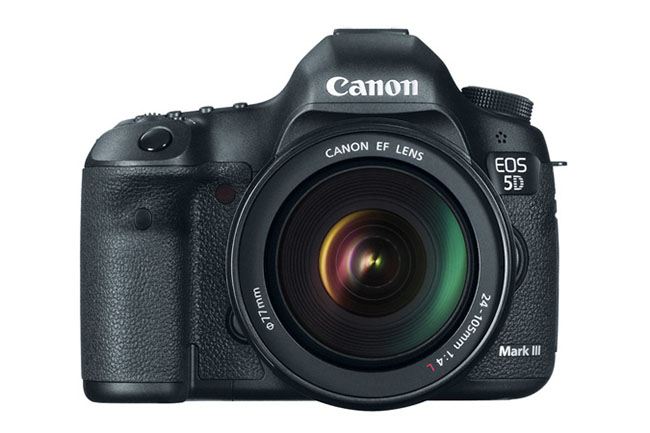 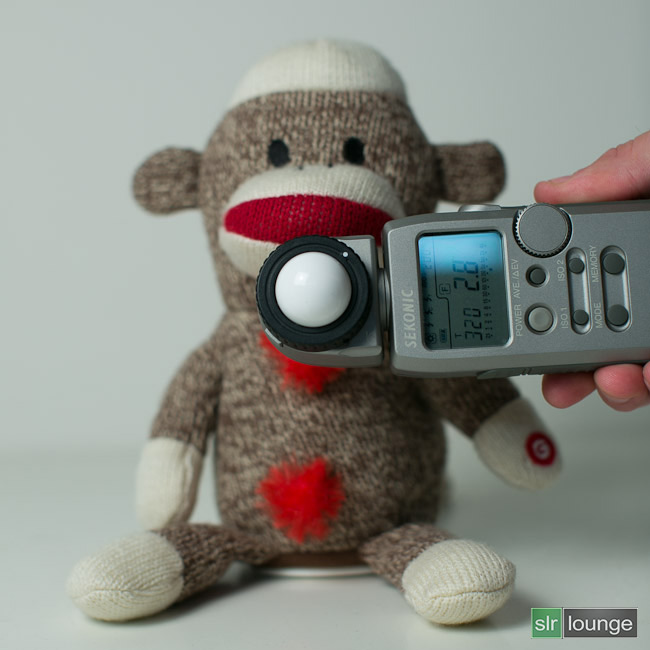 Your Camera Meter Can Be Fooled

The main problem with your camera’s metering system is that it always wants to find middle gray. So if you have a scene that has a lot of white, like a bride’s dress or a snowy landscape, your camera wants to make it all gray. Therefore, your camera will underexpose the scene until the dress or the snow appears gray.

Conversely, when there is a lot of black, the camera meter wants to change that black to gray, so it would overexpose the scene until the black color looks gray.

For our metering test, we are using the following equipment: 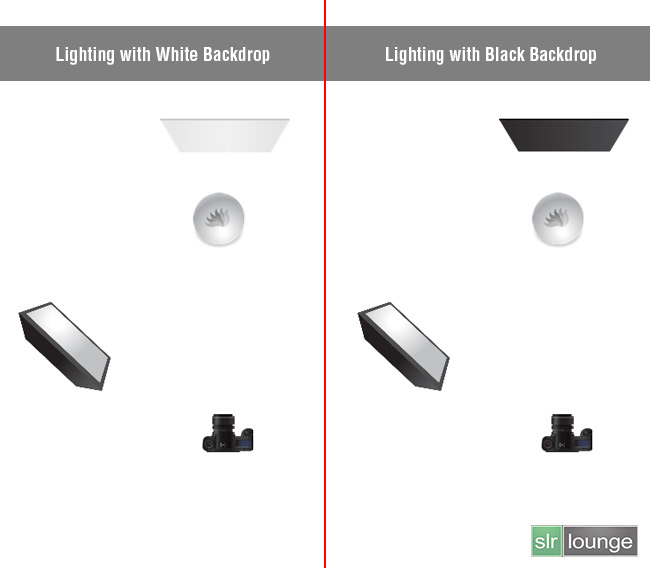 We shot three different subjects with both the white background and the dark background: 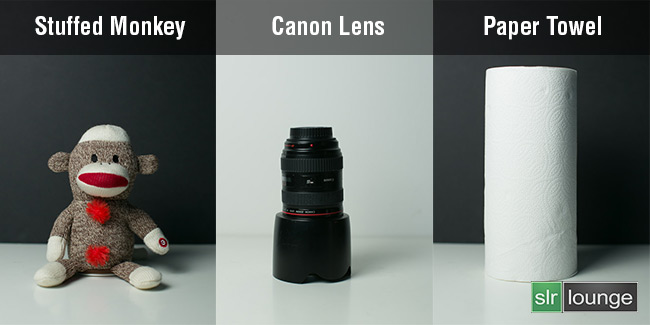 There are four variables that stayed consistent throughout the entire test:

For each subject-background variation, I metered with the lightmeter and the four Canon 5D metering modes, Evaluative, Center-Weighted, Partial, and Spot. For each camera mode, I adjusted the shutter speed until the camera’s exposure meter settled at 0 EV. I tested each mode 3 times just to make sure that the reading was consistent. Each subject was placed in or near the center of the shooting frame in order for it to be picked up by all the metering modes correctly.

I exposed the lightmeter every time I cycled through each subject-background variation to ensure that I am still getting the same reading as before, and as expected, the Sekonic’s measurements remained consistent at f/2.8, 1/320 sec, and ISO200.

The Evaluative metering picked up a lot of the white background and proceeded to turn it gray, thus lowering the correct exposure by -1 full stop. Surprisingly, the Center-Weighted metering lowered the exposure by another -1/3 stop even though it should be more biased to the monkey’s exposure. The Partial and Spot metering were not any better than Evaluative despite both of them reading mostly off the monkey and not the background.

The black background did a better job in balancing out with the monkey, with Partial metering registering the correct exposure and the other 3 modes being off by only +/- 2/3 of a stop. The Spot meter once again underexposed the monkey even though it was measuring the area between the monkey’s eyes.

Although the lens was black, the 5D mkIII was reading more of the whites from the background and the floor when it was in Evaluative and Center-Weighted mode. Partial metering measured just enough of the white background to balance out the black lens and was only off by +1/3 stop. When I used Spot metering however, the camera only metered the lens, and as a result, it overexposed the scene by +1 2/3 EV.

Just like the black lens on black background, the white paper towel on white background really confused the metering system. All of the white was turned to gray across the board. If this was a ski resort or a bride’s dress, you may be in trouble unless you compensate the exposure by +2 stops.

The white and black balance in this set helped the camera obtain a more correct exposure, with Evaluative and Center-Weighted being off by -2/3 and -1/3 stops, respectively. The Partial and Spot mode were only metering off the white paper towel, which is why it underexposed the paper towel more significantly than the other two modes.

So How Do You Get a Better Exposure?

If you can carry an 18% or 12% gray card with you, you can use it to get a more accurate exposure in difficult scenarios similar to the tests. The way you meter using a gray card is to take a photo of just the card under the main light and see where the spike of the histogram is located. Then, you would adjust your exposure settings so that if you take another photo of the card, the histogram spike will be in the middle.

You want to make sure to zoom in with your lens or move in with your camera so that you fill the entire gray card in your frame when you shoot it. This way, the exposure reading is coming from just the gray card.

If you don’t have a gray card, you can use the palm of your hands as a makeshift gray card. Now, of course, we all have different skin tones, so be sure to test how far off your skin tone’s exposure is from a correct exposure.

You can also manually compensate your exposure reading when you have a lot of white or black in your scene. Every camera model is going to be off by different degrees, so it’s best to test your camera out beforehand. So for the Canon 5D MkIII that I used, I would increase the EV by +2 stops whenever I am shooting a scene with a lot of whites.

Why Chimping is Not Always Accurate

Chimping is the colloquial photographic term where you use your camera’s LCD to review the image that you just captured. While this is one way to check for your exposure, it is also not the most accurate. Believe it or not, when you are looking at an image on the back of the camera, you are not actually seeing the true RAW representation. Instead, you are seeing a Jpeg image preview that has been processed with your chosen picture profile, color space, contrast, and brightness preference. That’s why a lot of times when you import the images into Lightroom or Capture One, they may not look the same as they would on the back of your camera.

On top of that, each picture profile has its own exposure bias. Some may lean towards a brighter image, while others may favor a darker exposure. So even if the metering is correct, the photo you see on the LCD may look brighter or darker than the actual RAW image.

What about the Histogram?

In these two images, all the settings and variables are exactly the same, and the monkey is properly lit. The only thing that is different between the two scenes is the black foam core I placed behind the monkey. 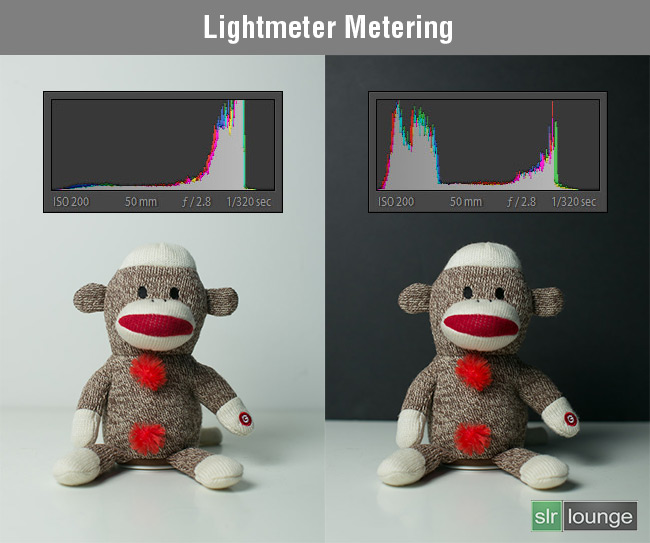 Why I use a Lightmeter 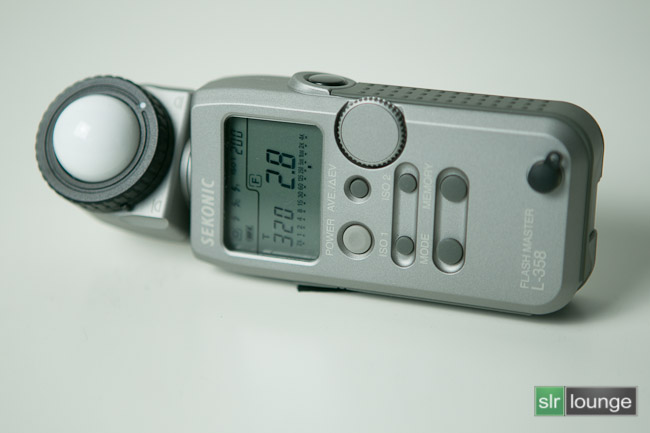 The ideal way to get a proper exposure consistently, however, is to get a lightmeter like the Sekonic L-358 Lightmeter. A lightmeter’s exposure measurement is subject-neutral because you measure by pointing the lightmeter at the light, not at the subject or background. It doesn’t get confused if the background is too bright or too dark or if the person is wearing a white shirt or a black shirt. The only thing that matters is how bright the light is when it hits the subject.

Although the Canon lens is very black and the paper towel is very white, they are both properly exposed at where the light is hitting both objects. You can see the details in both objects, and in this lighting, there was no clipping in the shadows or highlights. 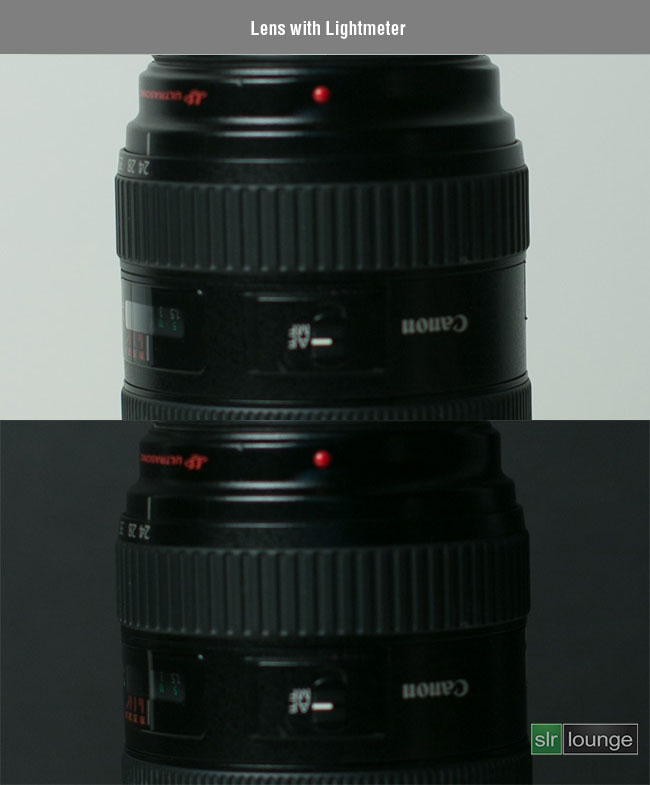 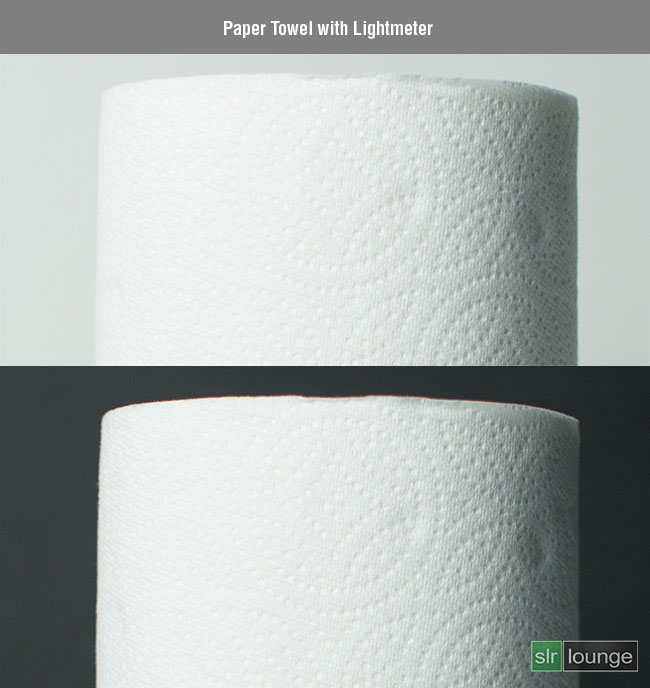 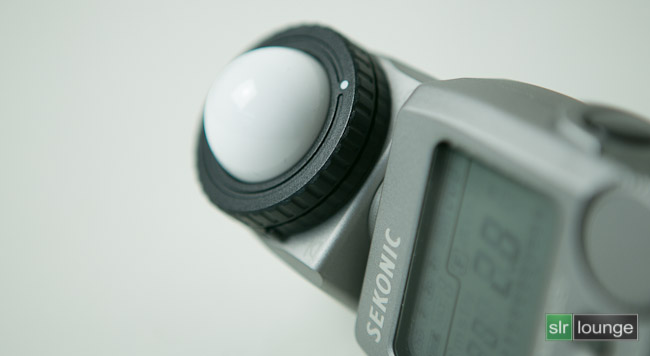 Finally, you just position the lightmeter in front of the subject (usually under the chin or the nose), point the white dome to the camera, and hold the trigger button to take a reading. If you are using flash, you can trigger the flash manually or use the optional Pocket Wizard transmitter to trigger the flash that is connected to a Pocket Wizard. That’s it!

Once you understand how this works, you can literally measure the light, set your camera control, and shoot away within a few seconds. This is much faster and easier than taking a photo and looking at your camera LCD, analyzing the histogram, and making an educated guess.

Today’s DSLRs are sophisticated machines. But they are not perfect. Because your camera still uses reflected metering, it’s important to know when it can be fooled. This is especially true in a scene with a lot of white or black color.

To obtain a proper exposure in difficult lighting scenario, you can compensate your EV manually if you know your camera’s metering bias, use a gray card, or use a lightmeter. The most accurate and consistent way to meter properly is with a lightmeter.

Creative exposure is subjective, of course, but it is still important to have the foundation in dialing in the proper exposure in any lighting scenario. After you can do that, the creative choices are up to you.

Stay creative and keep on shooting!

You can buy the gears used for this test with these links below: