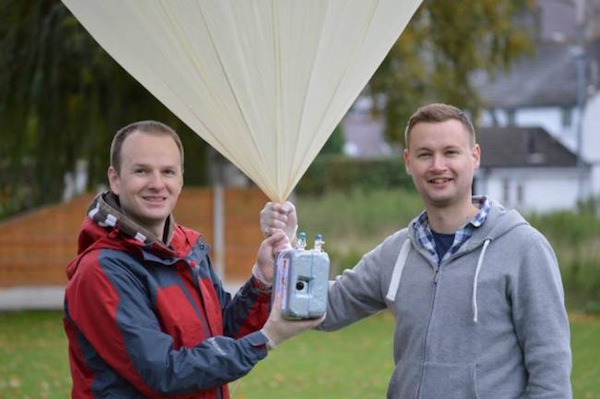 Apparently it is just common practice to send your toys on actual space missions theses day. In a similar fashion to the father who sent his kids toys into space, two Manchester men sent Lego figurines of themselves into space and captured it on video.

John Chippindall and Ian Cuinningham, two self professed “Geeks”, say that they spent around $500 to fund their “Toys-2-Space” project, which they aptly named “The Manchester Meteor”. They used a special balloon, an HD camera (GoPro Hero 3+?), and 2 Lego figurines meant to represent themselves.

After all was said and done the Manchester Meteor flew to heights of around 93,000 feet and the team was able to capture video of their Lego doppelgangers in space. The duo had to travel 75 miles from the launch point in order to recover their Legos and the HD footage captured from their experiment.

What If You Sent Your DSLR Into Space??

That is a lot of dedication, $500 is a steep price (in my opinion) to send a few lego’s and a camera up into space. That said, some of the video that this – and projects similar to it – has captures are pretty awesome. It would be a fun project to try and plan, it has inspired me to think about similar projects that I might be able to try.

If you would figure out a way to wirelessly control your DSLR from one of these rigs just think of the amazing images and video you would likely be able to capture. Maybe a work around could be setting it up for a motion timelapse, while not as cool as a true video some of the images would likely be stunning. The only concern would be the exposure, I guess shoot RAW and hope you can fix any issues…

What are your thoughts on this? Does sending items into space and capturing the adventure with photo/video sound like a fun project to you? How would you go about doing it? Share your thoughts in a comment below.