SLR Lounge > Inspiration > Thor’s Well: A Weekend Excursion Of Long Exposures With The Sony A7 II 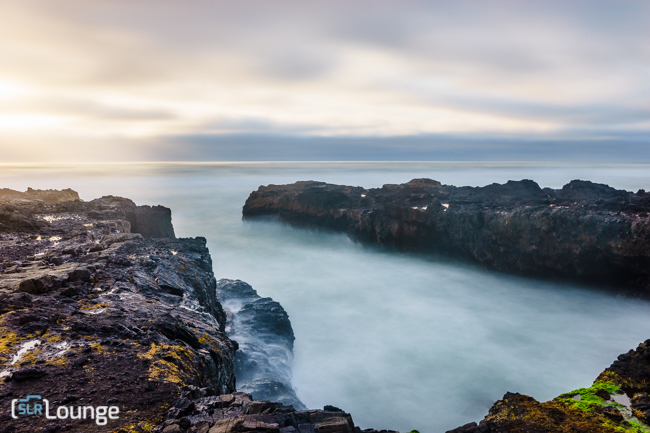 Thor’s Well: A Weekend Excursion Of Long Exposures With The Sony A7 II

One of my absolute favorite things to shoot in my free time is long exposures at the coast, especially the Oregon coast. You get a little bit of everything here, treacherous rock embankments, and lovely brown sand beaches (and everything in between).

One of the gems of the Oregon Coast is a place called ‘Thor’s Well.’  It’s located south of Yachats next to a place called, “Cape Perpetua.” It is a rocky part of the coast where years of weathering has created this ‘well’ in the rocks, and when the waves come in, they fly up from inside the well. It is a really awesome place and a popular location for photographers to visit on their trips to Oregon.

Luckily, I only live about 2.5 hours away myself, so this weekend, I decided I wanted to get some long exposures of the sunset out at Thor’s Well. Sadly, the cloud cover killed what would have been a gorgeous sunset, but they ended up making the long exposures a little more interesting as well, so it worked out.

This first shot you see above is of the actual well. I rather enjoyed it personally because of the sort of magical haze (from the water going back down the well) that looks like it is coming out of Thor’s Well. That said, it’s not the typical sort of shot you see from Thor’s Well.

Most shots are like the ones below, which capture the movement of the water flowing into and out of the Well. The key to these is not using quite as long of an exposure as I did in the first shot above. I should note, these were obviously not handheld, the camera was stabilized with a Mefoto Carbon Fiber GlobeTrotter Tripod. Honestly though, any tripod would have worked. The time of day I arrived was ideal because the tide was just starting to come back in, so I was not too worried about a large wave crashing over the rocks and into my tripod (this is a concern at Thor’s Well when the tide is up).

If I am honest, the shots that I liked the most from the trip were actually taken just up the beach from the crowds around Thor’s Well. There, just a few short minutes of walking away, I found this great little rocky inlet that I thought was perfect for some eerie long exposures.

The first shot you see below was a ‘before’ shot taken with the Sony 24-70mm F/4 Zeiss lens I have in for review, but unfortunately I forgot my ND filter that fits the lens, so I had to switch back to the 28-70 kit lens after taking this shot.

Besides the fact that I came to do long exposures, I really like the shot. The colors from the sky, and the movement you can still see in the water makes for a beautiful image of the rocky coast.

As you can see, it is similar to the shot with the 24-70mm Zeiss above, just the water has dissolved into that cool murky/eerie look you get from long exposures. I was really impressed with what I was able to capture, and the quality of the images with the 28-70mm kit lens. So much so that I am wondering why I would want to upgrade to the 24-70mm Zeiss lens.

Finally, just a little walk further north up the coast, I found another fun rock formation, which I thought looked awesome in black and white. This shot was also produced using the 28-70mm kit lens in combination with the ND 1000 filter; it is probably my second favorite shot from this trip.

I should also note that all of the images that you have seen in this post were post-produced using the easy to use and powerful SLR Lounge Lightroom Preset System. It literally took me more time to remove dust specs from these images than it did to produce the look that I wanted (and even that was easier thanks to the dust removal mode in the preset system).

All in all, it was a great trip; my first utilizing the A7 II exclusively. I was really impressed with the images that I was able to capture, and the kit lens blew my mind in regards to what it was able to produce in comparison to the 24-70mm Zeiss lens (but more on that later in the 24-70mm Zeiss review).

So, next time you are in Oregon (if you have not been before), I highly recommend trying to find some time to make a stop at Thor’s Well.