SLR Lounge > Camera Reviews and News > The Canon EOS-1D X – Will it be a Game Changer? 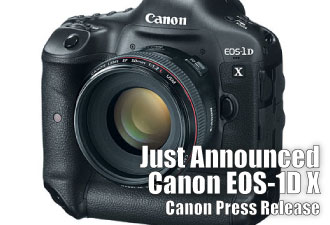 The Canon EOS-1D X – Will it be a Game Changer?

Just yesterday, Canon released the initial press release for the EOS-1D X. The big question is will this camera be the next game changer? In particular, will Canon be able to steal the title of “Low Light Champion” back from Nikon?

Well, if the real thing lives up to what it claims to be on paper, I think the answer will be a resounding YES! Here are a few pf the major improvements below:

1) Improved Image Quality and Low Light Sensitivity – In addition to improved image detail and overall quality, the EOS-1D X is able to shoot natively (within its standard range) from ISO 100 – 51,200 with expanded high settings of 102,400 at H1 and 204,800 at H2.
2) New 61-Point High Density Reticular Auto Focus – A large overall improvement in the AF system when compared to all of the prior Canon DSLR boasting improved diagonal AF point sensitivity.
3) Super High Speed Mode – The Canon EOS-1D X has the ability to shoot up to 14 FPS at full 18 megapixel resolution.

What does this all mean? Well, if this camera is as good in real life as it seems on paper this is going to be a major game changer in the industry. For one, Canon will be able to steal back the “Low Light King” title from Nikon, albeit temporarily as this always goes back and forth.

But, for you Canon users, you can expect that all of these features will be trickling down to Canon’s other DSLR models over the next year or two. 5D Mark II owners should be ecstatic as the 5D Mark III should include most of the major features of the 1D X such as the low light performance, AF system, without the high speed modes. This hopefully will mean that Canon, in particular 5DM2 users, won’t be having to constantly play the “center focus recompose” game anymore.

For now, all we can do is patiently wait as this camera won’t be available until March of 2012. But, it should be worth the wait.

To see the official press release along with an overview of all of the new features, check out DPReview’s article here.

Book, DVD, Workshop or School. Which is Best and Why?