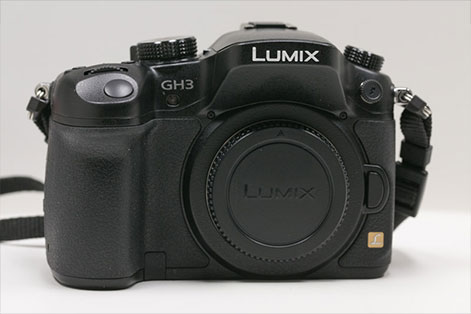 The Big Panasonic GH3 Review Pt. 1 with Comparison to GH2 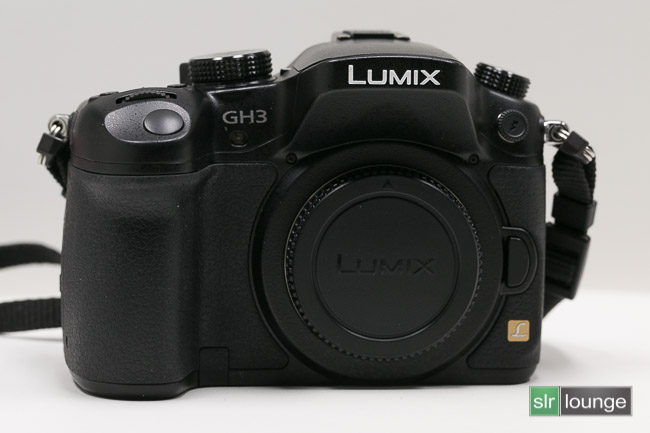 Recently, I had a chance to test the highly anticipated Panasonic GH3, and despite only having the GH3 for around 5 days, I have come to the conclusion that the camera is a very worthy successor of the Panasonic GH2. There are enough improvements in the still image quality, video quality, operational quality, and extra features to warrant the difference in price, as well.

Of course, it is pretty well known that both cameras are great for video, but for this first impressions article, I will focus more the build quality and features of the GH3 along with a studio test comparison to the GH2. The subsequent review will cover some in-the-field test to see how the GH3 fared during a real-life engagement session, as well as the video test and a look the LumixLink remote app.

Thanks to the larger size and magnesium body shell, there is no question that the GH3 feels so much more robust and better in the hand than the GH2. You really get the feel of a high-grade professional full-frame DSLR with the GH3, albeit in a smaller body. For those who think that the camera is too big, the only advice I can give is to just hold it. The grip feels great to hold on to and there is an increased level of stability and security when holding the camera with one hand. 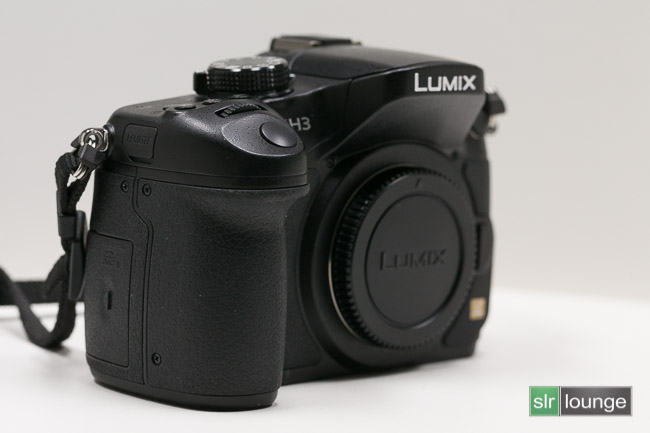 Furthermore, unlike APS-C and full-frame DSLRs, the lenses are still small and light in comparison. Lenses, particularly larger lenses like my go-to Olympus 4/3 Zuiko 14-54mm f/2.8-3.5 mkII zoom lens, feel nicely balanced on it. Even the diminutive Panasonic LUMIX 20mm f/1.7 pancake lens does not feel out of place with this body.

Just like a pro-grade DSLR, there are plenty of direct controls and customizable function buttons on the GH3. Starting out from the top plate, there are the buttons for white balance, ISO, and exposure compensation right behind the front command wheel, followed by the Fn1 button behind them.

Aside from these four buttons, the Wi-Fi LED indicator, and the adjacent Mode Dial and On-Off switch, the top plate is actually a bit sparse. I actually feel that the Record button should be placed up here just to bring the AE/AF button closer to the upper rear wheel since I use that AE/AF button to focus instead of the shutter button.

Nevertheless, it is nice to not feel too cramped up here. 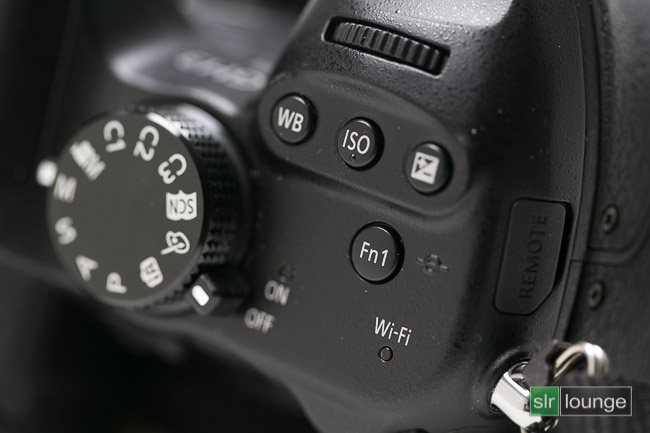 On the other side of the Electronic Viewfinder (EVF) is the Drive Dial for switching between Single Shot, Burst, Exposure Bracketing, and Timer. It may be a disappointment at first to see that the Focus switch has been moved to the back, but I realized that having it at the back meant that it is the Focus switch can be controlled by the right hand instead. 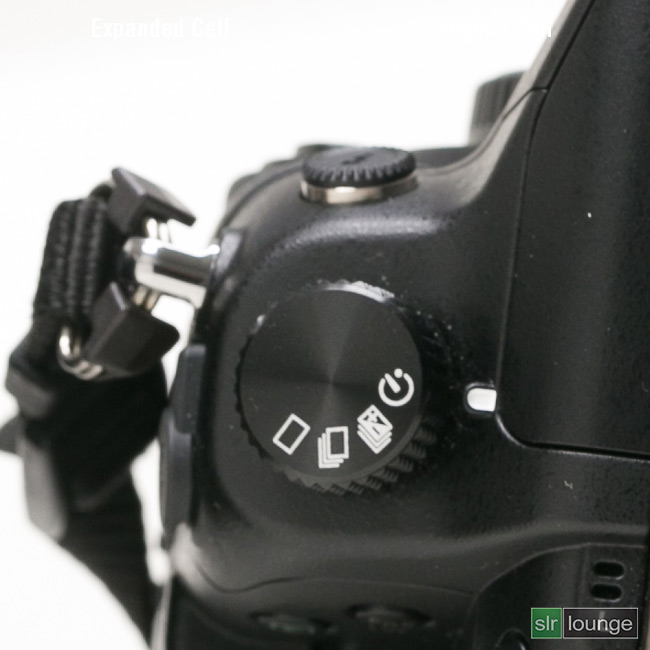 A new feature that many professional photographers will appreciate is the PC Sync Port on the front side of the GH3. The only problem with this port is the screw-on cap that comes completely off the camera, which means that you have to be careful to not lose this little cap. I would prefer that this cap stays attached to the body. Speaking of flash, I’m also disappointed that Panasonic decided to stay with a maximum sync speed of 1/160th sec when the Olympus OM-D provides highly usable 1/250th sync speed. 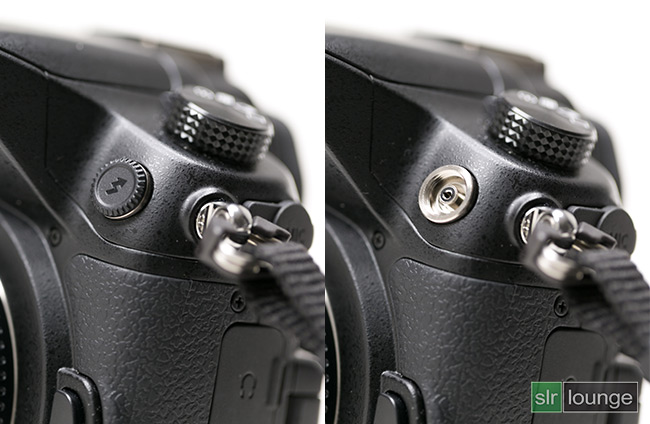 There are also two dials back here to go along with the dial by the shutter button. The top command dial and the front dial controls shutter and aperture, where the larger thumb wheel in the back allows you to scroll through menu settings. This lower thumb wheel is a bit recessed on its right side, however, which meant that you could only rotate the wheel from its left side. Additionally, I do wish I can zoom in and out with this lower wheel during playback and use the front dial for navigating through photos.

I do love the fact that the four-way thumb-pad within the lower thumb-wheel is now dedicated to moving the focus point around. In the GH2, you would have to either assign a custom Fn button to activate it or share the Direct Focus function with the other functions on the arrow keys. 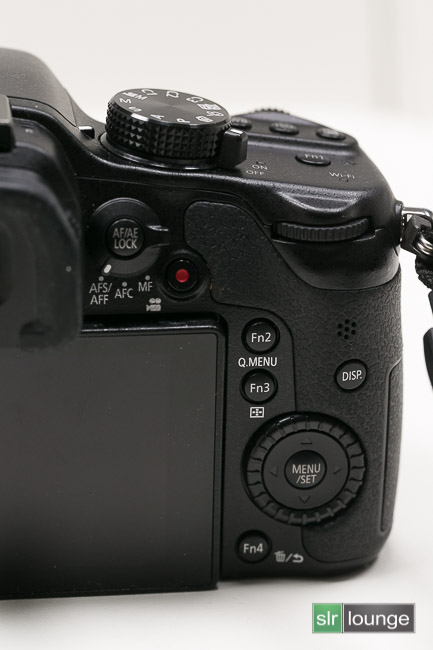 One great benefit of the larger body is the well-spaced layout in the back. There is plenty of space for each buttons and they are all within easy access to your thumb. In fact, the majority of the most important settings can be accessed by the right hand, which makes it easier to use for one-hand operation. As I mentioned before, the Focus Selector has been moved to the right side and now resides as a collar around the AF/AE Lock button.

If I can change one more thing in regards to ergonomics, it would be to move AF/AE button a little closer to the upper thumb dial so I can get to it even faster when I’m using the button to focus. 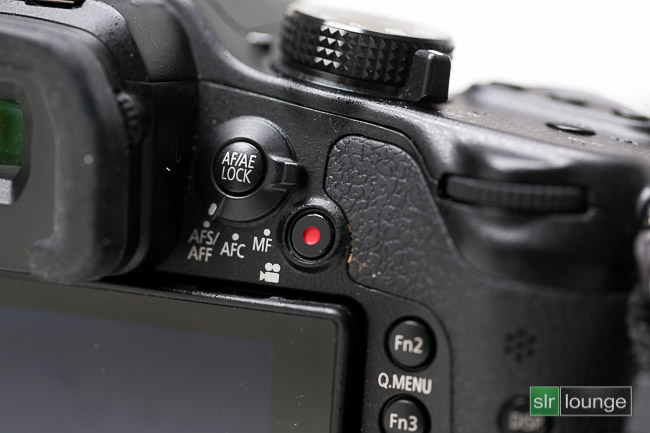 As for the touchscreen, it’s just great! I liked it on the GH2 and I love it on the GH3. The screen is larger and has a higher resolution, and the images just look so much more vibrant, sharper, and more accurate than on the GH2.

I also enjoy the ability to change AF point via the touchscreen on the GH2 and on the GH3, it is even better. And best of all, the AF points cover the entire viewing area!

As for the viewfinder, I find that is a bit of a mixed bag at first. I experienced that smearing around the edges of the image if I don’t view into EVF straight on, and the resolution doesn’t look as crisp as the GH2’s EVF. That said, the contrast is better and there is a lot less tearing and it only took 10 minutes to get totally used to the GH3’s EVF and make me forget its shortcoming compared to the GH2.

Size Comparison to the GH2

Just about every dimension of the GH3 is larger than the GH2, and that is a good thing, in my opinion. Everything just feels better to the touch and the more spacious layout makes it easier to shoot with the GH3. And compared to the plastic feel of the GH2, the weather-sealed magnesium-built GH3 just feels more robust in the hand. Moreover, there is also a pretty noticeable improvement in the tactile feel of the buttons, as well.

Like I mentioned before, you really have to hold it in your hands to really appreciate the improvements that Panasonic made in the overall build and quality of the GH3. 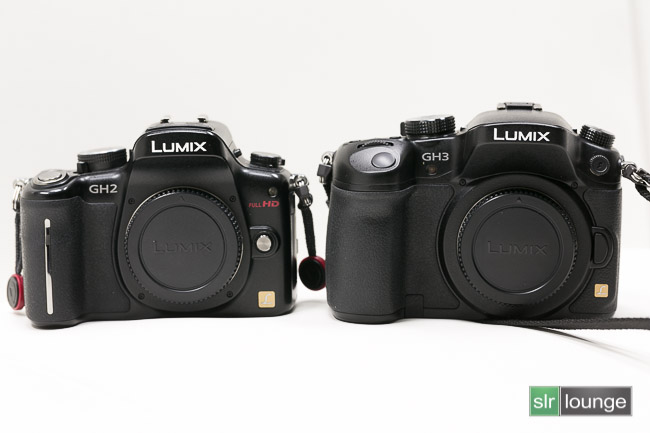 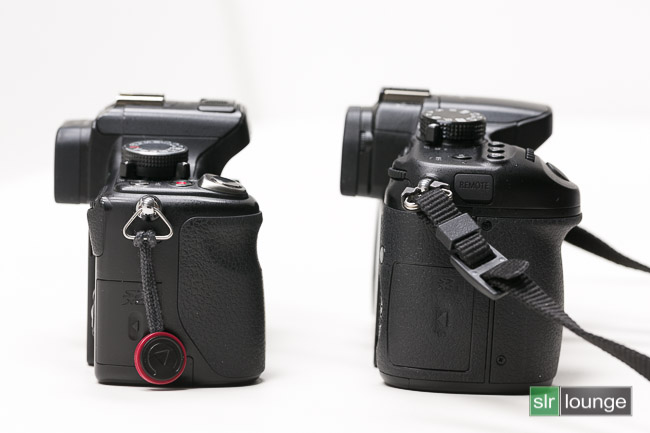 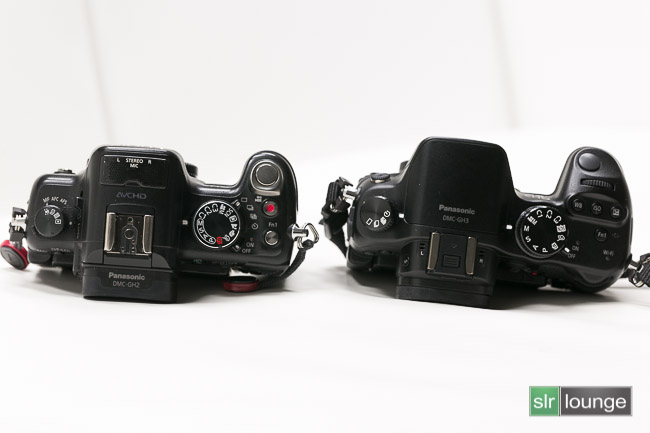 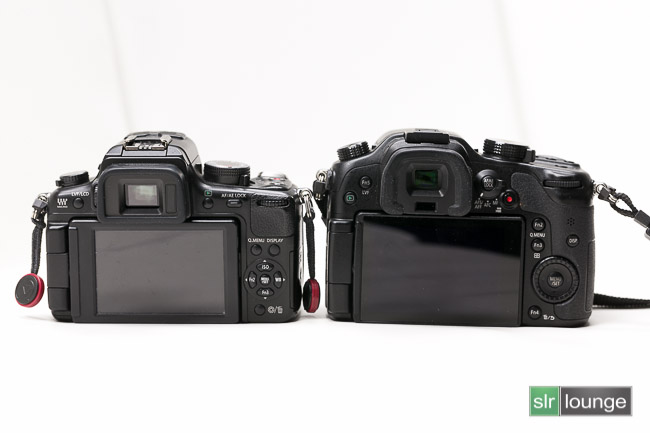 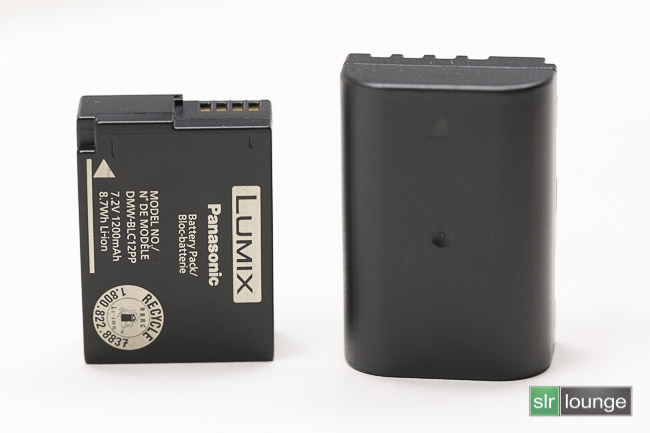 The larger body also allows for a larger battery, which in turn increases the battery life to about 540 images.

The Studio Still Life Image Quality Comparison to the GH2 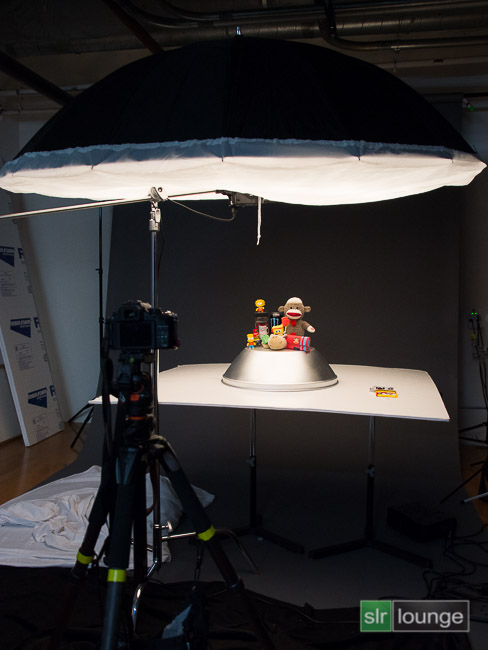 So here is the still life studio that I have set up in our studio. Besides having distractions in various areas of the office, we have our fair share of caffeine addicts.

We have one Einstein and a 86” Extreme Silver Parabolic Light Modifier (PLM) with a front diffuser sock pointing straight down and just ahead of the objects sitting on a 22” silver beauty dish which is on top of the white card that also serves as a bounce card.

For each round, I focused on Sponge Bob’s eyes in auto-focus, confirmed with zoomed manual focus, then switched the camera and lens to manual focus mode.

At the base ISO, the GH3 is exposes slightly brighter than the GH2. Interestingly, even though I set the Kelvin at 3200k for both cameras, the GH2 reported 3350k in Lightroom 4. There is a little hint of noise at the base ISO 200, but other than that, the images look great for both cameras. The GH2 never really had too much issues in the low ISOs other than a limited dynamic range compared to the OM-D and APS-C mirrorless cameras like the NEX5 and the Fuji X-Pro1. Both the GH2 and the GH3 have comparable IQ until around ISO1600.

The image quality gap starts to widen as we go higher in ISO. Around ISO1600, you start seeing coarser grain in the GH2 image, whereas the GH3’s grain stays relatively fine and easy to work with. This is most noticeable around the 5-Hour Energy drink.

ISO3200 is typically where I have to really be careful with the GH2. More often than not, the image quality and grain noise is starting to get noticeable even at a 1280px resolution. Although the GH3 also starts to exhibit noise, it is still well-controlled and very usable. Color fidelity is still good for both cameras with this test, at least, and the GH3 holds around a ½ stop advantage over the GH2.

By ISO 6400, there is probably about a 1-stop difference in image quality between the GH3 and the GH2. The darks and shadows really start to suffer with the GH2, and additionally, there are some color fading particularly in the yellow areas. The noise is grainy enough that I rarely use it for any images beyond web use. In my experience, I hesitate to take images at ISO6400 with the GH2 because I know that quite a bit of post-processing will be needed, especially if there is poor lighting to begin with.

The GH3, on the other hand, can still take pretty good images at ISO6400 that are on par to that of the Olympus OM-D and APS-C mirrorless cameras. I can comfortably dip into ISO6400 as the situation arises for the GH3 and be confident that I can get enough usable images.

Finally, I would only shoot the GH2 at ISO12,800 if I absolutely have no other choices. The image quality has degraded enough that even in small web resolution it is noticeable. Even the exposure and dynamic range are severely limited. On the other hand, with some good lighting, the GH3 can manage to shoot ISO12,800 for web uses. But either way, a faster lens is preferable to using such a high ISO for either the GH3 or the GH2.

I am a fan of the Panasonic GH3, and between the improvements in build quality, the better ergonomics, the weatherproofing, and the upgrade in image quality in the high ISO, there are enough reasons to upgrade from the Panasonic GH2.

There is a lot more to talk about, but I will go over it in Part 2 of my review on the Panasonic GH3. In the next article, I will cover my experience with the GH3 in the field, the dynamic range and shadow recovery capability, the movie recording capability, and Panasonic’s LumixLink remote app for iOS and Android.

Sample Shots from the Part 2 of the Panasonic GH3 Review

6 Tips for Keywording in Lightroom 4