SLR Lounge > Inspiration > Tips & Tricks > Sure I’ll Shoot Your Wedding, But I’m not Responsible If I Lose Your Images – The New Business Mantra by U.S. Airways 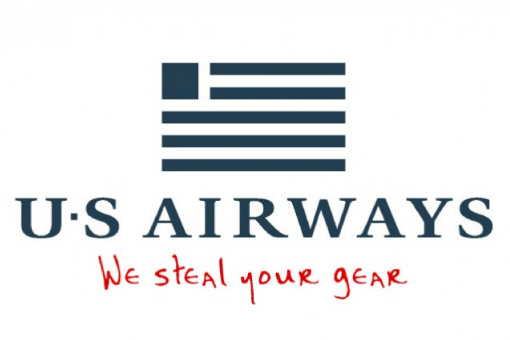 Sure I’ll Shoot Your Wedding, But I’m not Responsible If I Lose Your Images – The New Business Mantra by U.S. Airways

Photographers be aware, flying U.S. Airways may not be such a good idea. Our good friend Lee Morris (Co-Founder of the FStoppers) and his girlfriend boards a flight from Philadelphia to New York. As they board the plane, Katy is told she must “check” her carry on bag and put it below the plane as there was no more overhead room in the cabin bins. Sounds normal enough.

Well, when she arrived in NYC her bag didn’t show up at baggage claim. Once it became apparent that the bag wouldn’t show up, she spoke with staff who reassured her that her luggage would be delivered to her the next day. Unfortunately, when Katy got her bag the next day her laptop was missing. Yes, it was removed from her bag.

In addition to the cost of the laptop, unfortunately Katy made the mistake of not backing up several important files (including photos) that are now gone and are irreplaceable. Now, I don’t want to imagine what it would be like if I lost my laptop. All I know is that the air would be filled with virtually every creative expletive I could muster. While this scenario doesn’t seem like it could get any worse, get ready, it’s about to.

When told of the issue, U.S. Airways responded by essentially saying, “we cannot be responsible for your missing items.” The actual letter is below for those of you that would like to read the full letter, which I must say is a masterfully written document. 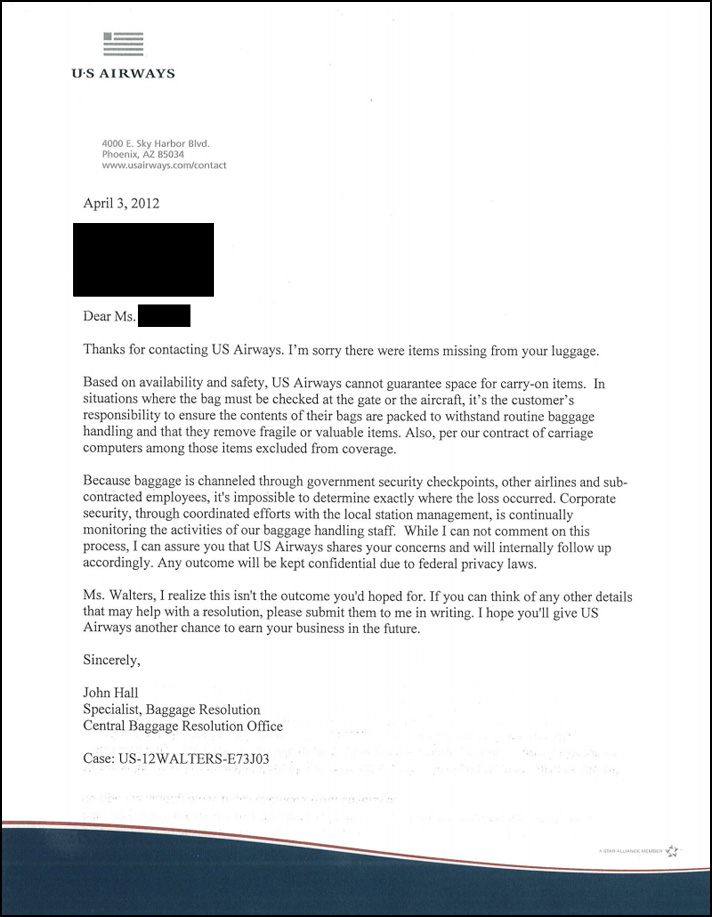 As a business owner, I think this would be a fabulously convenient mantra to adopt. But, I think our thriving business might hit a road block if I were to tell my clients, “I’ll take your money, shoot your wedding, but if anything happens to the photos or if I just don’t take good photos, I can’t be held responsible.”

So, we are rallying. It is time for us to band together and collectively shout, “THIS ISN’T OK!” Photographers are held to extremely high standards of responsibility, and so should major companies! So, Tweet, Facebook, Google and do whatever it is that you must do to get the word out! While the contents of a laptop are irreplaceable, at least a U.S. Airways should make an effort to replace the laptop itself.

So John Hall of U.S. Airways, here is something that might help with your “resolution.” Admit fault, replace the laptop at cost, and just maybe you might earn some of our business in the future. But, for right now, I personally refuse to give business to a company who doesn’t have the same basic value and ethics system that we have in our small business. In the meanwhile, if anyone is stuck on a U.S. Airway flight, just be sure to keep your cameras, lenses and other valuables with you at all times!

Read the original article on FStoppers.com

Your Chance to Back Benjamin Von Wong with SLR Lounge