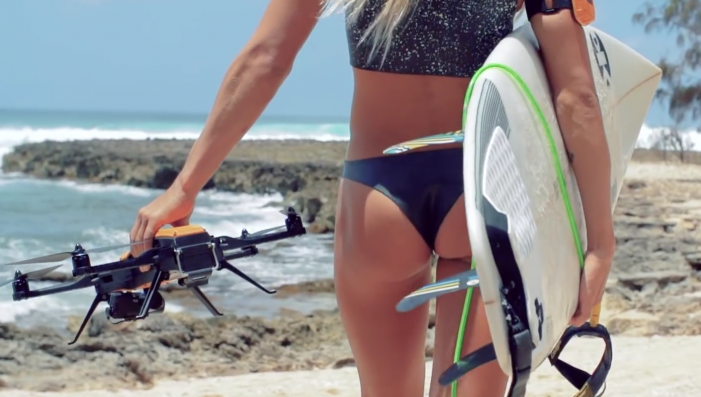 With the Olympics just around the corner, photographers are waiting patiently to see the remarkable images to come forth from the games that highlight gear we have only dreamed of using or creating. With the quick paced advancements of photo & video technology, monumental events such as the Olympics have unparalleled media coverage, offering varied angles and producing high-resolution content, and you can’t help but think the drone featured below would be perfectly suited.

[REWIND: GETTY IMAGES DOESN’T PLAY WHEN IT COMES TO PHOTO GEAR FOR THE OLYMPICS]

It’s called Staaker. Yes, pronounced exactly how you think it is (Stalker), the GPS drone that uses a tracker to follow and film you automatically. Although this pursuant isn’t one of the tools to be utilized for the 2016 Olympic Games in Rio, it is by far one of most brilliant resources for sports photographers and enthusiasts worldwide. Using artificial intelligence, Staaker anticipates your every move, finding the corresponding angle that compliments your movements. It’s four rotor arms come pre-assembled with propeller blades attached, all you have to do is move and like the name suggests, it follows in pursuit.

I’ll Stalk The World & Melt With You

It is controlled by a modestly-sized tracker, strapped to your arm for convenience, containing a “GPS radio that’s 20-times stronger than the GPS in the iPhone.” It has a small LCD screen with 8 navigation buttons – compare that to the monstrous DJI Phantom controller and you are looking at two very distant cousins. The $1,200 waterproof drone has several operable modes that follow you around without having to navigate it through terrain but still maintaining the ability to control it’s path if need be:

Upcoming Updates for the Staaker Drone

Video footage is currently recorded by the GoPro Hero 4, the champion of all convenient adventure, travel, and sports photography and videography. Unlike its heavyweight competitors such as the DJI Phantom or the Yuneec Typhoon, Staaker hasn’t produced their own recording device but hopes to implement an HD camera in the future.

The one downside, especially for this generations petulant need for instant satisfaction, is that you are unable to see “what the drone’s GoPro camera sees until you offload the video later.” The update is already in the making for this huntsman of a drone, an advanced controller with a “large, color touch-screen, complete with real-time video feed” is expected for later next year says VP of Marketing for Staaker Mike Luff to Mashable.

See if you are ready to be pursued:

The Most Important Part Of Product Photography Lighting

How Much You Should Charge for Photography