SLR Lounge > Inspiration > Tips & Tricks > How I Shot It: Cruising The World In Infrared On Bike 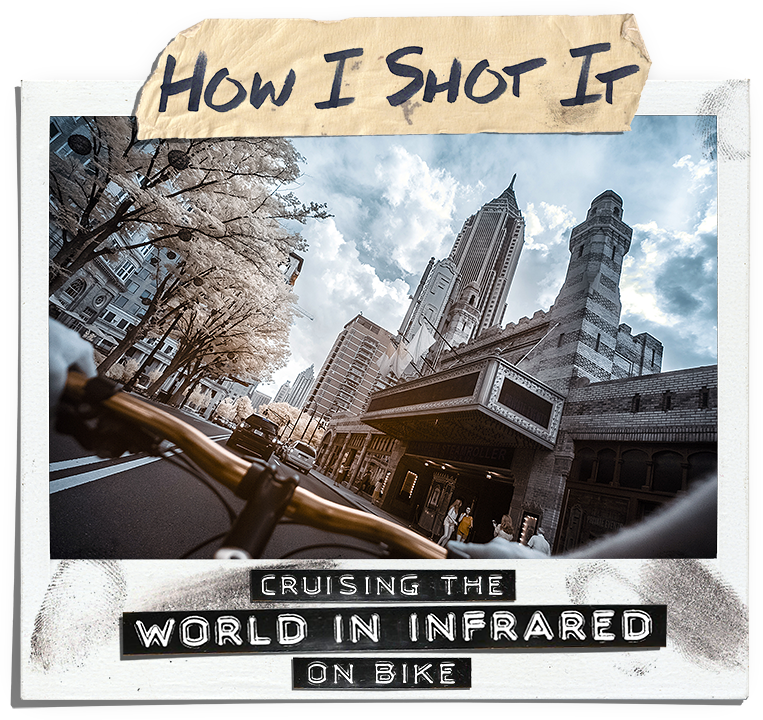 How I Shot It: Cruising The World In Infrared On Bike

I love the look of disdain (although I’m sure it’s jealousy) on the faces of passersby when I weave a crowded sidewalk.

I love the pure sense of freedom felt upon realising this contraption of metal and rubber is completely under my control down to the ebb and flow of even the smallest muscle movements. (I gulp when I think the wrong one could send me flying beneath the wheels of an approaching bus…)

If not for the two 26 inch bicycle rims planted beneath my feet as I write this, I would have pawned the camera hanging from my back in the dirtiest, shiftiest and most surreptitiously staffed pawn shop in the backstreets of Downtown Atlanta for a pair long ago.

Before we begin, I must give a round of applause to all the passionate pedestrians out there for enduring the lack of evolution that is to explore, commute or travel anywhere by foot – an exceptionally slow, yet tiring form of transportation. I can’t go anywhere on foot that my bike can’t take me in a faster, healthier, cheaper and more efficient manner. There’s a reason why the creation of the wheel serves as a testament to human intellect and progress.

“C’mon Ma, can I borrow the keys? My generation is carpooling with doom and disease.” – El-p

Put on your brakes… I’m not talking about automobiles. Driving is even worse: Nearly 30% of all USA’s carbon emissions come from the transportation sector alone. 15% of all global warming can be directly attributed to noxious, petroleum-based transportation. While the shorelines of Fiji Islands recede, my environmental foot-print stays in the shape of mountain bike tread.

As a love letter to the raw power of the velocipede, I wanted to take a photo that epitomises the sensational experience of coasting down the famed Peachtree Street in Atlanta on bicycle (as I do to and from work on an almost daily basis) and pays homage to the many landmarks that can be found there.

I could simply wait on the roadside with my camera and snap a photo of the next cyclist who rides past. However, the point of this picture is to express my experience on the asphalt and intentionally put the viewer on the seat of my bike. What better way to articulate this than from a first-person perspective?

A pair of hands clutching the handlebars will act to frame the photo, give it a distinct yet subtle context and evoke a sense of motion within the viewer. Above my chain-grease covered knuckles, the endless vista offered by peering down Peachtree Street (a single-point perspective) will convey an alluring depth.

Strapping an action cam (like a GoPro) to my head could be a viable method to achieve the photo in the concept sketch: The wide angle lens will capture the sky, the road/buildings before me and both of my hands holding the handlebars – a perfect depiction of the scene as viewed from my eyes – except for one problem. I don’t have an action cam.

[REWIND: SEE THE ‘WORLD IN INFRARED’ WITH YOUR OWN DIY CONVERSION]

My weapon of choice will be sure to put a kink in the chain: an IR-hacked EOS 1000D with a Tokina 11-16mm ultra-wide. I could take the shot handheld, but I don’t want to break the illusion by suggesting I might be holding my camera in one hand. While not an exceptionally heavy system, I don’t need to speculate for hours to know why I can’t strap this camera to my head with relative ease: 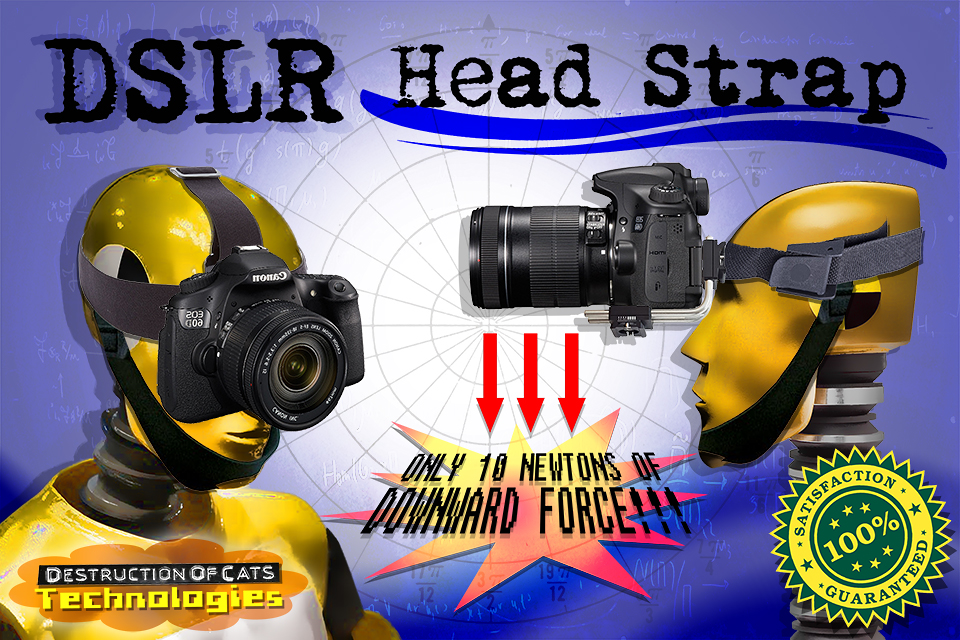 In utter avoidance of this horrible product, I must instead advocate the use of a superior method with which to mount the camera…

The ‘BEV [Bike/Bicycle’s Eye View] perspective’ (as it shall be dubbed from this day forth) is a nifty trick of mine involving the use of g-clamps to mount a tripod to a bike frame. With the camera attached, I can capture the sky, an uninterrupted stretch of urban jungle along Peachtree Street before me and both of my hands on the handlebars – an approach that will result in a unique ‘bicycle-eye view’ of the scene. 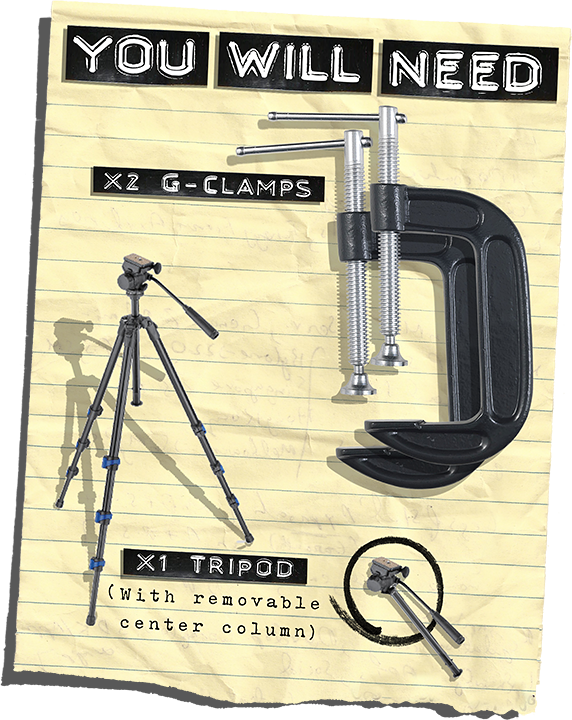 G-clamps (also known as C-clamps) are no more than a few dollars from Home Depot. A tool traditionally used for carpentry, today we will repurpose and innovate…

Put on your brakes: It’s important to use a tripod with a removable center column. There’s no point trying to attach a WHOLE tripod to the bike – that’s an unnecessary inconvenience. Instead, one must simply remove the center column (the piece attached to the tripod head) and clamp that to the frame.

I’m using a cheap Inca i351. The metal construction makes it a heavier piece of equipment overall, but you can’t beat the strength it offers when under pressure from clamping. A plastic center column can break very easily if it’s clamped too tightly.

Remove the center column from the tripod and position it on the bike as indicated in the sketch (below): 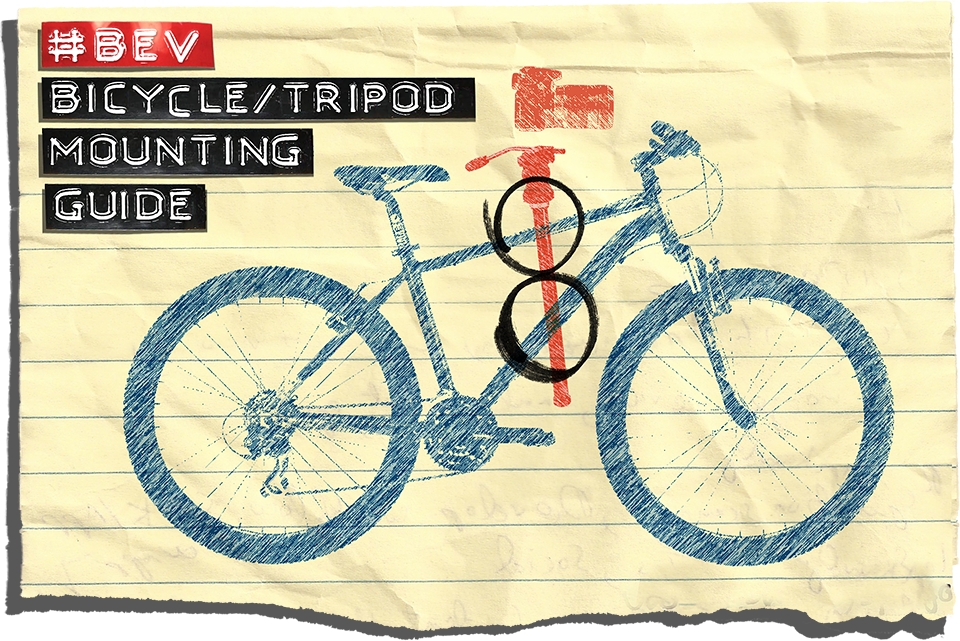 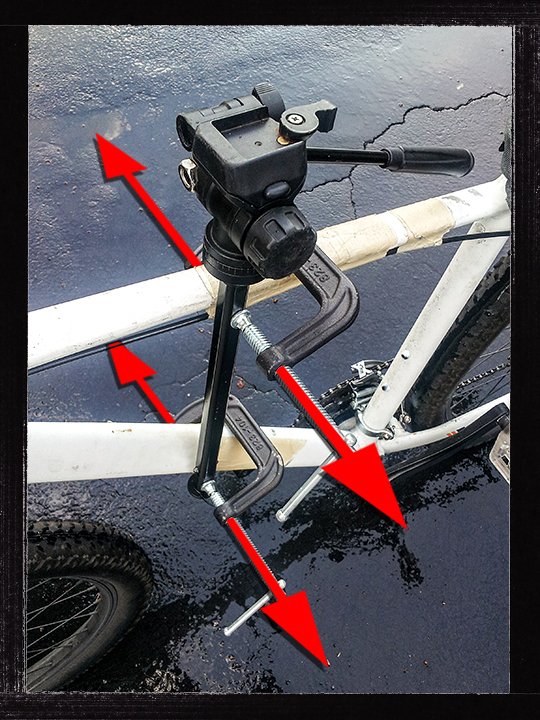 Secure the center column to the bike frame using 2 G-clamps at the 2 attachment points (indicated by circles) in the sketch (above). 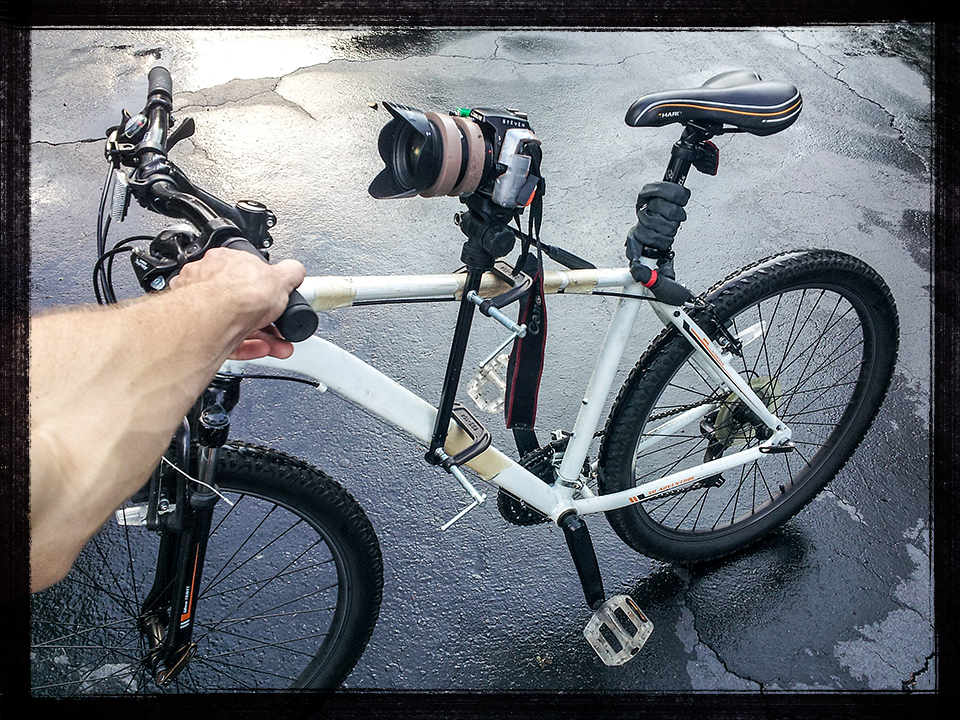 The G-clamps must be positioned laterally (along the transverse/horizontal plane) on the bike frame (above). 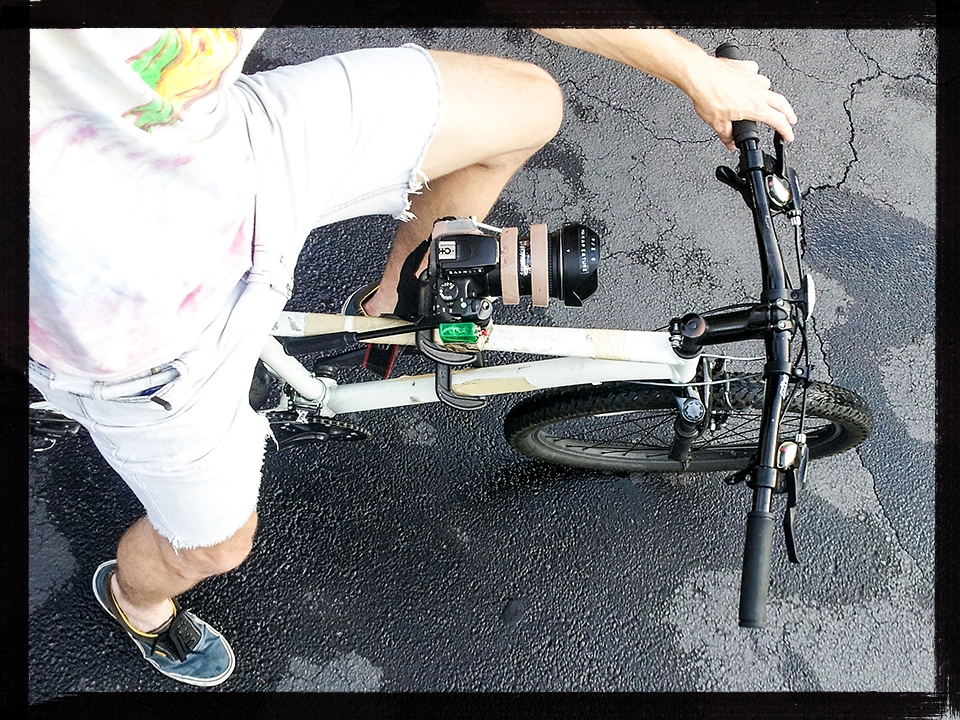 As no two bikes are the same, there is no definitive point to mount the center column to. Perhaps you will find the camera is too far from the handlebars or too close to the seat. Maybe your legs hit the clamps as you pedal: Reposition and adjust accordingly! 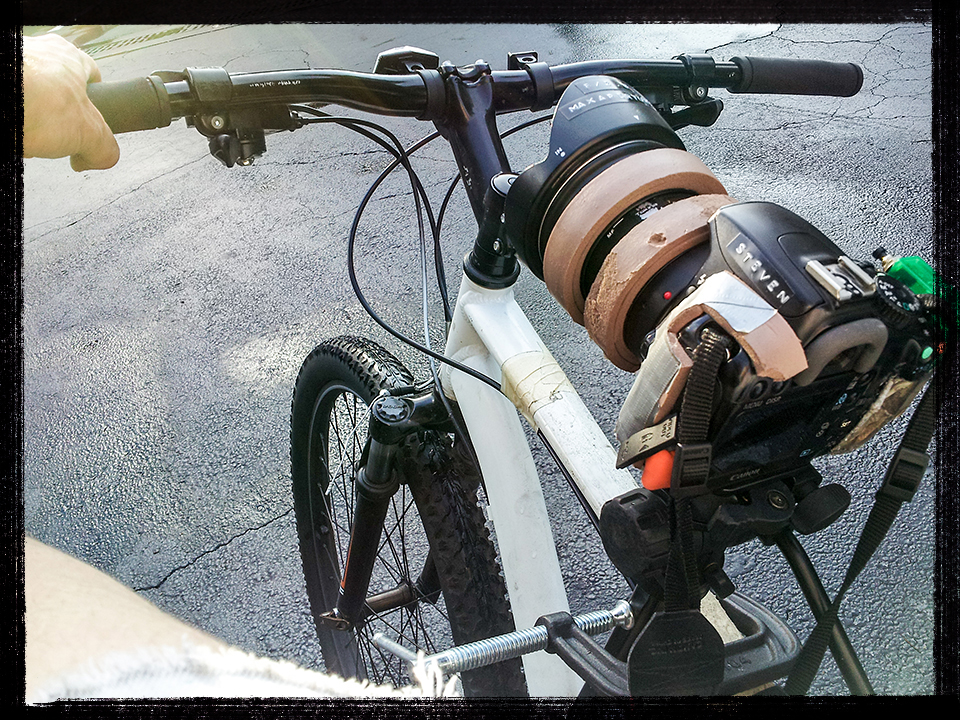 Once the camera is mounted, correctly positioned and focused, saddle up because you are ready to roll…

While an intervalometer or remote would work great for taking the actual photos, the simple act of setting a 2 second timer on the camera allows me to press the shutter button and place my hands back on the handlebars in time for the photo.

At this point, your attention should be on riding rather than composition. We are shooting from the hip here (literally and figuratively), so you may need to tweak the position of the camera multiple times until you get your desired picture.

Here’s a series of my failed pictures compiled into a timelapse:

It took me no less than 50 attempts of riding past the Fox Theatre in the bubbling heat of a Georgian summer before I got the photo I wanted.

Lighting typically used for bright, eye-catchingly colorful displays like neon light signs and giant LED panels are not designed for people with infrared vision in mind. As a result, they are usually poor emitters of infrared light. Rather than seeing the glimmering sign and glowing marquee of Fox Theatre like we are used to, IR-photography portrays the historic landmark of Atlanta in a dark atmosphere of desolation and abandonment…

The 3 flags hanging from Fox’s awning (2 of which are American flags) are rendered white due to their high levels of reflectivity in the IR-spectrum, subtly suggesting symbolism of surrender… 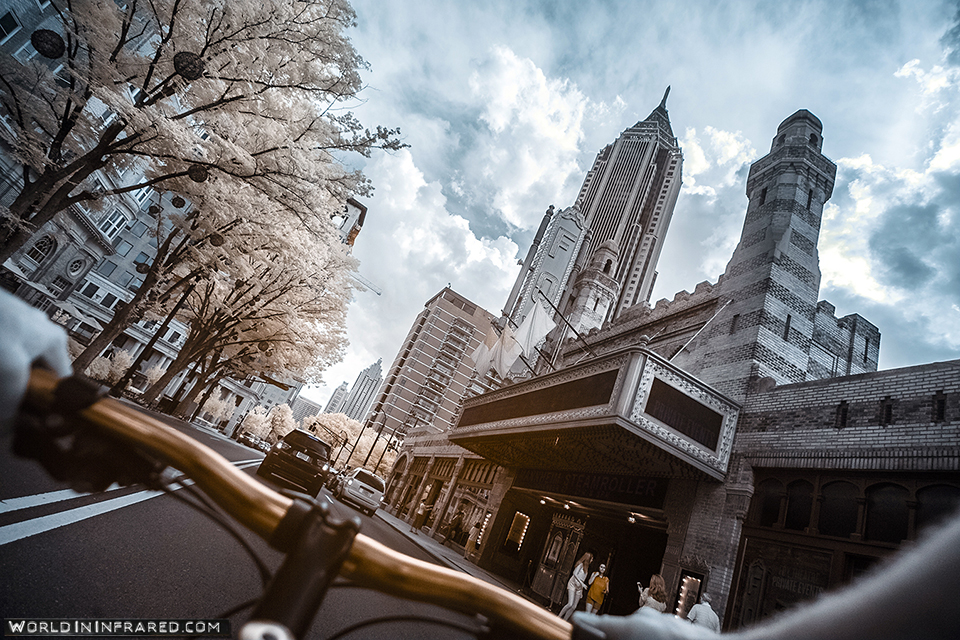 [RELATED: A QUINTESSENTIAL GUIDE TO THE WORLD IN INFRARED: COLOR PROCESSING]

Another aspect introduced with IR-photography is the dark, high-contrast sky: It gives the picture a HDR-like quality which evokes a dramatic mood. If there were no people or cars around, I would easily mistake this as a scene from The Walking Dead (Shot on location in Atlanta, Georgia)!

Wedding Photography Pricing Tip – New Photogs, Are You Overpricing Yourself?

DIY: Build A Camera Slider With Bearings For Under $100