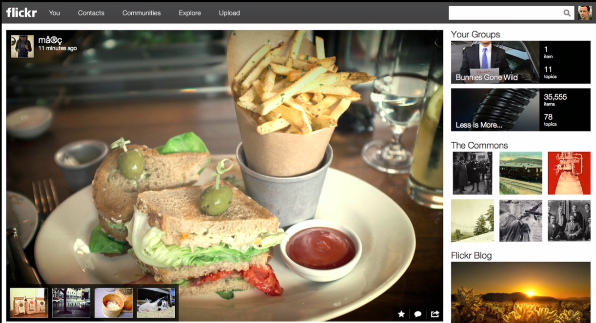 It has been almost 3 months since the Flickr redesign and the effects of the investment by Yahoo are already being seen. While many longtime users pushed back against the “new Flickr”, the gamble appears to have worked in Yahoo’s favor. Traffic and usage are up across the board, and they are only rising.

According to a report by SimilarWeb in the month of April 2013, just after the site redesign, Flickr’s monthly traffic hit about 86 million site visits. By July 2013 that number jumped to over 110 million site visits. That is a jump of 26 million visits in just one month’s time – very impressive to say the least. Not only that, but during that same time-period, average time of the site views jumped from 4.5 to 5 minutes, and social media traffic jumped from 9.7 million to 13.7 million.

People wondered if a redesign would be able to revitalize Yahoo’s aging and stagnate image hosting service. As you can see, it appears that it has as the numbers speak for themselves. People are returning to Flickr in droves, and more importantly, they are returning and using the site more than before and sharing images more than before.

Say what you will about Yahoo and the mishandling of Flickr, or the backlash from longtime users over the new changes, but it’s very clear that the public as a whole is impressed and happy to return to Flickr.

What are your thoughts? It has been several months now since the Flickr redesign. Have your impressions changed at all since it was released? Let us know in a comment below!

Pinterest: Why and How Photographers Need to Use This Photo-Friendly Platform