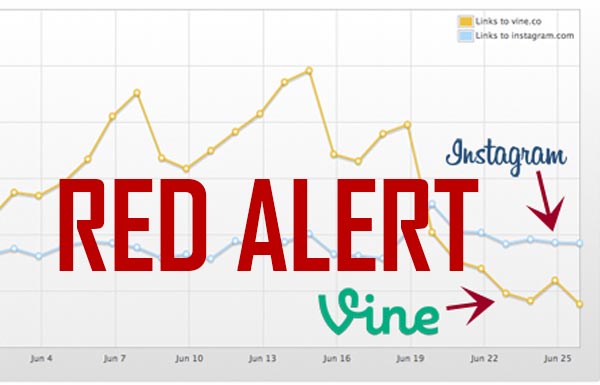 Red Alert Vine! Video on Instagram having an instant effect on Usage

It has only been a week or so since Video on Instagram made its glorious entry into the video sharing market previously only occupied by Vine. At launch it seemed that Video on Instagram was quite an upgrade over the services that Vine provided, but it was unclear how much of an impact it would have on Vine. That is no longer the case, and it must be Red Alert at Vine headquarters.

In the week since Video on Instagram was released Vine has seen a 70% drop in shares on twitter. Now sure maybe people are just not sharing their Vines on twitter anymore… but the reality is that its far more likely that they are simply not using Vine now that Instagram does video. It is actually quite alarming how quickly Video on Instagram has had an effect on Vine, normally newcomers to a market take some time to really settle in and longtime leaders usually hold on to theirs users longer than a week.

I mean how long it took Facebook to really supplant MySpace as “The” social network? It was certainly a lot longer than a week. Usually this sort of vast market shift happened slowly over months or even years, not within a week of a new competitor joining the market. I can only imagine what things must be like at Vine headquarters right now. Needless to say they are going to have to up their game if they hope retain their users. They still have the benefit of being the first in the market, if they can upgrade their service and at a minimum match Video on Instagram on features I think that they can be ok going forward. But they need to move fast, they can’t take a year to develop their answer… its needs to come soon, within a month or two at the most. That is my thought anyways.

What are your thoughts? Is Vine simply outmatched by the Instagram/Facebook powerblock? Can Vine recover from the huge drop in users? Let us know in a comment below.

For the love of Snow and Ice: Christian Pondella