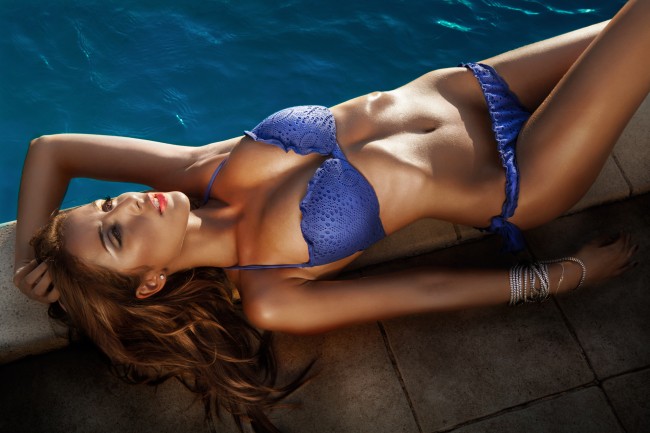 Retouching has come a long way and today’s industry supports it in every way. Yes, there may be occasional moments where post production is not encouraged, but these are rare cases. It is important to remember that postproduction did not just appear out of nowhere along with digital era. It existed way before that. In fact, it was used quite often to manipulate important, historical (analogue shots), but it was done in a very precise way so that it was not evident to the audience. But let’s move away from this literally ‘colorless’ talk and let’s dive into this tutorial where I will be explaining how I got from this: 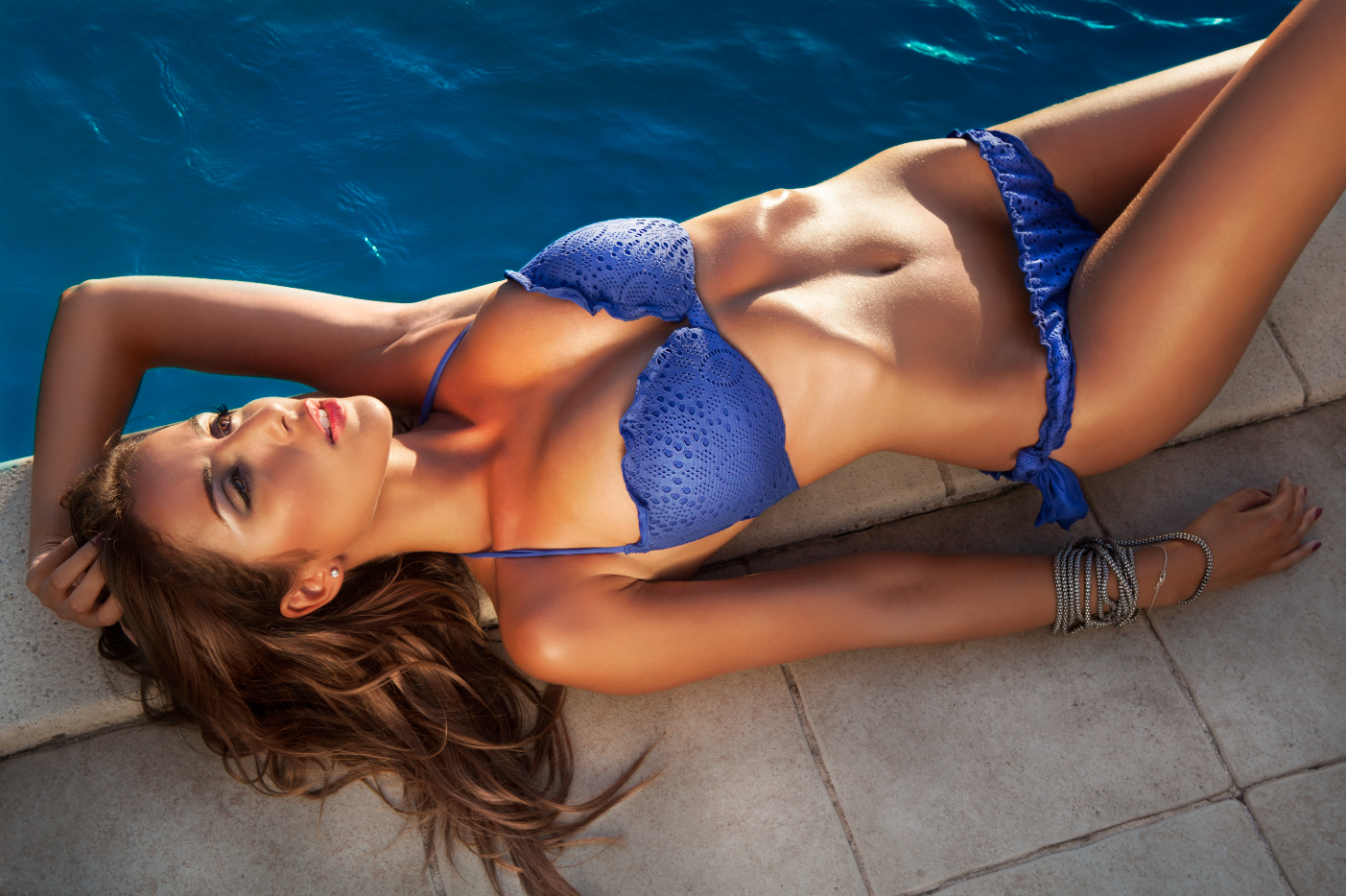 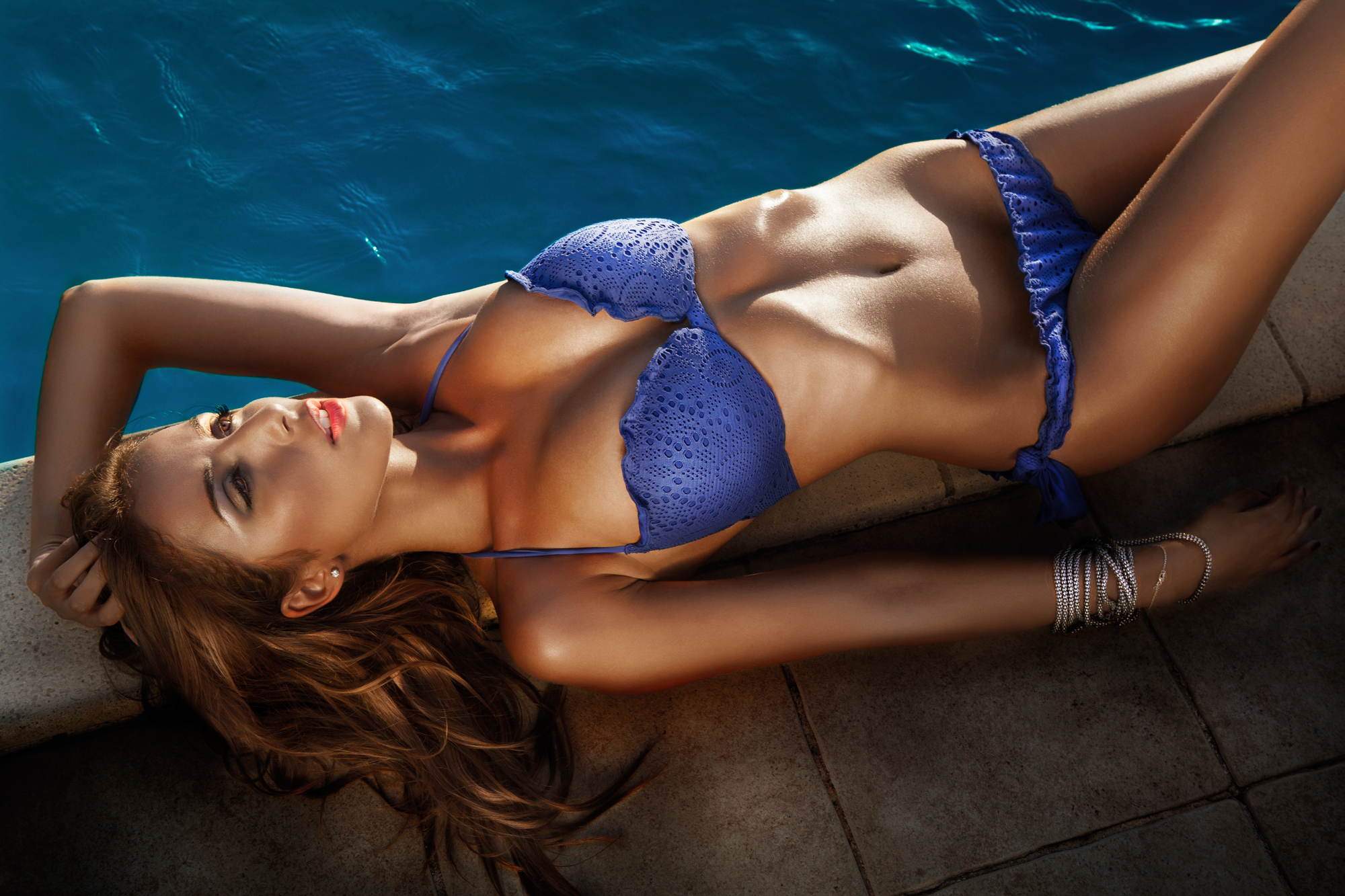 More specifically, I will be covering the topic of skin colour correction in Photoshop and how we get from orange tints to the high end ‘Prada’ like look.

If you shoot a lot of editorial fashion/beauty images, you will know that skin never looks the way we want it to, so it’s up you to correct it in post production where you will be able to achieve your desired look. For those who don’t know, this is typically done by using curves layers, color adjustments such as hue and saturation as well as a combination of photo filters. Lastly and most importantly, masks will allow us to specify an area that we want to effect.

The first step you want to take when correcting the color of skin is to apply dodging and burning. Usually this step is already embedded while correcting skin texture, but just for the sake of it,  I thought it would be good to make sure that your image has already been dodged and burned. Now, if you go back and have a look at the original, you will be able to see plenty of orange/yellow and red tints, especially in the upper chest area. This was caused by a combination of late evening sunlight as well as a gold reflector which was bringing warm light back into the shadows. However, that caused some skin coloration issues, as mentioned before, we have various artificial tints with plenty saturated tones, so the first thing that I did in color correction was bring down the saturation: 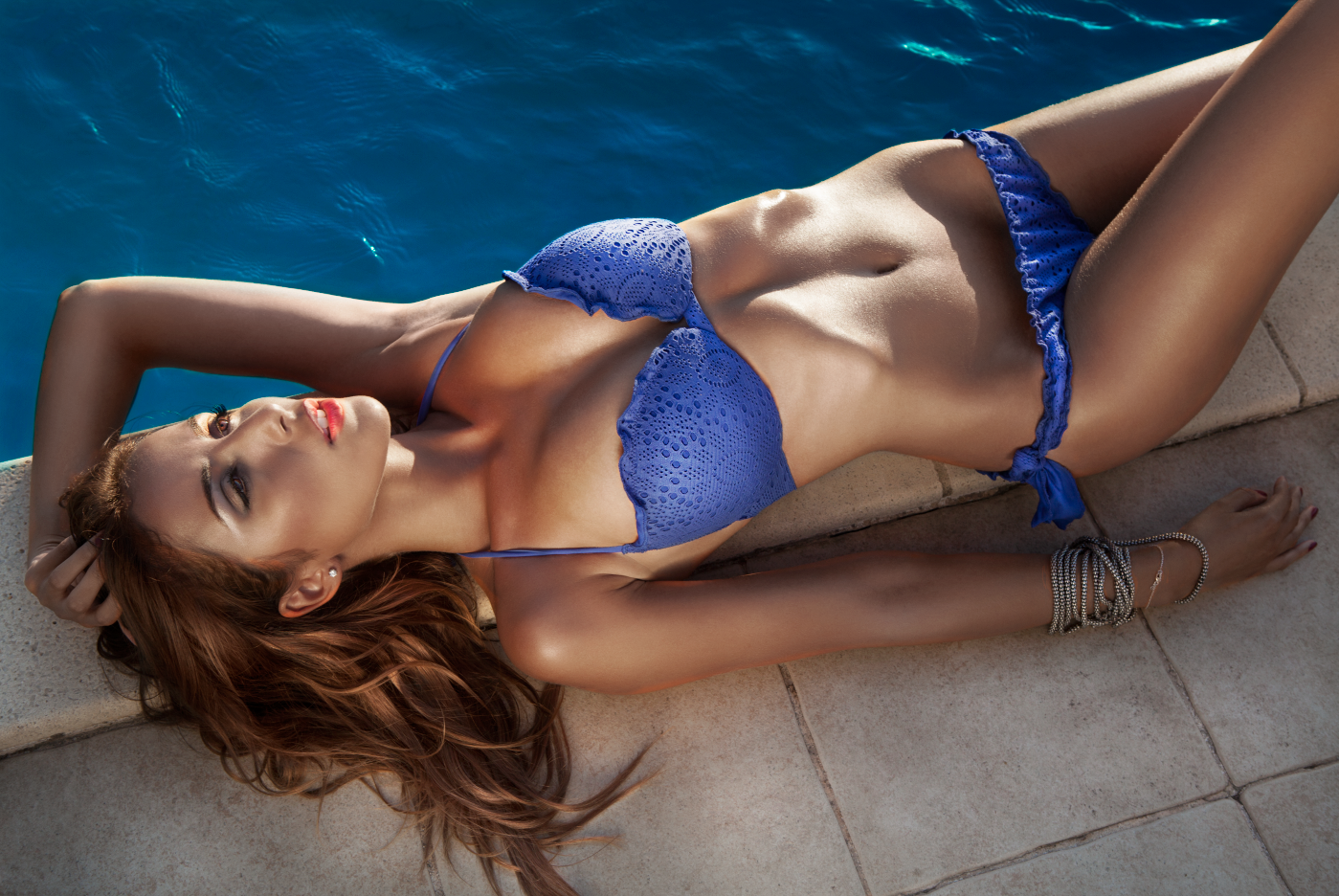 Many inexperienced retouchers would have left the file at this point and moved onto exporting, but we are not done here yet. Even though I said at the beginning that this is a skin color retouching tutorial, I cannot express how important it is to create balance in the image (within tonal range). Right now, if you look at the image above, the bottom part of the image seems very flat and it almost feels like there should be more shadows in that area, but since we used the gold reflector, it has flattened that part. Even during the shoot, we knew that this will need to be corrected later on in post. So, in order to add some balance into the image, all we have to do is introduce some shadows: 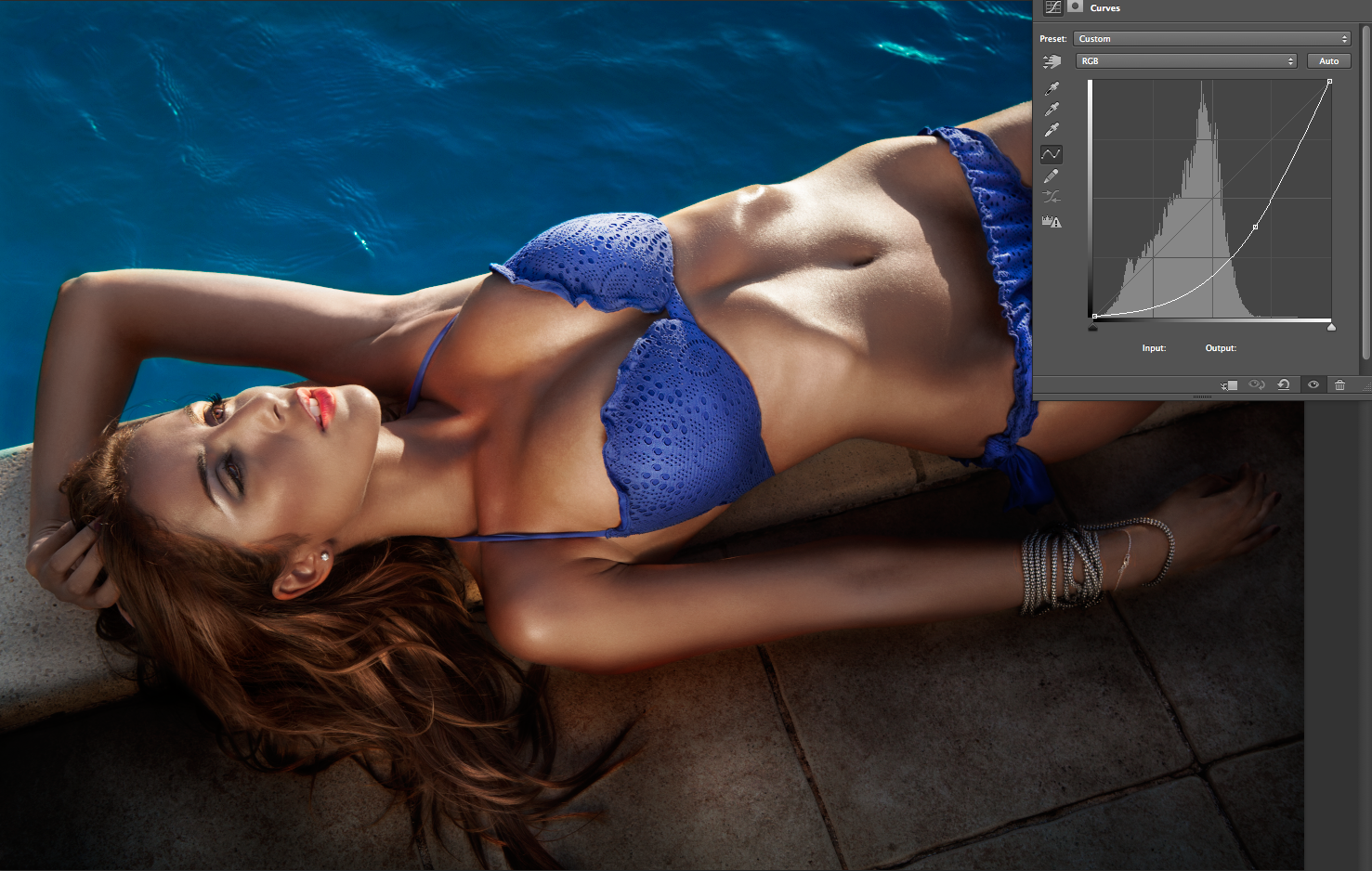 All I did here is pull the curves down in order to create more depth, next I used a mask and applied a gradient so that it nicely fades away. Look closer at the mask to see the effect: 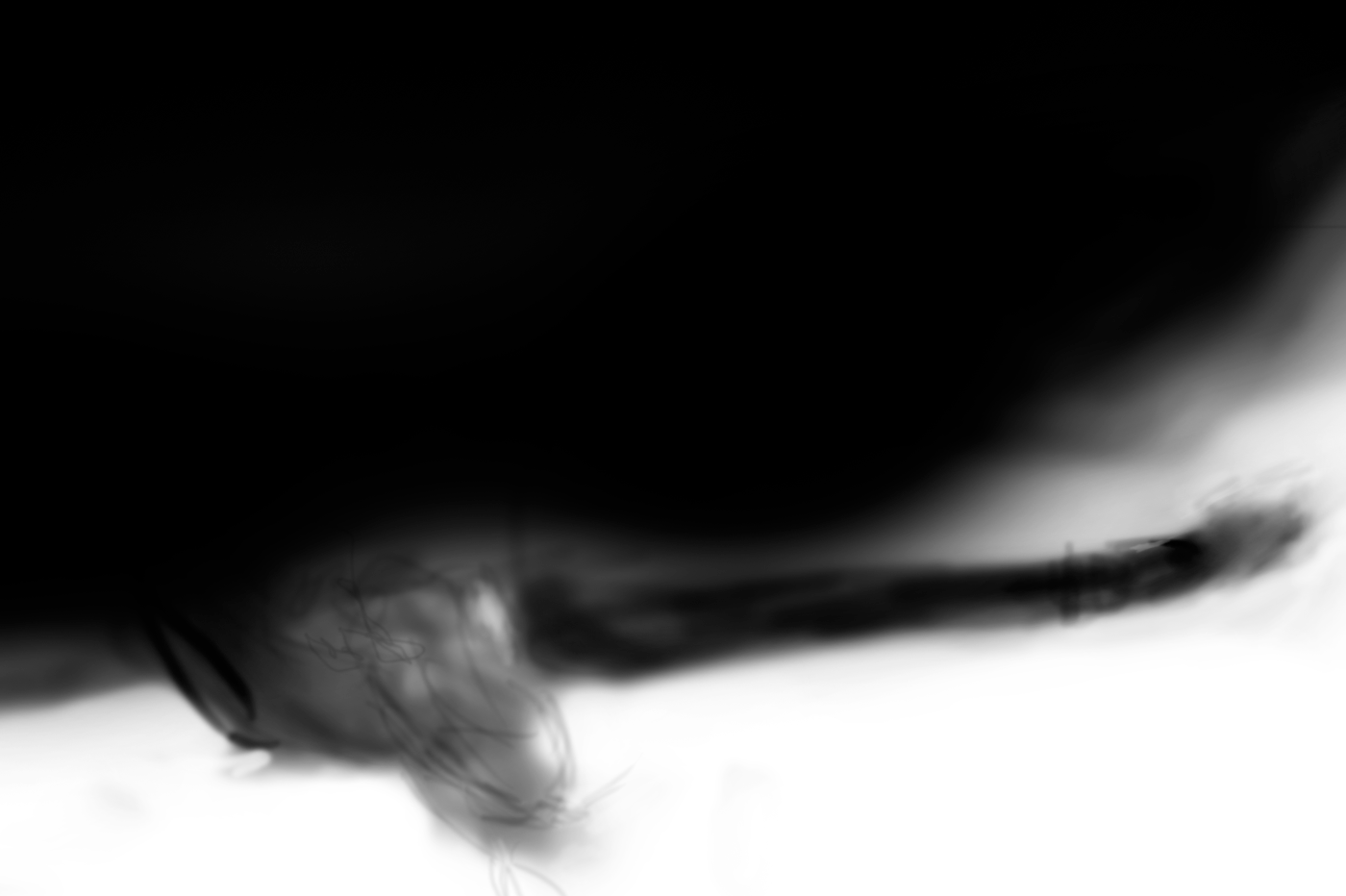 The next step is all about adding colour contrast and evening out the colour spectrum to get that nice, warm, almost summer-like skin tone. This is done with 2 different adjustments layers: Vibrance and Selective Colour. Now, it may seem odd, because we took away saturation and now we will be applying Vibrance… which with a first thought may sound like we are adding saturation back in.

Don’t be fooled though, both of these adjustments are not the same thing. Saturation increases the saturation of your standing colour. No matter what their starting point was, it could even damage your colours and completely clip them which will result in the 1980’s game graphics look.

On the other hand, Vibrance is a very smart and advanced setting – it calculates the colour depth of your colours within the image and as you are increasing the vibrance of them, it will only apply that setting to colours that will allow for it. It won’t let you damage your colours and it won’t create any unrealistic skin tones. 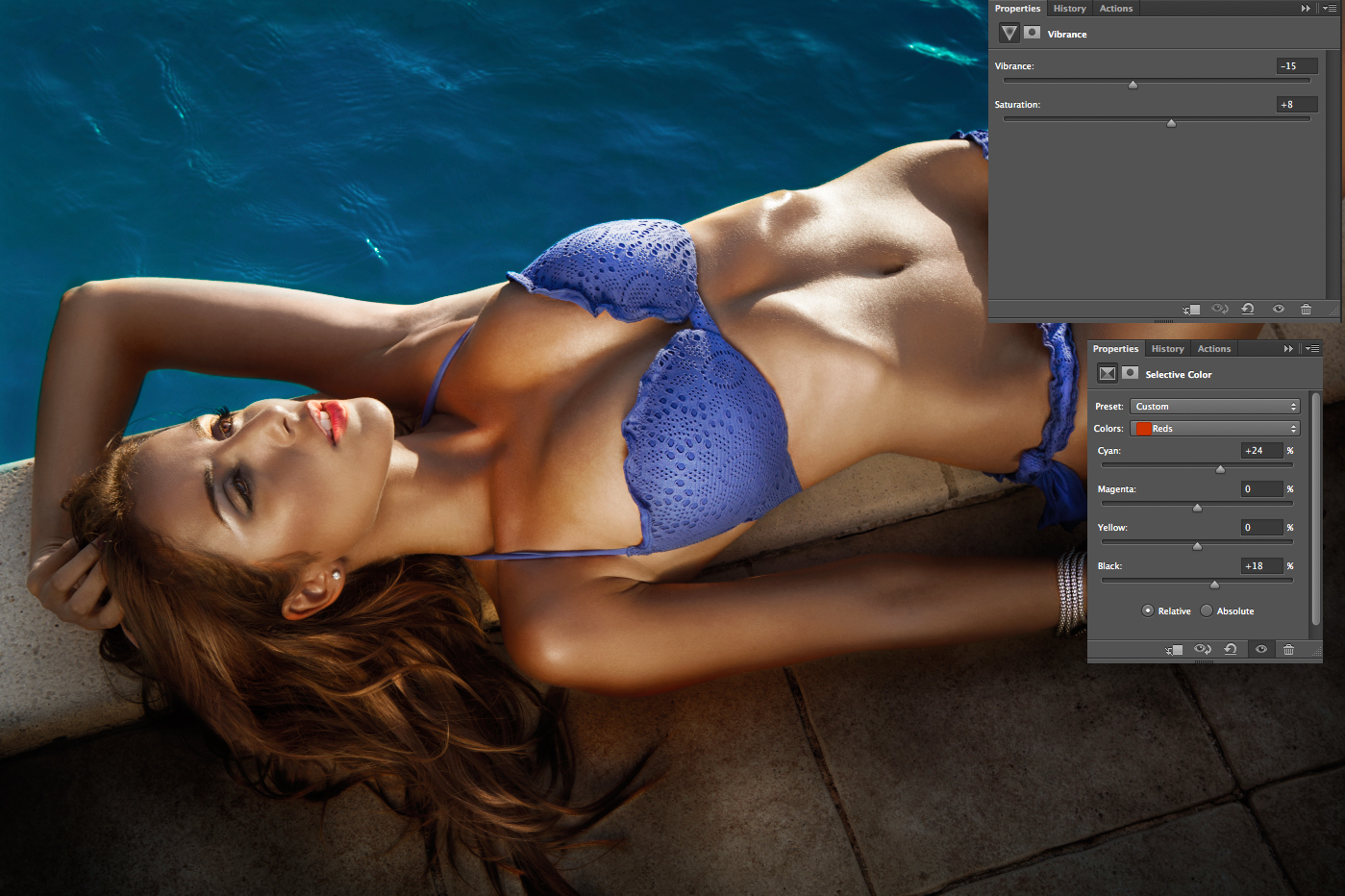 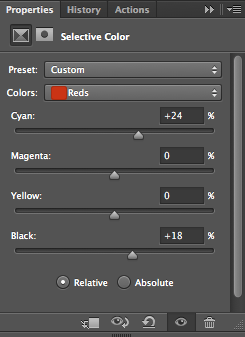 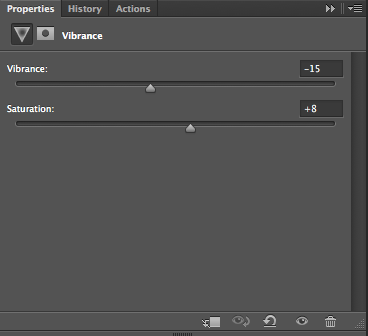 The last step is very simple, yet not that many people use it. It is essential to get coloured shadows. We are talking about Gradient Maps. Many people commonly use gradient maps to black and white images, but you can actually use it on colour images, too. All you have to do is set the blending mode to ‘Colour’ and just drop the opacity (I’ve dropped it to 25%).

You can obviously choose any sort of colour you want, but since we are retouching skin, we are after something that will fit with our image. We don’t want to choose greens or blues. On the other hand, I do advise you to experiment with them, as you can achieve some creative results and perhaps you may do something unexpected and actually come up with something interesting/outside the box. 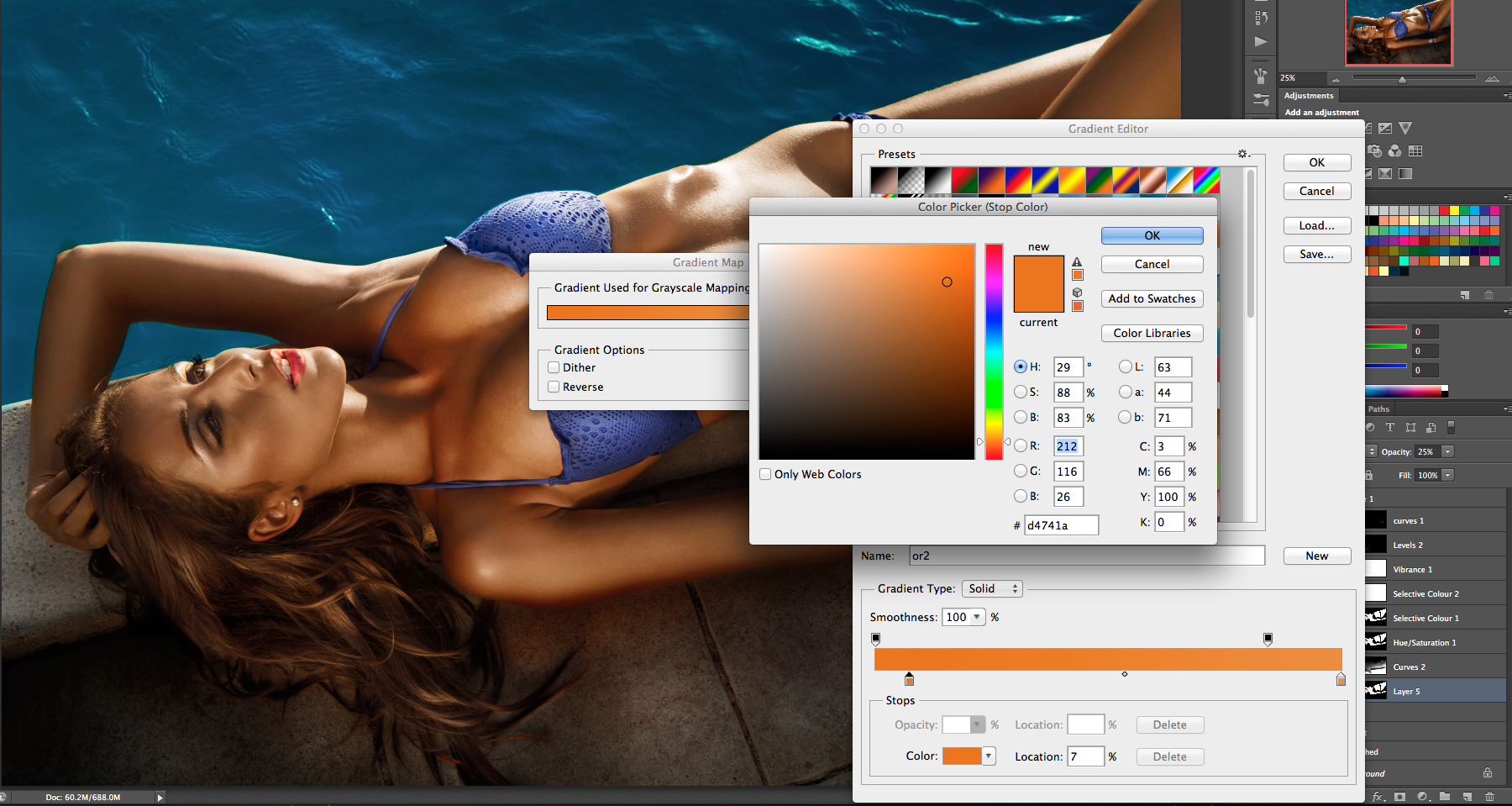 and here is the final image:

So, what did we learn? Well the fact that skin looks nothing like we want it to? Yeah, but there is more to that, it is all about making sure that there is balance. It’s a very similar principle as with sunbeds, you don’t just apply it to one side of your body and you don’t go for the darkest tone of skin straight away, you apply it several times, layer by layer to make sure you get good results. It is the exact same with your files, you cannot just darken the skin with one Curve adjustment layer, you need to use several resources in order to create a tonal balance. You need to take your time. Walk away from your monitor once in a while and come back to it, to see whether you are not over doing anything. It’s better to add later on rather than try to figure out what you overdid.

DARIUSZ SZWEDO : I was born in Poland. At the age of thirteen, I moved to the UK and am currently still living there. My journey with Photography began with an Art & Design course which lead me to digital cameras. I was simplly not that good with paints – as a matter of fact I hated it! At the same time, I started discovering Graphic Design which was based on Photoshop work. This had a huge impact on my current editing/retouching skills. At the moment, I’m getting my BA in Commercial Photography at Derby University. My website: http://www.d-sphotography.co.uk/