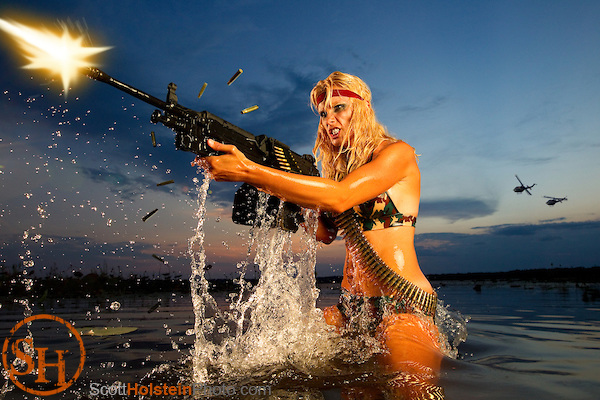 When the day-to-day business of shooting for someone else wears on our creative freedoms, it is incredibly important to feed our imaginations with personal projects. Some of us draw inspiration from fashion or nature or personal lifestyle. Others? Well, for Scott Holstein, rich inspiration was ripe in the classic 80’s action film character Rambo, but with a little twist… and so, ‘Rambabe’ was born, complete with behind-the-scenes video.

When I do a personal project, there are no client needs and no outside influences; it allows me to purely pursue my creativity.

How did you come up with the idea for the Rambabe project?

I love the original Rambo trilogy (though I haven’t watched the recent movie), and while watching it one day, I decided it would be fun to make a photo that changes it up a bit and has a beautiful, tough woman as the “one man army” instead of a sweaty dude (no offense, Stallone). This was a personal project, but they can be good marketing vehicles to show off one’s skills to potential clients. Behind-the-scenes videos show viewers how the photographer works and also helps them get a feel for the photographer’s personality, so it adds another dimension to one’s portfolio. Behind-the-scenes videos are just one more piece to the marketing puzzle. I also enjoy sharing the process of starting out with an idea and trying to make it come to fruition. I’m taking the viewer through a fluid process as it unfolds for both of us, and I want it to be both informative and entertaining.

For the Rambabe behind-the-scenes video, I did a fun little intro to set the scene for the photo shoot. While the shot itself is not necessarily mimicking any particular scene in the trilogy, the opener was a parody of the scene in “Rambo: First Blood Part II” when Rambo escapes from his captors and seeks revenge for his abandonment. The short intro required several props — the rifle replica was a total pain to get from a prop house in L.A.  Additionally, I rented the ammo belt and the old radio she calls in on.

The response to this project was mixed. Strobist’s David Hobby called it “typical male-centric cheesecake.”  Some people liked it and some didn’t, and that’s OK; that’s the risk we take when we put creative work out there. I haven’t gotten any calls that credited the Rambabe project alone for landing me a gig, but I do know it was passed around before a client decided to contact me for a gig.

The neat thing about these projects is once they are done, they live out there in the Internet and passively draw people in. I shot Rambabe awhile back, but it’s still finding new audiences for me. Every bit of exposure I get helps, because it may take a potential client seeing my name and my work several times before they remember me or choose to hire me.

What special considerations do you take when shooting in water (especially with talent that is splashing up from it in proximity to your gear)?

Are you telling me expensive electronics aren’t waterproof?! I don’t take any particular precautions when shooting in water, aside from maybe saying a quick prayer beforehand and being meticulous and attentive to what I’m doing. I do keep a towel handy to quickly remove any splashes and to keep my hands dry. I like to have a boat near me, also, for a safe place to set the camera down and have other equipment on-hand. And the gear is insured, of course.

The professional series of cameras and lenses supposedly have some weatherproofing to them so I don’t worry about a couple drops of water that may wind up on the gear. I believe in the Rambabe video there is a point where I’m checking the front of the lens for water drops from her splashing around a little bit so that it’s not affecting my images.

In Florida freshwater, I’m more concerned about what’s in the water with me than the water itself (though I felt rather safe with Rambabe). While flat, freshwater is a bit risky, I recently stood on a ladder in the breakers in the Gulf of Mexico with no water housing — that was a harrowing experience! Just don’t tell my insurance agent.

Your behind-the-scenes video is a lot of fun, the intro scene setting up the theme with humor. Can you tell me a bit about your process for pulling a team together and creating such a video?

Thanks! I had worked with most everyone on the crew before, so I knew I wanted them on this project. Carlin Trammel of Stormspeed Entertainment who did the video also did the Quagmire video for me (below), which involved wading into a gator-infested swamp at dusk – gator feeding time – so I knew I could convince him to get in the lake. I had hair/make up and a couple of assistants who doubled as gator spotters. That was the extent of the crew.

The difficult thing about doing a video like this while doing a photo shoot is that I’m juggling both at the same time. I’m not only thinking about what I need to do to get the shot, but I also thinking about what I need to say or do for the video to work. Having Carlin there to take the lead on the video at the photo shoot frees me up to concentrate on getting my shot. And, thankfully, his awesome editing makes me sound downright eloquent!

Thanks to Scott for sharing his work (and for essentially creating a female action hero… too rare a character, in my opinion)! This goes to show that indulging in personal projects is a a way to flex your creativity and keep your shooting fresh, as well as to add breadth to your portfolio for marketing to potential clients.

When was the last time you invested in your own creative pet project? Please share in the comments below!

CREDITS: All photographs by Scott Holstein are copyrighted and have been used with permission for SLR Lounge. Do not copy, modify or re-post this article or images without express permission from SLR Lounge and the artist. With roots in nonfiction and commercial video production, Megan found a passion for still photography in 2009 while traveling through Ghana. Today she shoots weddings and portraiture with an adventurous bent with her husband at Rogue Heart Media, as well as continuing her work in video production. Connect with her on Facebook or through their website.