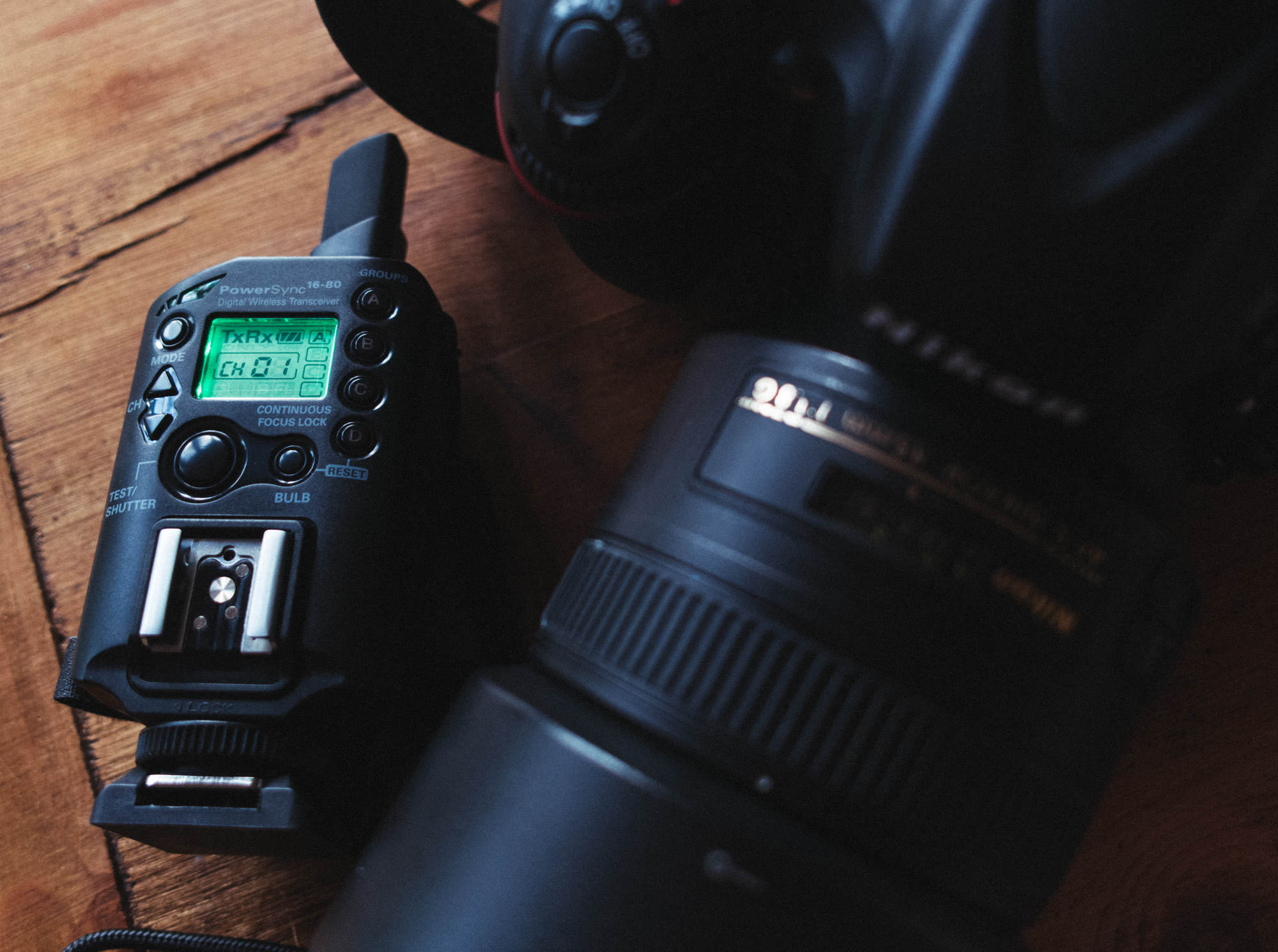 How tied and loyal are you to keystone photography brands? The Nikons, Profotos, Elinchroms, Broncolors, Pocket Wizards, and so on? I’d wager the spread of answers to this are divided not particularly by desire, but by necessity, and level of commitment. I’m sure I could make a further assessment, that as the pieces of equipment trickle down in terms of perceived importance (the camera being the most important since it’s what takes the image), so trickles down the self-brand identity. Here’s what I mean.

If you’re new to the game, you’ll look in the usual corners for the big names of cameras, though likely most people will go with the big brands since they still hold the power. But if you’re new and inexperienced and on a budget, you begin to divert, and you’ll likely start looking for ‘comparables’ when it comes to lenses, tripods, cables, and most typically In my experience, in lighting equipment. This does, of course, make sense, because lighting equipment from the small to the enormous can get obscenely expensive, and very quickly. As a new photographer or one not committed to it as a career, it seems hard to justify premiums on this stuff, even if you want the best. A working pro knows what a pro’s environment demands, and purchases accordingly, but that luxury isn’t everyone’s. But there is good news. 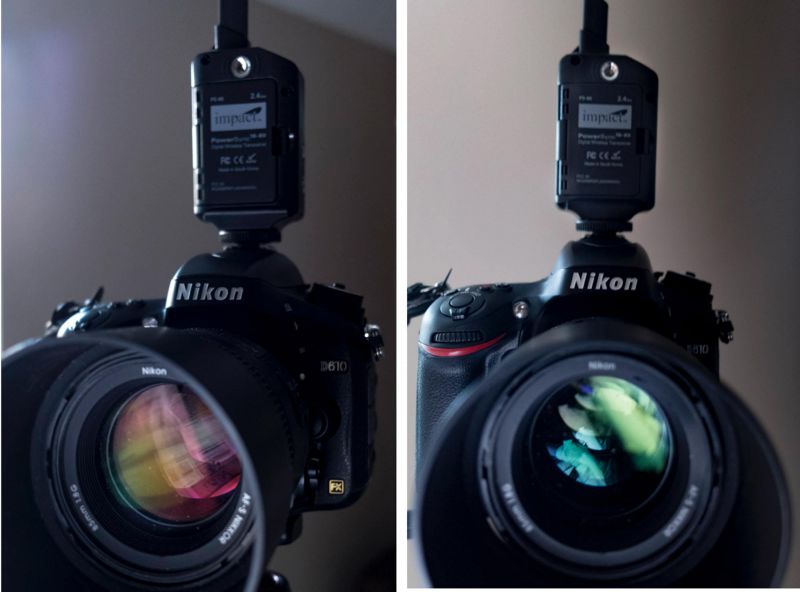 Over the past three years especially, we’ve seen an evolution of the ‘discount’ third party companies, with brands like Sigma and Tamron leading the way. Sigma, it’s fair to say now, is no longer even viewed as a third party brand to consider when what you have to consider is your wallet; they’ve managed to transform from something you merely appreciate into something you want, while still besting the bigger brands in price. We see the similar sort of thing beginning to happen elsewhere, and Impact seems to be getting in the groove.

There are mixed reviews galore about Impact equipment, and years ago many would’ve gone without, in many instances, rather than use any of their stuff.  For others, the appeal of their price point was so significant that it was irresistible. It is their price point that has been really their attention getter, but looking at the PowerSync 16-80 wireless transceivers, one begins to think that there may be something more to Impact than dollars: sense…

Well, this is what it all comes down to doesn’t it? When we speak of certain types of equipment in photography, there is usually a specific set of verbiage associated with it. That verbiage tends to be intrinsically linked to the characteristics associated with that genre of equipment, which is why even the companies that manufacture them include something about those characteristics in the name of the product.

When you search light modifiers, it is the size and shape of the modifier that’s often included, such as ‘Deep Octa 60’ or something like that; 60 for dimension and deep for design characteristic. Probably as equally noticeable are the lights themselves, as the lights/power packs will often have a number associated with them as a nod to the power of the unit. This is because, with those units, we tend to associate a primary feature as being power output. 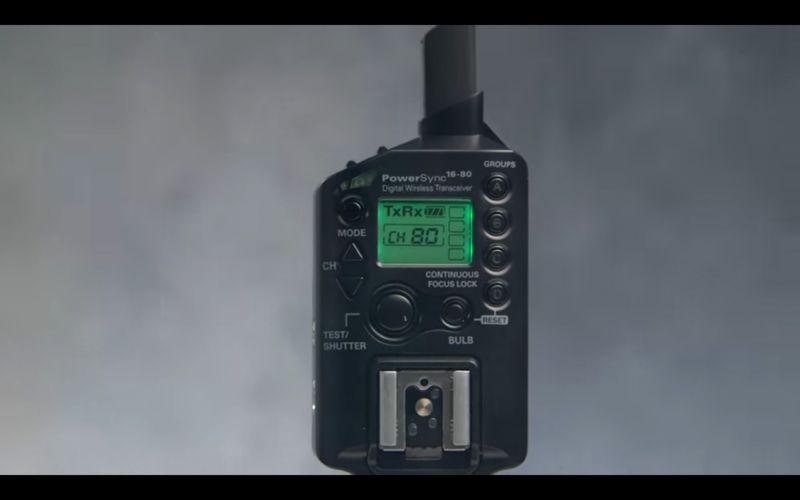 What I haven’t noticed as much is the same done for flash triggers, unlike what Impact has done for their line and specifically their PowerSync 16-80 wireless transceivers. Those figures, 16 and 80 represent the number of channels it can work with, 80 channels and 16 when engaged in backwards compatibility with the older PowerSync 16.

Having not tested the backwards compatibility, I can’t comment on the role radio interference would play with 16 channels, but I can genuinely say I’ve shot about 1400 shots with the 16-80s connected to either speed lights or strobes and have not had a single misfire. This is not something we would expect from Impact triggers some six years ago, aside from PWs. So let’s just get it out of the way now that in terms of reliability in a controlled setting, there’s nothing much the 16-80s could’ve done to be better.

Taking it out of a controlled setting and still, the same news and positive results prevail. So for triggering your light, this can do the job, and without a hiccup.   *Worth noting that I didn’t really push the flash sync speed past the regulatory standard of 1/200 more than about ten times using Nikon’s Auto FP. It’s not a feature I really ever need to use, but it handled it with aplomb.

But of course, there’s more to a trigger set than doing the absolute basics, and it’s very obvious that when creating the 16-80, Impact had it in mind to create something extremely all-encompassing as an answer to common and uncommon requests, and justify a price point higher than normal for the company. We’ll get into more of that later in Features and Value, but I can address the other standout feature here, and that’s the ability to remotely trigger your camera. 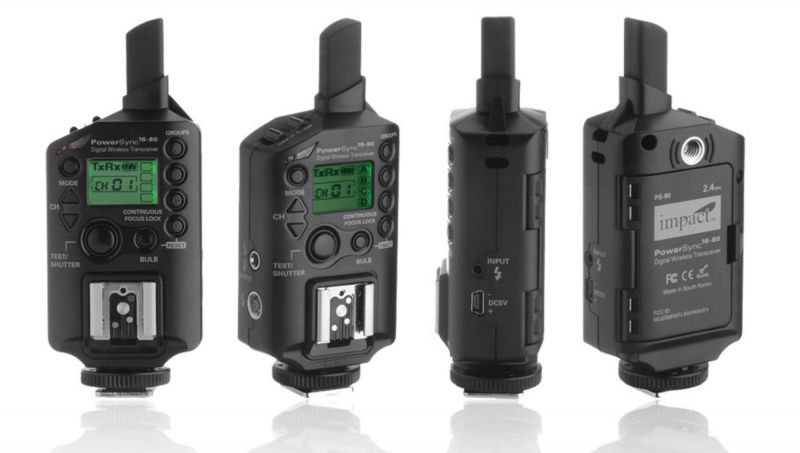 Using the supplied cable, which you will likely have to specify upon purchase so B&H will include the right one for you, you can attach one transceiver to the camera, hold another, and use it as a remote release for your shutter. The button actually works just as your cameras would with two stage depression to ready and fire. Each stage is well defined in feel. There’s not much you can really do with the shutter release option other than taking the image, as you can’t really control shutter speed unless you’re in bulb mode – where of course you’d press once to open and then again to close. It will also work with your camera’s system to focus in single and continuous modes.

The obvious application for this is for landscape, wildlife, and astro-shooters who treat their cameras like lepers and avoid touching them when at all possible. But for portrait shooters and wedding shooters it has applications also, particularly how it assists in engaging with the subject. I find it challenging at times to get a feel for my subject at a deep level and get them to emote what I want when I’m not holding eye contact, so I often break away from the camera to look at them, evoke the emotion, and quickly jump back in. 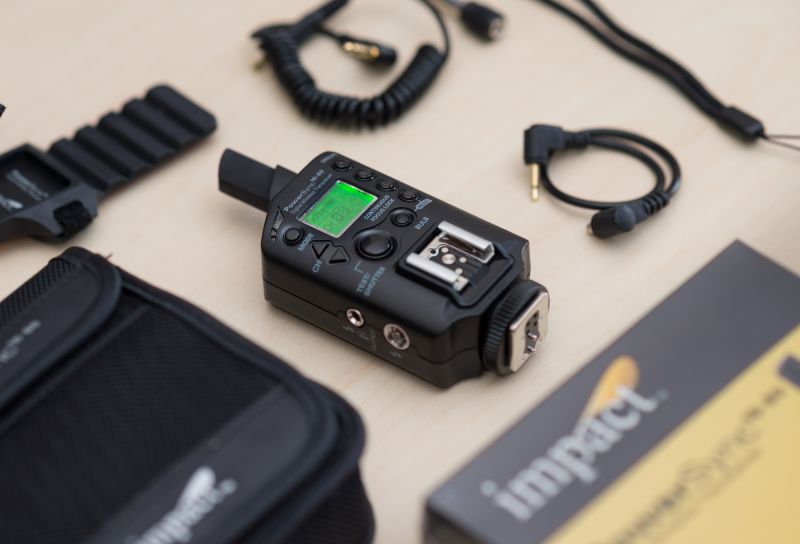 The one other feature that stands out does so because it’s missing. Some are really going to wish Impact had engineered these triggers to offer actual strobe/light control such as the Bolt system, which we’ve previously reviewed here. I don’t really give a stuff, and if you’re a studio shooter, you’re likely used to adjusting the strobe power packs anyway, but for those on the move, it is surely going to matter. Still, a sin of omission in this sense is better than a flat-out fault.

Well, the design doesn’t leave a lot to critique, given the much more modern look these have compared to the last variants. That said, they don’t feel as good; they feel a bit cheap actually. They’re not terrible, but you don’t sort of have the faith in them from feel; not like you’ll get from PWs or the older PowerSyncs. However, whatever lack of confidence their feel promotes is off base, as evidenced from how well they actually perform. And  the overall shape makes them look attractive if the details do not. 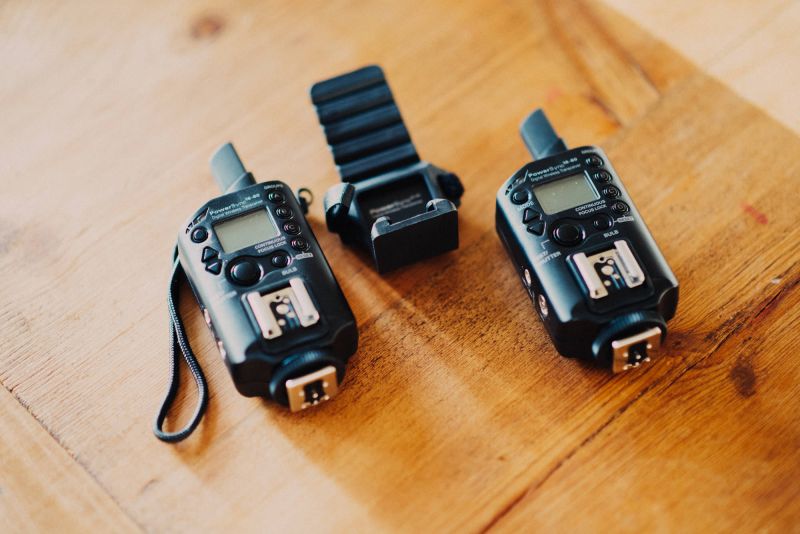 There’s a myriad of buttons and ports to be seen all over, and that may seem a bit daunting or intimidating, especially if you’re used to the absolute minimalism of other brands. But I’ll tell you what, having all separate buttons makes for a learning curve that’s almost vertical because it’s all so self-explanatory, and the lack of menus is actually refreshing.

One of the features I absolutely adore, and I can’t stress that enough, is the fastening device that allows the trigger to be attached with ease to a stand, or anything at all. It’s a little seat for the transceiver with a sticky back facing outwards that secures onto a wall, power pack, or whatever, and it also has a velcro strap for wrapping around a stand. If you’ve ever used these types of triggers, you know that securing them is often a bit awkward and they are often left dangling by a lanyard or taped up, but this is so much cleaner. I love it. 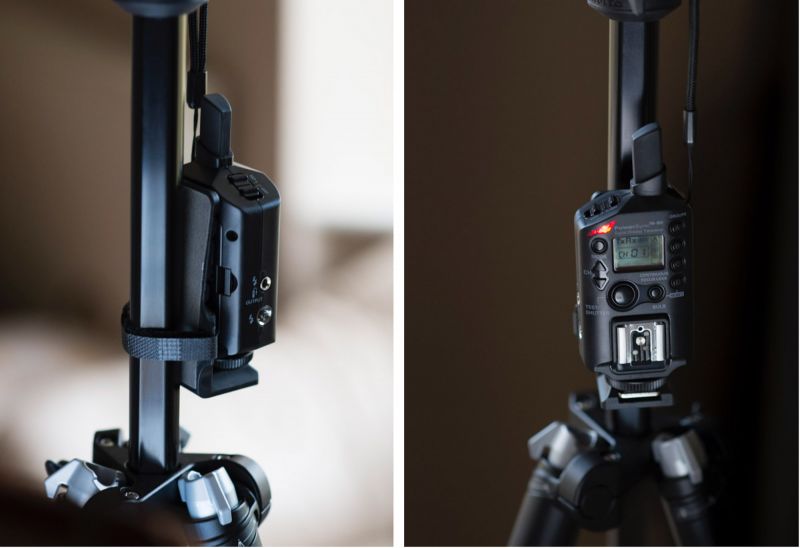 The only design flaw is the battery door. I said it in the initial review, and now having used these triggers on two continents having to switch out batteries and move around, I stand by my initial assessment that the battery doors feel flimsy. I was entirely concerned each time I used these that should I drop them from even a height of a foot on some European cobbled street, that the battery door would just pop off. Now, I haven’t dropped it (yet), likely because I’ve been so conscious of it. The thing is I like my gear to take a beating, so I don’t have to waste time babying them, and I didn’t feel I could do that with these.

Carrying over a little from the last section, quality is intertwined with design in some respects. In terms of physical presence, build materials and feel, the 16-80 aren’t going to win any awards. That said, nothing broke and all the buttons still feel spanking new.   Not much else to be said here, as it’s all plastic, spare the ports.

So would you be getting much for your money if you bought them? Yes. That’s the simple answer. Granted, the price point isn’t the cheapest as it encroaches PWIII territory, and that’s a bit of a paradox really, but I feel very secure in saying that what you’re getting for what you’re paying is dollar-for-shot, money well spent. 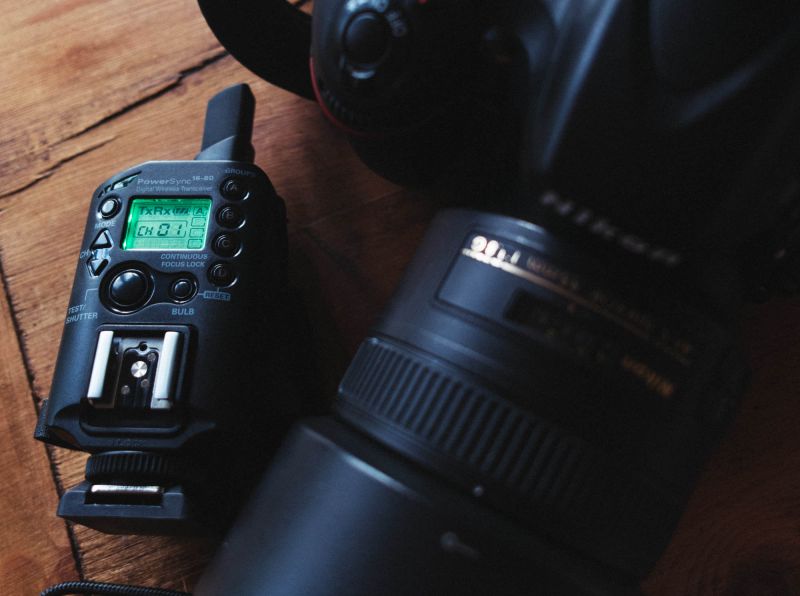 Of course, there are many of you out there who will argue you can get a pair on Yongnuo 605s for the lint in your pocket, or YN-622s for half the price of these 16-80s. Maybe true, and perhaps your experience has been good, but my trust does not lay with those brands. Yes, Yongnuo makes flashes we love, but it’s all based on price point really instead of capability, and reliability has been hit and miss with them. I actually have full faith in these Impact transceivers – not as much as in PWs, but more than most. And that, well, that counts for something called peace of mind, which to me, is worth more than these cost.

[REWIND: HIGHLIGHTS VS. WHITES | WHAT’S THE DIFFERENCE & WHEN TO USE WHICH?]

If you’re watching your budget, and looking to maximize its purchasing power, that means PWs may not be your best choice, even if they are the best triggers. These strike that lovely balance in terms of performance and cost, and given my experience with them, I don’t hesitate in recommending them, which is something I can’t do with the others.