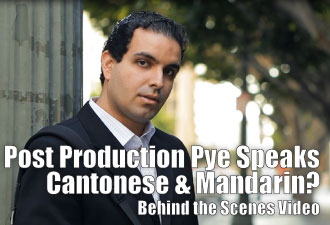 Believe me, I know it’s weird, but this Persian American speaks Cantonese and Mandarin Chinese (along with a couple other Chinese dialects) and pretty much no Farsi (Iranian). Yeah, you don’t really understand, I don’t really understand, don’t worry, we are all in the same boat. All I can say is I have always enjoyed studying Chinese languages… yeah… so, moving on…

While working on the UNDFIND Kickstarter project, we had the idea of doing a commercial in Chinese. I mean, after all, it would be great if TheOneBag became a hit in China right?

Well, I thought of this idea, why not do a commercial about appearances and how they can be deceiving. You will have to watch the commercial to see the rest, but for those of you that speak Chinese, well, you should get a kick out of it.

Don’t worry, for those that don’t speak, it does have subtitles, and laughing at me should still be equally enjoyable ;)

I am afraid to say this, but feel free to comment and tell us what you think below. Enjoy!

Behind the scenes video (Mandarin and Cantonese w/ English Subtitles)