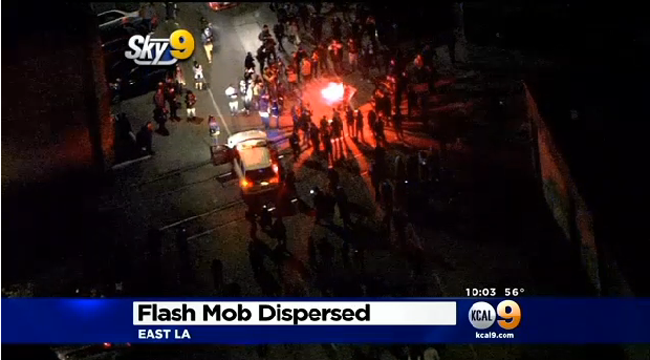 Police Shut Down Photo Walk Mistaking It For A Rave

When hundreds people gather on the streets of East Los Angeles and light stuff on fire, it’s either an angry protest or people are celebrating a Lakers championship victory (well, we definitely know it’s not the latter recently). Except this time the mayhem was caused by a group of photographers on a photo walk.

A photo walk is an event where photographers get together and shoot (with cameras, not guns – must clarify since we are talking about East LA), meet other photographers and hang out. There are photo walks organized all over the world, but this weekend one got a bit out of hand.

FlaskMob, which is a group that gets together monthly in San Francisco and Los Angeles, organized what would be “potentially the largest meet up that LA has ever seen,” according to their Instagram account. FlaskMob uses social media to spread the word about their events which has grown to the hundreds showing up each event.

In an interview before Saturday’s event on The Hundreds, co-founder Evan Thompson spoke about how they keep things under control. “We had some kids tagging and that’s when we sat down and were like, ‘How far can we take this without having permits and not getting in trouble?’ Nobody wants to put money into it, we’re all doing our thing and we don’t have money to do it legally…once we saw the amount of heavy drinking and graffiti, that’s what got us into a potentially bad situation. But since then, we’ve slowed down a bit. We’ve made time to say “hello” and get to know everyone—they’ve become our friends. Now every time that we meet, we have hundreds of people that we know and they’re helping us make sure it stays safe and not too crazy.”

Police mistook this crazy event for a group of ravers when the photographers began lighting steel wool spinners, fireworks and smoke bombs. Added the fact that the event had a DJ and alcohol and you have all the elements of a rave – with the addition of expensive camera gear.

Below is a video from the event by event attendee, Nick Brazinsky, which shows a lively atmosphere similar to a rave. According to a commenter on Reddit, as well as the FlaskMob’s twitter site, the group ran into some trouble earlier that evening when the 7th street bridge was blocked and barricaded, the group was corralled into an alley. The commenter also claims that “an officer pulled out a shotgun, cocked it, and pointed it at the crowd.”

Police sent helicopters and a large team out to find that the crowd was only a group of amateur and professional photographers looking to hang out and take photographs. Police said the crowd was respectful and began to disperse on their own when they arrived. No arrests were made and no property was damaged.

Safe to say that if you’re ever organizing a large event in the community, it would be wise to get a permit, make the city aware of your of your plans and get permission to light stuff on fire. But of course, many photographers run by the motto, “Ask for forgiveness and not permission,” which will run you the chance of ending up all over the news.