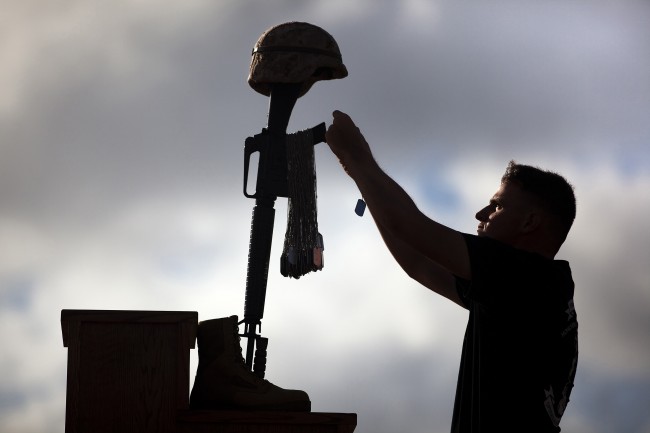 Happy Fourth of July! 238 years ago, the Declaration of Independence was signed by our Founding Fathers and today, we in America celebrate the birth of this nation with a long weekend of BBQ and beach time surrounded by family and friends. But before you begin the festivities, please take a moment to remember those that are serving our country  so that we may continue to enjoy the freedoms that we have in this great nation.

Five and a half years ago, Sgt. Reece Lodder joined the U.S. Marine Corps and was assigned to be a combat correspondent. Sgt. Lodder was kind enough to share the stories behind some of his favorite images and give us a glimpse of what life is like as a photographer in the Marines.

While in Afghanistan in 2012, Sgt. Lodder took the following image while helping clear houses of insurgent activity. The photo titled, “Let Sleeping Dogs Lie,” won the Photo of the Year in the Corps Top Shots contest. The image is also one very memorable moment in Sgt. Lodder’s career. “I had the opportunity to capture a photo of one of our Marines’ bomb-sniffing dogs sleeping nestled between two dusty, tired infantrymen during a combat operation in Afghanistan. The humanity of the moment was surreal and I’m fortunate to have been there to capture it.” 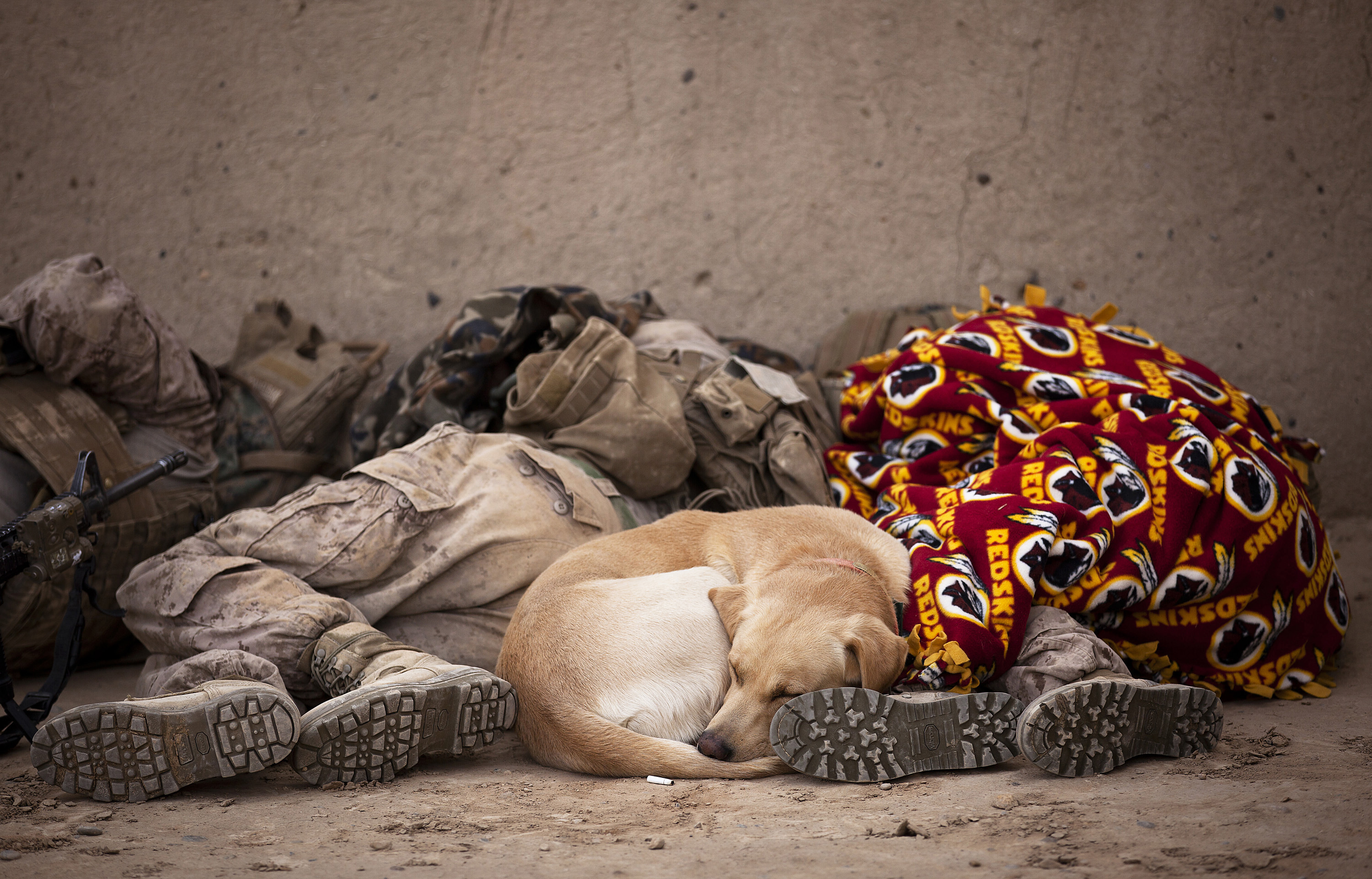 Sgt. Lodder shares some of his favorite images and the stories behind them:

On a Feb. 8 security patrol with Afghan National Army soldiers in Helmand province’s Garmsir district, Hatley and Blue found a 40-lb. IED in a canal only moments before a dozen more men were to cross it. “My dog Blue is pretty much like another Marine, I guess,” Hatley said. “He doesn’t know he’s doing it, but he’s protecting all of us. If I have him on a patrol and there’s an IED that could hurt us, I know he’ll find it.”

Sgt. Lodder is currently stationed at the Marine Corps Recruiting Station in Seattle, having been transferred from the Marine Corps Base Hawaii in Oahu. As a combat correspondent, he has seen some pretty intense and horrific things in his career. In Afghanistan, he once had to capture the aftermath of a suicide bombing, but the photo assignment that has affected him the most was the first time he photographed a memorial service to honor Marines that were killed in Afghanistan. “While photographing these ceremonies, you wrestle with a fine line between these capturing moments in time well, and with respecting the fallen, their grieving family members and friends.” 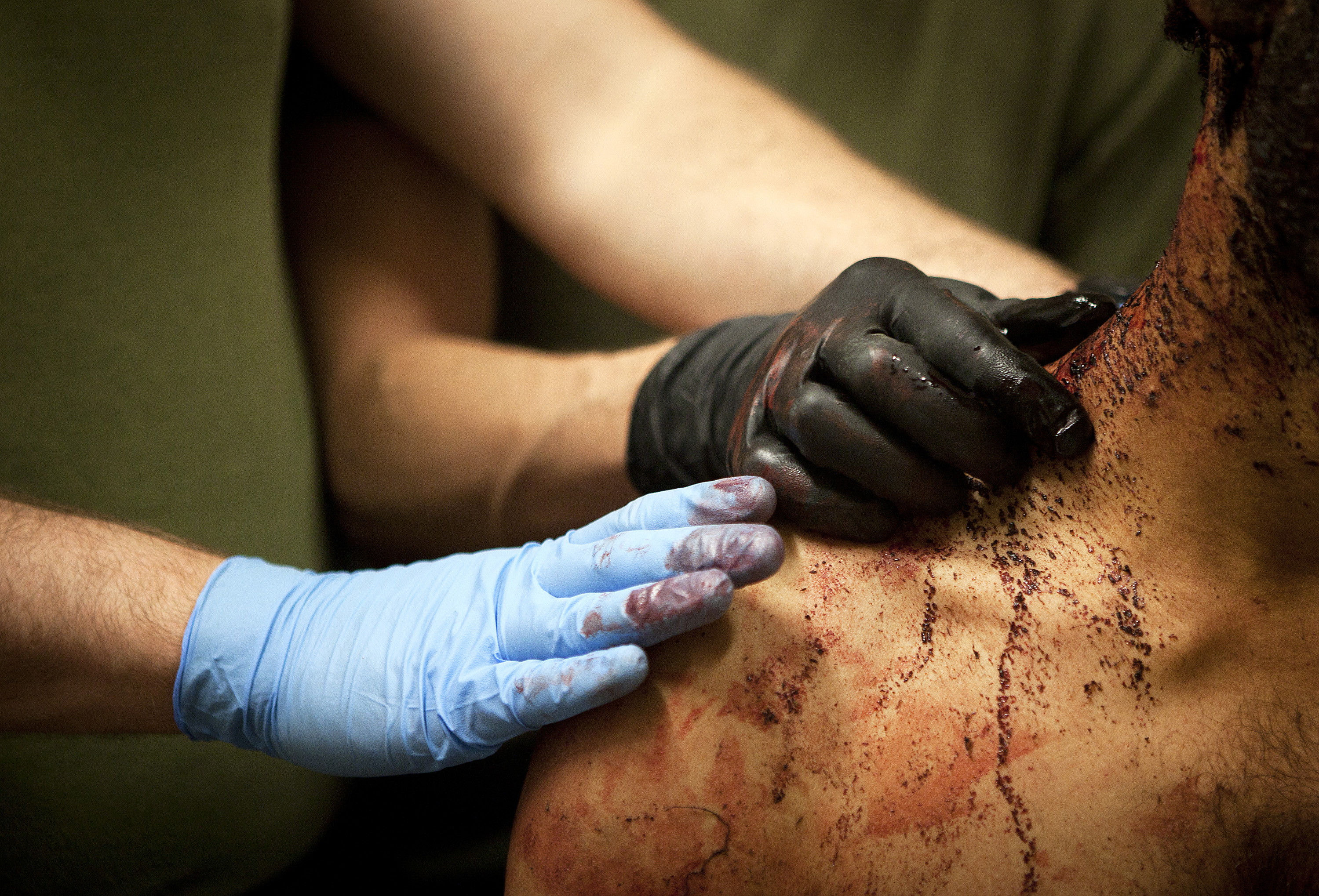 At the time I had the opportunity to make [the above] photo, I had been deployed in Afghanistan for six months with the Hawaii-based infantrymen of 3rd Battalion, 3rd Marine Regiment. One night, we learned a suicide bomber had stepped into an Afghan police station and blown himself up. Called in to take photos of our Navy corpsmen’s casualty care, I saw one particular moment that felt so powerful yet surreal, like I was looking into the story from an outside perspective. While tending to an Afghan casualty, the corpsmen placed reassuring hands on his shoulder. I loved the composition and contrasting colors — their green shirts, the different colored gloves set against his bloodied shoulder.

I wanted to be sensitive to the victim so I framed the photo more tightly in on his shoulder, instead of including his face. The most important part of the photo, which drew me to the moment, was the corpsmen’s posture. Their calm, reassuring hands show the care and concern they had for their patient. In their quiet, respectful care of these men, the corpsmen demonstrated a character of devotion and epitomized the honor, courage and commitment characteristic of the Navy and Marine Corps’s storied values.

Having never picked up a camera before becoming a Marine, Sgt. Lodder now shoots with a Canon 5D Mark II, Canon 16-35mm f/2.8, Canon EF 70-200mm f/2.8 and a Canon 580 EXII flash. One important lesson he has learned in the five and a half years as a photographer is to accept criticism. “Without it, you will not grow as a photographer. Allowing other photographers to look at your work and critique it heavily enables you to begin breaking your emotional attachment to your photos, and to self-critique the way in which you capture these moments both during and after you make your photos.”

[REWIND: LIFE AS A WAR AND CONFLICT PHOTOGRAPHER IN THE U.S. AIR FORCE] 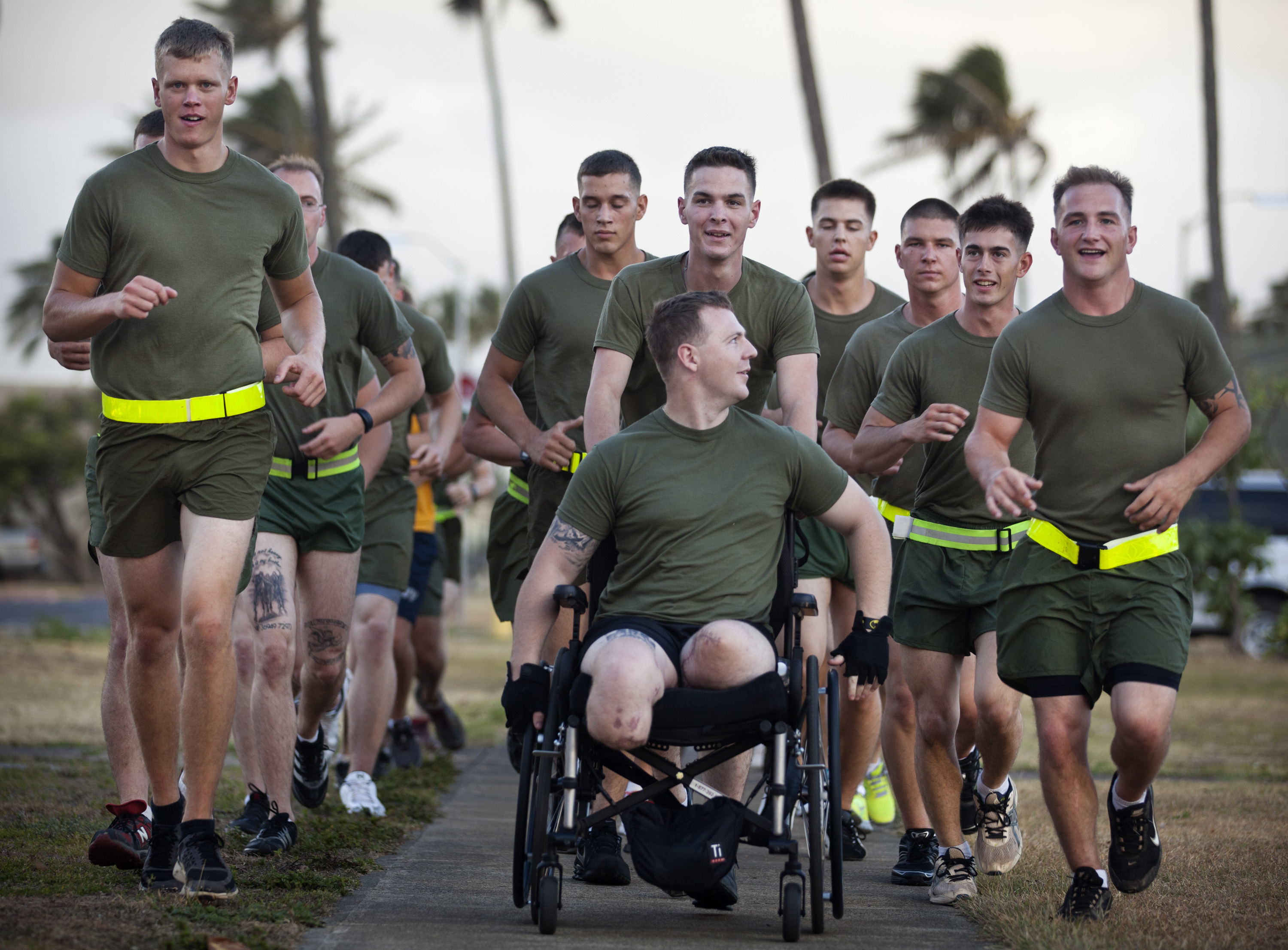 On May 29, only a week after returning from a deployment to Afghanistan with the Hawaii-based infantrymen of 3rd Battalion, 3rd Marine Regiment, I was afforded the opportunity to join in a motivational run honoring the life and sacrifice of Cpl. Garrett Carnes. The affable 22-year-old infantry squad leader lost both of his legs in an improvised explosive device attack in Helmand province, Feb. 19. Less than two months before, I had been on patrol with him during Operation Sandman in Helmand’s Safar Bazaar. He was sturdy, proficient, well liked and respected by his subordinates, peers and superiors alike — the quintessential “grunt.”

After Cpl. Carnes was hit, we finished the remaining three months of our deployment. His treatment brought him from Afghanistan to Maryland. We were very thankful he made it home. By May 20, most of our battalion had arrived back in Hawaii. In nothing short of a miracle, Cpl. Carnes was there to welcome his brothers home from their deployment, walking out onto the flightline alongside his wife using prosthetics and a cane. To date, he is one of the fastest-recovering double amputees wounded in Afghanistan or Iraq. While running alongside the formation of India Company Marines and sailors during the motivational run shortly after, I witnessed a deep camaraderie between the men, one forged through challenge and triumph.

I love [the] photo [above] in particular because it captured the Marine’s indomitable character, unchanged, and the deep brotherhood he shared with his fellow Marines. Though Cpl. Carnes’ life forever changed when he lost his legs, the radical physical alteration never dampened his warrior spirit. The enemy tried to break his body but they couldn’t touch his courage and resolve. With the support of his wife and family, his country and his brothers-in-arms, Cpl. Garrett Carnes is triumphant. 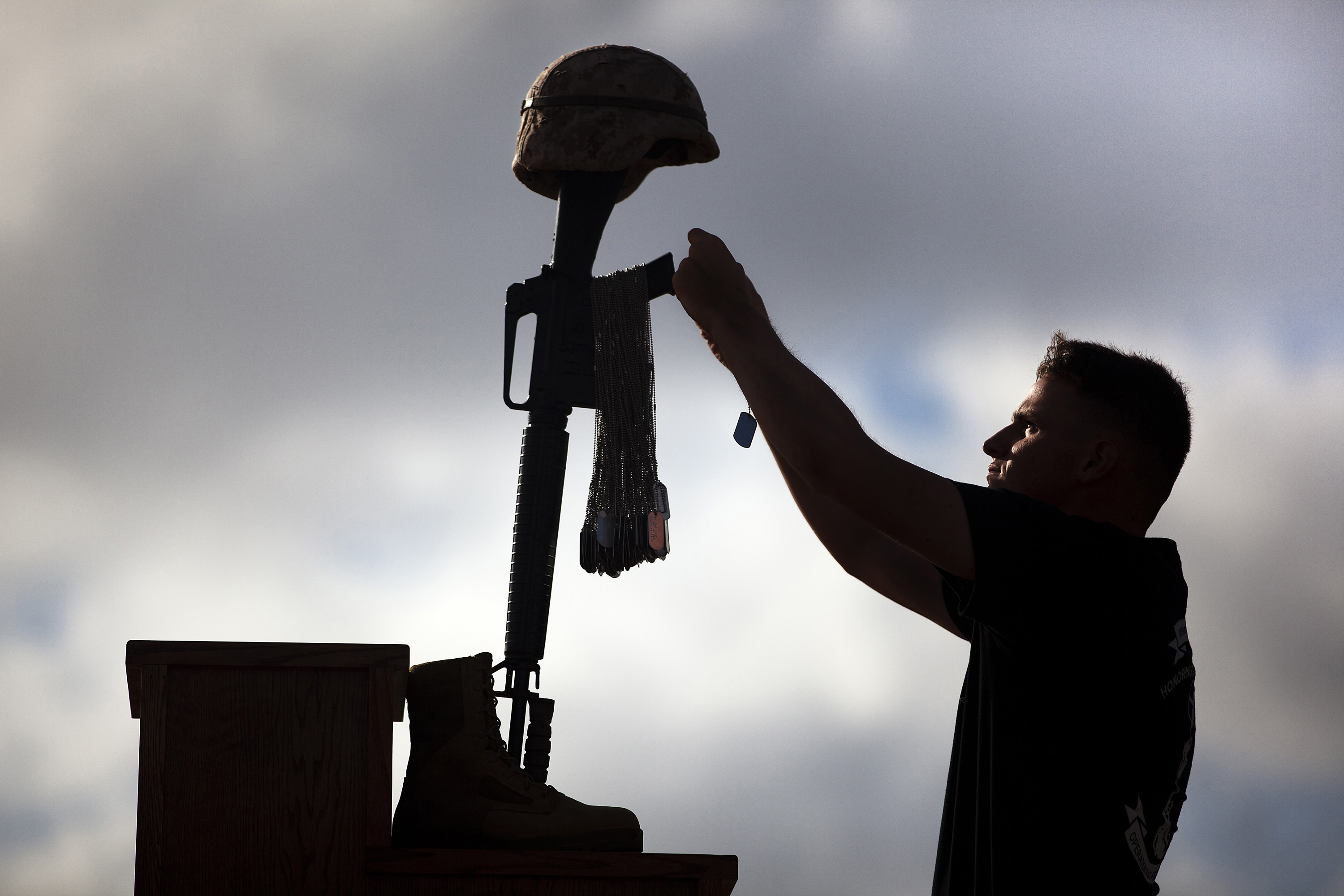 Two weeks after returning from a deployment to Afghanistan in May, my battalion — 3rd Battalion, 3rd Marine Regiment — joined with its sister infantry battalions from 3rd Marines to conduct our annual Fallen Heroes Run. The run honored 116 Marines and sailors who lost their lives while serving with 3rd Marines in Iraq and Afghanistan between 2004 and 2012. After we completed the run and fell into formation in front of a lone battlefield cross, Marines began running up to the memorial one by one to render their honors. The moment I captured struck me in a very powerful way.

The battlefield cross, the symbol of selfless sacrifice, was present but nearly silhouetted, immediately drawing the viewer to Lance Cpl. Kyle Niro’s (the pictured Marine) expression and enabling a deeper, intimate connection to him in the moment. In only a few seconds, this hardened Marine scout sniper delicately displayed honor and reverence for the sacrifice his fellow Marine made. Though Pfc. Heath D. Warner (the fallen Marine represented by the dog tag) lost his life even before Niro became a Marine, Niro’s humble expression signaled the fallen Marine’s sacrifice hadn’t been forgotten. Even separated by death, Niro’s devotion to Warner is reflective of commitment borne in both of their identities as Marines.

Sgt. Lodder tells us the legacy he wants to leave behind as a photographer in the military: “The legacy behind the images I’ve been fortunate to capture isn’t mine to claim. This legacy, and that of each of my fellow Marine photographers, will be that our images remain in the public eye as proof of the sacrifices our Marines and sailors made to defend our Nation.”

We want to thank Sgt. Reece Lodder for taking the time to share with us, and for his service. To see more of his images, click HERE.

Are Print Portfolios Making a Comeback? A Chat With Commercial Photographer Erik Almas