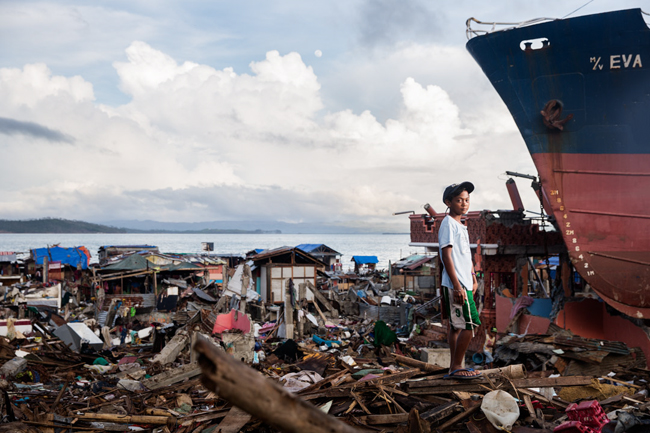 It’s been several months since a category 5 hurricane tore through the Philippines, ravaging the island and devastating cities, killing thousands and displacing thousands more. While watching the coverage on the news, photographer Sasha Leahovcenco posted his first thought on his Facebook page:

The next morning, he received an email from Preston, a Southern California photographer who was also planning a trip to the Philippines and invited Sasha along. They weren’t able to coordinate dates, but Sasha ended up flying out a week later with his two friends, Dennis and Avel, cinematographers of The Film House.

With no agenda, but to help in any way they could, the three flew out and started touring the areas hardest hit. Their mission was simple, “to document the aftermath of the tragedy, and share the story with you in hopes that someone out there would like to join and help those less privileged people in Philippines.”

Watch the Video “Signal No. 5”

Those unaffected have moved on with their daily lives, people like you and I, who still have clean water to drink, our families safe under a warm roof and food to eat, but there are still thousands halfway across the world rebuilding their homes, their lives and mourning.

I lost my wife, my son, my mother-in-law, and the helper of my mother-in-law. It’s because of the typhoon surge, which I did not understand about. If the government had just told me about the tidal wave or what they call tsunami, we would have moved from our place, but nobody informed us… I miss my family. I’m so sorry.

In about a week, the team will be going back to the Philippines to help the people rebuild, giving them tools, generators and basic necessities as food and water.

The team has brought the message to you, says Sasha,

now it’s up to you to decide if you want to join the cause. Now I am asking you to join me in this and help those that are helpless, broken and hurting…

Sasha and his team are asking for donations, every penny will go directly to the people in need. If you wish to help, click HERE.

CREDITS: All photographs by Sasha Leahovcenco are copyrighted and have been used with permission for SLR Lounge. Do not copy, modify or re-post this article or images without express permission from SLR Lounge and the artist.

Nikon Announces It Will Fix ALL D600 Bodies, Regardless of Warranty Status