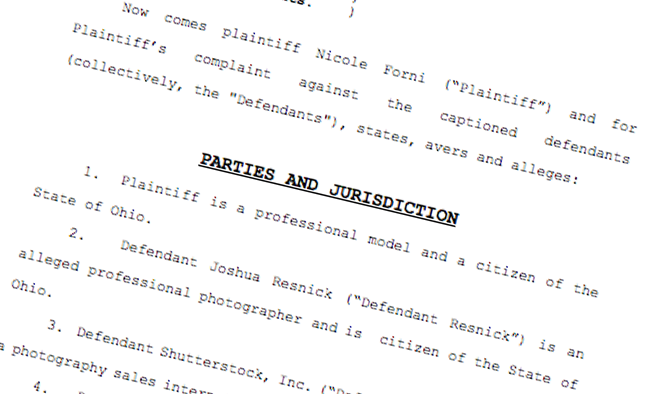 Joshua Resnick is now speaking out and telling his side of the story. Resnick says that he paid the model and had her sign a model release and that he told her and her agent that the images were going to be sold through stock agencies, such as Shutterstock. He claims that the images were “misused” or “outright stolen” and that the agency he sold the images to did not allow pornographic/defamatory use of said images via their terms of service.

Forni is claiming that the shoot was a TFP (Trade for Portfolio) and that the agreement that the images not be used “directly or indirectly, in any adult-oriented,pornographic, or obscene manner,” was made orally and not in the universal model release.

Now, it is a he said/she said case that will be decided in the Manhattan federal court. Joshua Resnick has now set up a Go Fund Me campaign to raise money for his legal defense.

Sadly, in today’s ‘click and save as’ society, image misuse is a daily occurrence. As a photographer you have to do your best to protect yourself – in writing – and be sure that the contract/model releases are very specific and detailed. Also make sure that if you are selling your images to a third party, you’ve read through their terms of service carefully. There isn’t much you can do to protect yourself from the images being misused or stolen, but the more that you can cover yourself in writing, the better, in case you ever find yourself in a situation such as this one.

[REWIND: REVIEW: WHY EVERY PHOTOGRAPHER SHOULD USE CONTRACTS | THE LAW TOG PORTRAIT BUNDLE]

We have a basic model release form to get you started, but your best bet is to make sure you have solid contracts for your shoots and also consult a lawyer who specializes in copyright law to make sure all your bases are covered in your documents. This is an unfortunate case for all parties involved and it will be interesting to see the outcome of this lawsuit and how it may set a precedence for model/photographer working relationships in the future.