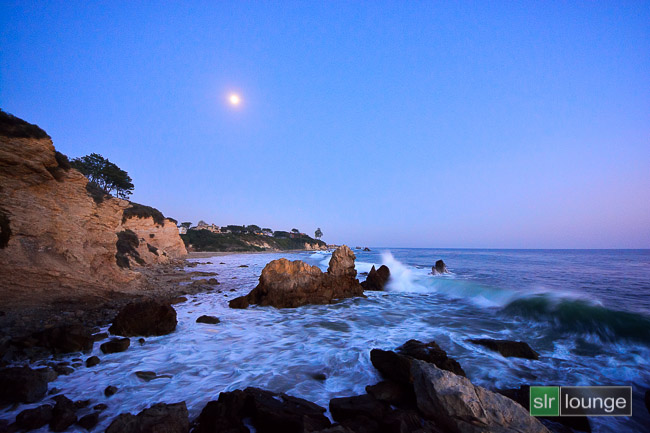 Moonlight on Crashing Waves – How We Shot It

A good alternate title for this post might be, “why did I shoot a landscape photo at ISO 1600?”  In fact, that is a very good question to ask!  Allow me to explain…

Okay so, why on earth did I shoot such a beautiful landscape at ISO 1600 and with my lens wide open?  Any landscape photographer worth their salt stays at f/8 or f/11 and ISO 100 all day long, right?  Not necessarily.

When you get your first tripod, it is amazing to go out to a beach, lake, or river and bust out a 30 sec. exposure so that the water is incredibly silky smooth.  Of course some scenes are always great at 30 seconds, and in this situation I did of course have some long-exposure fun… (15 sec @ f/11 & ISO 100) 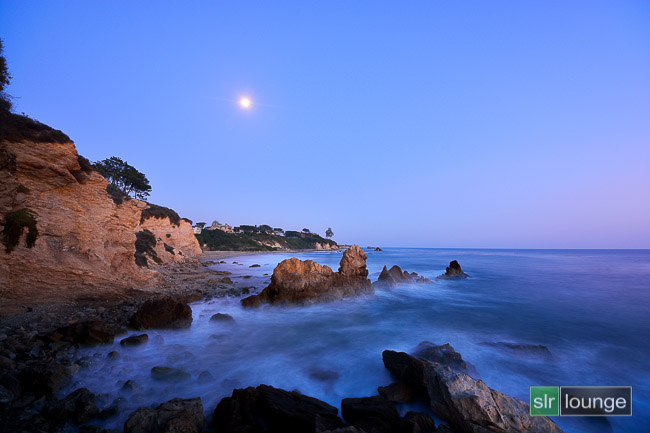 But honestly? As beautiful and serene as such an image may look, what I was feeling at the time was quite different.  The waves were crashing on the rocks with intense power, and that was what I felt was so awe-inspiring as I stood there under the bright moonlight.  So I opened up my aperture first, because having soft corners is not as bad as having grain in my opinion.  Unfortunately going from f/11 to f/4.5 only gave me about 3 stops of extra shutter speed, which still left me around the ~3 sec. mark.  The blur was still pretty prominent in the image.

So I bit the bullet and bumped my ISO up.  ISO 800 started getting me into the territory I wanted, and I hit about 1/4 sec I believe: 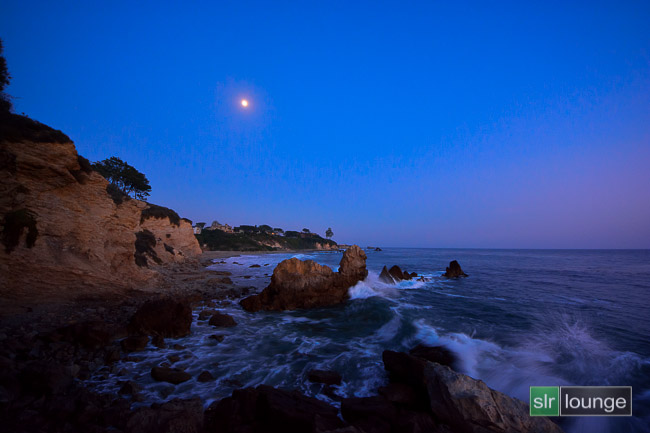 Unfortunatley the last bits of daylight were failing fast, and it was getting too dark too fast.  Instead of just boosting an ISO 800 image in post-production, I knew that I’d get better results by just going to ISO 1600 in the camera.  Even though this would of course increase my noise levels, it wouldn’t be as bad as the noise increase I would get if I tried to boost ISO 800 in post-production.   I already had my Active D-Lighting set to extra-high, which is terribly good at revealing extra shadow noise.  Anyways, ISO 1600 did the trick.  It also helped that I simply got lucky with a wave crashing in exactly the right spot I was hoping it would.  ;-)

Since Adobe doesn’t support the Nikon D7100’s RAW files just yet, I had to consider alternatives.  First, I made sure to nail my exposure and white balance in-camera, of course.  But next I also paid attention to my in-camera saturation, contrast, and Nikon’s dynamic range control option which is called “Active D-Lighting”.  Basically, I had to pretend that I was shooting JPG, even though I was shooting RAW.  Because once I got my images on my computer, the only program that could read them was Nikon View NX.  While this program does offer some editing options, they’re not the greatest and really View NX is just meant for culling.  So I picked my “keeper” shots in View NX, and then converted JPG files from the NEF files.  Then, all I did was open those JPG images in Lightroom, bump up the contrast by a few clicks, and export them at web size with a watermark.

Once Adobe updates Camera Raw to support D7100 NEF files, I’ll probably re-process the image, but I’m still quite happy with the overall color and quality of the image considering that it is “SOOC”!!!

(Read my field review of the Nikon D7100 by clicking HERE!)