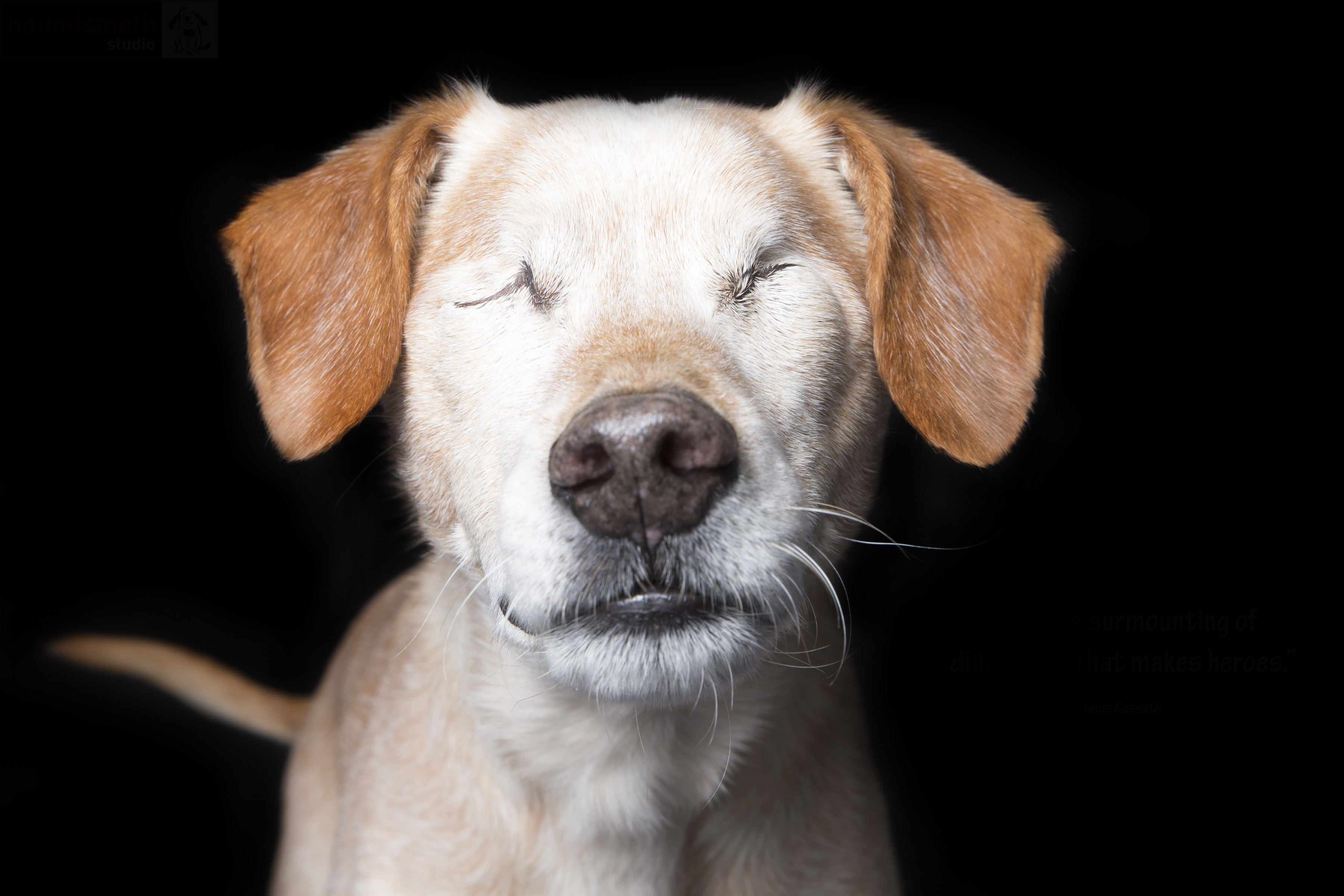 About a year ago, we talked about getting a new dog. We had a 100 lb rescue dog, and he was anxious and had dependency issues. We figured another dog would be good for him to play with, as long as it wasn’t a female dog or a puppy. So the search began of scrolling through the Petfinder App, looking for our perfect new family member. We’d stumble on a few, but none seemed quite right or were already adopted. And then I saw her. She was a scrappy little thing, with a head bigger than her body, one big blue eyeball and stitches where her other eye should’ve been. Someone had dumped this little 2-month-old baby at a high kill shelter in LA, and a rescue organization swooped her up. I wanted her, I decided. I didn’t care if I had to work overtime to pay for her medical bills, nor did I mind that she was both a puppy AND a girl. She’s been the most joyful and cutest dog I’ve ever had; even when she runs into things, it’s adorable.

Animal photographer Alex Cearns of Houndstooth Studio has a passion for animals with stories similar to my puppy. She photographs over 900 domestic animals in her studio in Perth, Australia each year. Many of these animals have been adopted from rescues and have emotional scars that the eye cannot always see; the others are physically impaired in some way or another due to illness, cancer, and other diseases or trauma. Each portrait in this series, Perfect Imperfection, showcases the animal’s beauty and tenacity in spite of their adversity.

“I love every animal I have the privilege of photographing, but those perceived as ‘different’ hold a special place in my heart. These are the creatures who have lost a leg, been born without eyes, or are still showing the scars of former abuse.

Most animals with ‘afflictions’ don’t dwell on them. They adapt to their bodies without complaint and they survive with determination. They push on, always, wanting to be included and involved in everything as much as they can, and as much as an able-bodied pet does.

The tenacity of animals to overcome adversity never ceases to amaze me. They make the most out of life and from them I have learnt so much about always seeing the positive in every situation and never giving up.”

As Australia’s leading animal photographer, Alex’s images have won numerous awards and have been published internationally. She is also the author and photographer for two books published by Penguin Books: ‘Mother Knows Best – Life Lessons from the Animal World‘ and ‘Joy, A Celebration of the Animal Kingdom’ and is extremely involved with animal rescue organizations.

This series is dedicated to Savannah and Rowdy. Both lived with dignity and joy (RIP).

If my little one-eyed pup wasn’t 65 lbs already and frightened of loud noises, I would fly her over to Australia and get her in front of Alex’s lens!

CREDITS: Photographs by Alex Cearns are copyrighted and have been used with permission for SLR Lounge. Do not copy, modify or re-post this article or images without express permission from SLR Lounge and the artist.

Commlite EF-FE AF Adapter | Is This Affordable Adapter Worth It?