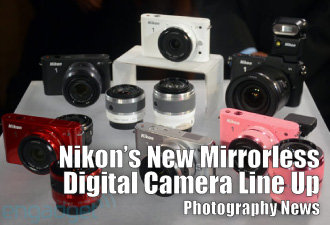 Just last night the rumors finally became true as Nikon announced their new mirrorless camera the Nikon 1 System. While standard DSLRs contain a mirror system that must flip up and down with each shot fired, the new Nikon 1 system simply records directly onto the camera’s sensor. What does this mean?

Well, the possibilities are pretty crazy. The Nikon V1 and J1 systems include a 10.1 megapixel CMOS sensor with the ability to shoot still and video. But check this out, these little bad boys not only shoot video at 1080/30p and 720/60p they also claim to be able to shoot at a 1200FPS slo-mo capture mode! In addition, you can fire of still shots while recording HD video seamlessly. Without a mirror system, these new DSLR cameras are silent as well.

While the sensor size and specs are a little disappointing to be honest, it is important to note that the Nikon 1 System is aimed at the amateur crowd. However Nikon does promise future cameras that are aimed towards more advanced crowds and even professionals.

While it is too early to know where and how mirrorless systems will affect the world of photography, the possibilites are quite exciting. Imagine in a few years being able to see a direct sensor preview of your image with a built in histogram and highlight/shadow alert. Yeah, this is going to be awesome.

To read the full post, check out the post on Engadget or the original Nikon Press Release.