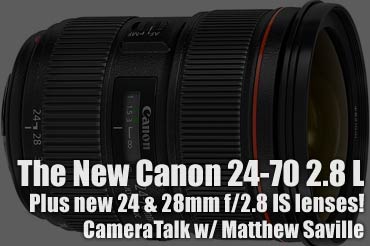 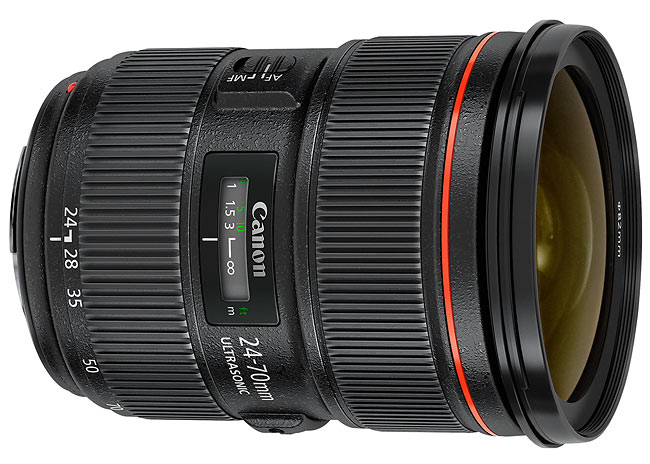 Isn’t she a beauty?Apparently this new version is even lighter than the old version, by a whole 5 oz! (YAY!!!)

It will probably set you back “only” $2300.OUCH.For a lens without stabilization, and a jump to 82mm filter threads, …this baby had better be FLAWLESSLY sharp, with super creamy bokeh!We’ll find out soon enough; it will be available as early as April of this year.

Indeed, the new short-and-stubby design has brought us to the 82mm filter thread size, instead of the previous pro standard of 77mm.This makes the THIRD 24-70 2.8 lens to hit 82mm filter threads, the two others being the latestSigma 24-70 and (also brand new) Tamron versions.Currently the only other mainstream Canon lens with 82mm filter threads is the 16-35 f/2.8 L mk2.

Also,I notice that it appears that the lens hood will mount on the moving part of the lens barrel; if the lens barrel moves at all.If this is the case, then I fear the hood will be much smaller and less effective at both stopping flare, and protecting against bumps.(The current 24-70 L has a nice beefy hood that acts as an airbag against any impact on that side of the lens.)I guess it’s a good thing they’ve apparently improved the build quality, and included a zoom lock switch plus fluorine glass coatings to discourage finger smudges etc.

You might be interested to know that the new Tamron 24-70 2.8 DOES have stabilization, though.If the price is right, (sub-$1K?) …I’m sure that MOST hobbyists will prefer this option, even many professionals too!Check out the Tamron press release HERE.

NOW, back to new Canon lenses! 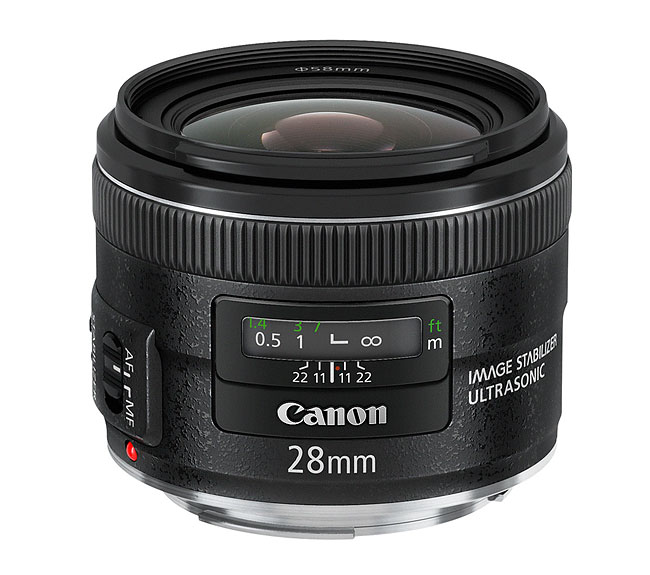 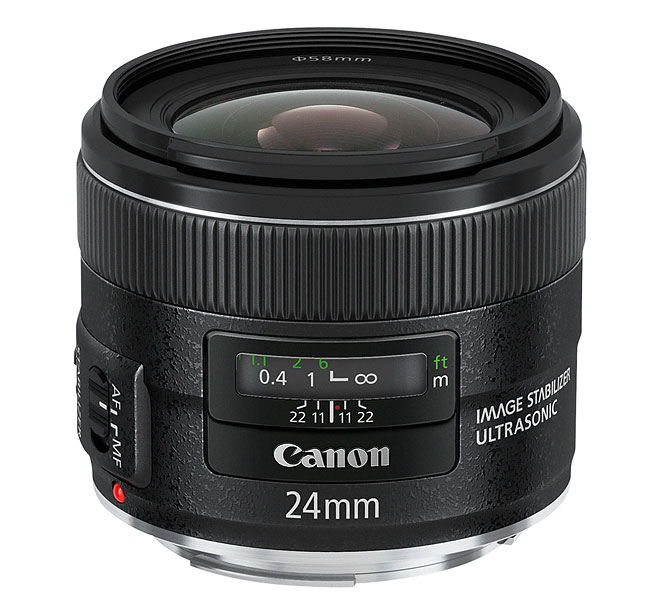 The other two new Canon lenses, which I am actually quite excited about as an outdoor photographer and low-light photojournalist, are the 28mm and 24mm f/2.8’s, both with IS! (Image Stabilization)This is a HUGE first for Canon, or ANY other company for that matter; to have full-frame primes with stabilization! (Aside from Sony of course, which has sensor-based stabilization that works when using ANY lens!)

As much as I find myself often *requiring* a 24-70 2.8 to get a job accomplished, I do love primes.They’re so small and light and sharp, …and now they’re stabilized!Honestly if I were an outdoor photographer with a 5D mk2, I’d be jumping for Joy right now..Now all Canon needs to do us update their aging 50mm f/1.4…(with or without IS, I don’t care!)

The 24mm f/2.8 IS will retail for $850, and the 28mm f/2.8 IS will retail for $800.You can Pre-order the 24mm HERE, and the 28mm HERE, from Adorama. That’s pretty pricey, but again I’m betting that these are going to be some of the ONLY lenses capable of fully utilizing the next generation of high-resolution DSLR sensors!With the megapixel race continuing, we are actually out-resolving our lenses quite often.The Canon 50mm f/1.4 is a great example of this-it just wasn’t made to resolve tons of megapixels in the extreme corners on a full-frame camera.Canon will probably update the 50mm f/1.4 some time this year, maybe in tandem with the 5D mk3 announcement which should be coming in 2-3 weeks…(Otherwise, honestly, I usually recommend the Sigma 50 f/1.4 to most Canon users.It’s so sharp, and quality-built!)