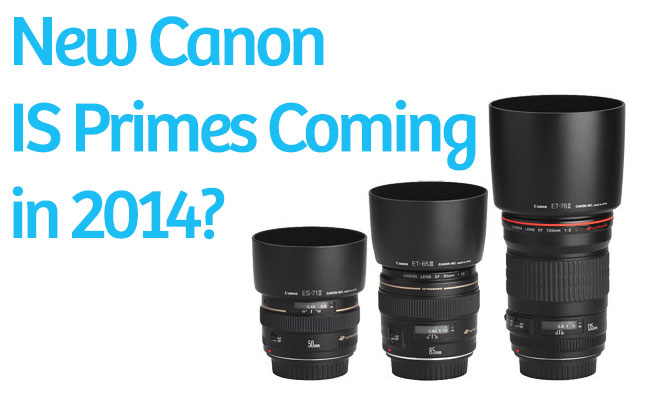 We have heard rumors of new Canon bodies that may be coming out like the Canon 7D Mark II and the Canon EOS-1 D Xs, and now we are hearing things about some of the lenses that they coming out with in 2014.

According to a report on Canon Rumors we can expect to see new IS (Image Stabilization) versions of the 50mm, 85mm, and 135mm prime lenses. This will be a boon to video shooters where IS is critical for getting smooth shots, but this could also have a negative impact for still photographers.

Again, these are just rumors and they can be (more than likely) wrong. But this is pretty big news in my mind if this is in fact what Canon has coming out. This will likely be met with joy (for the most part) from the video shooters, but I think this will irritate most stills people. Vote in the poll below and let me know what you think…

I am actually pretty torn on this myself. I love that my primes have fast apertures, but for my video work I would love to have IS over F/1.8 any day. I rarely shoot faster than F/2.8 anyway though, so maybe I am over thinking it. I guess ill have to wait and see what actually comes of these rumors…