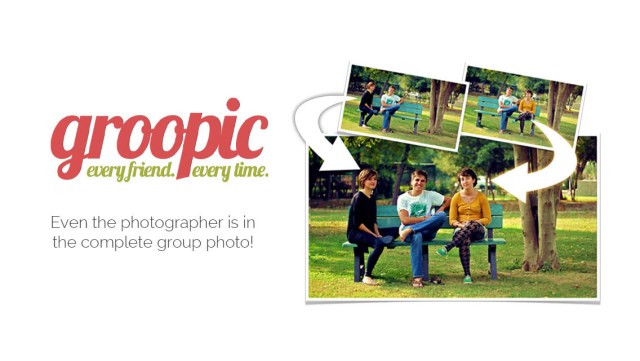 You know that age old problem, who is going to take the group picture? Usually it is answered by the person who least likes getting their picture taken, or by the best photographer in the group. Well a new iOS app called Groopic was released today which has taken aim at fixing that problem so that everyone can be in the picture, no matter who takes it.

You may have done this before with images from your professional camera, cut yourself out and place yourself in the group photo (in photoshop for example). The gist of the app is that one person takes a picture of the group and then one of the other members of the group gets up to take a picture with the previous photographer with the rest of the group, then the app merges the two images to make a seamless group photo.

You can see it in action via the demo video below.

There have been some comments regarding how easy it is to get the end image to turn out correctly. One person mentioned having to try 10 or more times to get a good final shot. As with any app it will likely take some practice.

What are your thoughts on this new app? Do you see yourself using it at your next group outing? Let us know in a comment below.

Photos of Nokia's 41-Megapixel Lumia 1020 Window Phone Are Out!