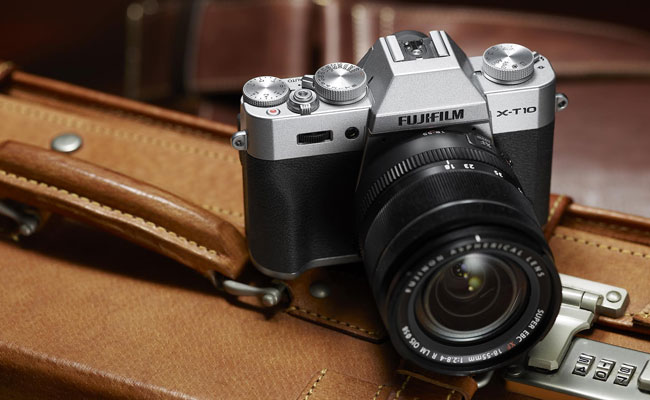 We have been talking about the rumors regarding this camera for some time now, but the time for guesses and assumptions are over. Tonight, Fujifilm officially unveiled the new X-T10, the younger sibling to the wildly popular X-T1.

On the surface, you can see the similar design language used in both the X-T1 and X-T10. But the X-T10 brings its own twist to the SLR-styled mirrorless camera market. Gone is the ISO dial on the X-T10, replaced by a new drive mode dial – pointing to the more consumer focus of this body.

The base for the X-T10 is the same as it has been for all of the recent Fujifilm releases; the tried and true 16.3MP APS-C X-Trans sensor. What the X-T10 misses in megapixels, it makes up for in other features. Namely a super fast 8fps burst mode, and newly redesigned 77point AF system that Fuji says improves greatly on the tracking abilities of the X-Series camera.

The X-T10 is clearly Fuji’s answer to the increasingly popular Sony A6000, coming in at a similar price point and offering similar features. On paper, the two cameras match up nicely, though Sony is expected to announce their next generation A6000 camera this week – so we will have to wait and see what Sony comes up with.

The new X-T10 will be available in June and will retail for just $799. Those of you looking to get one of these new cameras can now pre-order the X-T10 over on B&H.

What are your thoughts on Fuji’s new X-T10? Do you think that it competes well in the advanced amateur market? How does it stack up to the Sony A6000? Leave a comment below and let us know what you think!

Should I Get A Degree In Photography? | Ted Forbes