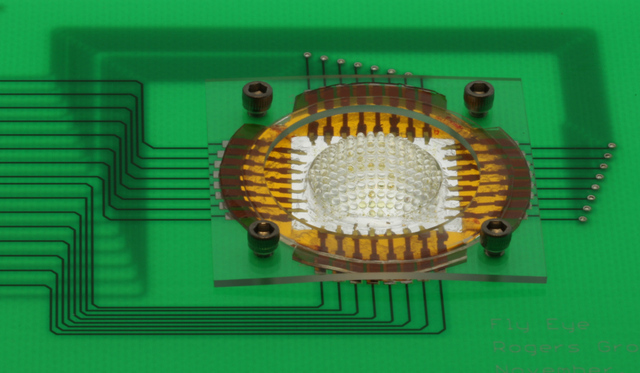 Researchers at the University of Illinois have just released information about a new camera sensor that they developed that mimics the eyes of Insects such as flies. The sensors gives us a 180 degree field of view with no distortion and almost limitless depth of field.

The new sensor features an array of hemispherically arranged lenses and detectors. The sensor has been in development for years and has just been completed. The basic idea is that all of these small sensors each capture their own image and then the individual images are combined to give the final output image. Think of it sort of like a sensor with a build in 180 degree Brenizer method, or even a panorama.

The original funding for this sensor came from DARPA (ofcourse!) so the sensor is likely going to see some sort of military use. But what I am curious about, and I am sure that you are as well, is if we are going to see any cameras hit the market with this technology. Sure it would likely be a niche product, but it could be very cool none the less.

What do you think? Will this technology make its way into mainstream cameras?

Tokina Consumer Rebates, Get ‘em While They're Hot!