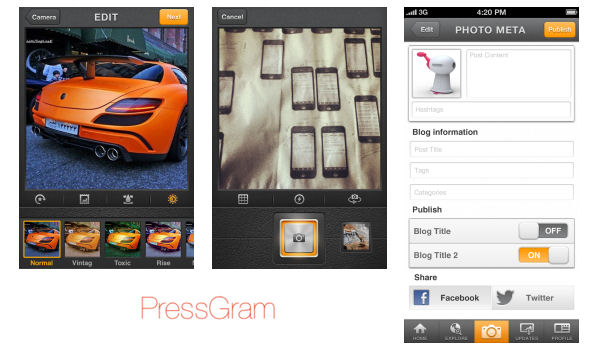 How long does it take to conceive, develop, market, and introduce a new photo-sharing app?

That’s how long it took him to bring Pressgram from the drawing board to the App Store. Whether you consider that a long or short period of time is debatable, but it’s pretty clear that Saddington has been a man on a mission, driven by the ever-changing and always confusing privacy policies, terms of service, and attempted rights grabs by the “big-name publicly traded social networks,” like Instagram.

Following Instagram’s last TOS change, a lot of users were very vocal in their criticism of what seemed to be a very over-reaching policy. They wanted alternatives that would retain the functionality without losing any control of their images.  Saddington not only had an idea in mind, but took it to popular crowd-funding site Kickstarter, where 498 backers completely funded the project in 30 days.

According to Saddington, “Pressgram started as a deeply personal project – I just wanted to take filtered photos and own them completely without worry or anxiety about commercialization. Originally I had planned on just building it myself for myself- and that being that. But when my wife suggested I put it on Kickstarter, well, the rest–as they say– is history. It became a very public and community-oriented app overnight.”

The App Store is full of iPhone camera apps that will filter your images, so what’s the big deal?

Remember that Saddington’s goal was to be able to not only filter photos and retain full ownership, but still have a platform for sharing them. So, he created his app with WordPress integration, allowing and encouraging users to publish their images directly to their WordPress blogs.

An avid WordPress blogger himself, Saddington saw that creating an app that allowed people to bring their words and pictures together in a way that took nothing away from the user in terms of privacy or copyright would give iPhone photographers unprecedented creative control over their shared images.

There is no doubt this has been a very personal journey for Saddington. “I know that a lot of people will care more about the function and value of publishing directly to WordPress, which is fantastic because it does create a lot of direct and obvious value, but I hope they see it bigger than just-another-app; that they see there’s a heart and soul behind what we’re doing, and a movement of people who deeply care about their content, their privacy, ownership, and rights.”

In addition to the WordPress integration, the app also boasts the ability to post to multiple blogs at once, editing effects beyond the filters (e.g., tilt shift, blur, and lighting), and the option to watermark your photos.

Pressgram definitely seems to be attracting interest, having been downloaded over 1,000 times in its first day.  With plans for an Android version, as well as additional blog platforms, Saddington tells me that this is only the beginning. “Even when I take a look at it now I’m stunned at what we’ve accomplished over the past year. We’ve come so far and yet we’ve only just begun! I think the future is very bright for this small app and community – and we’re going to be doing some neat things this year to make sure it stays on the forefront of people’s mind!”

How to Control Light By Using Flags Jeff Guyer is a photographer based in Atlanta, GA., currently specializing in commercial and portrait photography, as well as weddings and sports. In addition to his time behind the camera, Jeff also spends a few days a week at the front of a classroom, teaching his "Digital Photo Challenges" class for kids. When not photographing for his clients or teaching a new generation of photographers, Jeff-- still an avid film shooter-- can usually be found somewhere on the streets of Atlanta, chasing light and telling a story. You can see more of his work on his website, or you can follow him on Facebook at Guyer Photography, or on Twitter @guyerphoto.