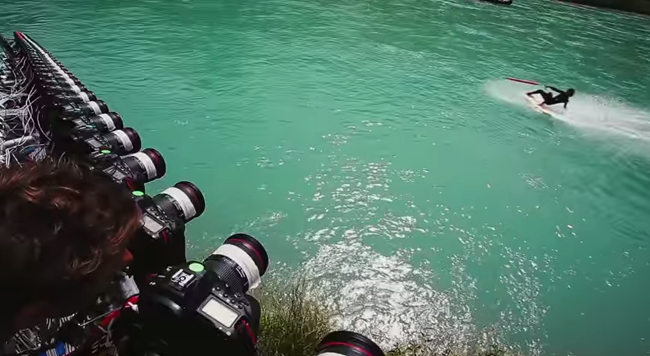 How Many Canon EOS-1D X DSLRs Does It Take to Freeze Time? Apparently 50…

The bullet time effect was made famous in the late 1990’s with the movie The Matrix. It takes multiple cameras working in unison to create the slow motion effect where time seems to freeze, yet the camera is still moving around them. To recreate the effect and do it well, it usually takes a production crew and a large Hollywood budget. Something a public broadcast documentary doesn’t have, but one Swiss production company, DokLab made it happen.

They needed 50 cameras and 50 lenses for a shot that they envisioned to conclude a segment for a Swiss TV show that showcased extreme sports for a public broadcaster. The particular segment was about bungee surfing, a sport where surfers use bungee cords to catapult them up river. So DokLab asked Canon, who happened to have 50 Canon EOS-1D-X‘s and Canon 24-70mm f/2.8 II USM’s on hand (in preparation for the World Athletics Championships in Moscow).

With half a million dollars in equipment, the team at DokLab, who incidentally had never used the 1D-X before, set out to unbox 50 cameras and lenses, set them up to all the same settings (1/1000sec at f/2.8, ISO 800) and place them on the rig. “We set-up one camera and used a CF card to copy and paste the profile and chosen custom settings to the rest of the cameras, so they were all the same. That was important.” said one of the cameramen, Pierre Reischer. They also had to devise a way to trigger all 50 cameras at the exact same time.

After the shoot was completed, it took 2 weeks to edit the 10 second clip, but in the end, the team says it was well worth the effort and the client was ecstatic. Watch the “making of” video below (it’s in German, but it’s still pretty spectacular to see the set up).

Read more about the shoot and see some great behind the scenes images over on the Canon Professional Network. I’m going to go ask Canon if they’d let me borrow a few 1D-X cameras.

[Via CPN/Digital Trends/ Images via Screengrabs]