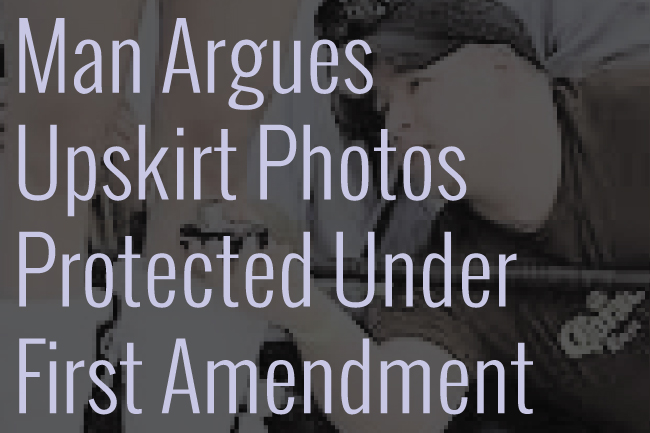 Man Argues That ‘Up-Skirt’ Photos are Protected Under First Amendment

In 2010, Michael Robertson, an Andover man was arrested for allegedly using his cell phone and taking photos up women’s skirts (or “up-skirting”) without their consent or knowledge. He is being charged with two counts of photographing an unsuspecting nude or partially nude person on Boston’s Green Line subway.

Earlier this week, in an appeal before the Massachusetts’ Supreme Judicial Court, Robertson’s lawyer Michelle Menken, argued that, “if a clothed person reveals a body part whether it was intentional or unintentional, he or she can not expect privacy.”  She states that the law is outdated and has no protection for clothed people in public places. She maintains that if her client is convicted, his first amendment right for free speech would be violated.

Wait, so when does sneakily taking a picture up someone’s skirt protected under the first amendment? I’m pretty sure Thomas Jefferson and Co. wasn’t thinking about alleged creepers with cell phones when they drafted up the Constitution. According to Robertson’s female lawyer, the peeping Tom law only protects people from being photographed in bathrooms or dressing rooms where they are nude or partially nude. Besides, since the women he photographed all had underwear on and no private parts could be seen, they could not be considered ‘partially nude.’

They have to be in an exposed state to violate the current law and these women were not.

Menken’s concern is for protecting artists and photographer’s rights and it seems that some of the justices were also concerned. Chief Justice Gant asked,

What if a photographer is doing a project of people on the subway or out in public and he wants to get candids. Can he now not do that?

Um, first of all, since when did a pervert surreptitiously trying to snap photographs under my skirt be considered a “photographer?” By wearing a skirt, am I inadvertently granting permission to have someone try to photograph my underwear? And if I happen to not be wearing any underwear, would Robertson actually admit to his perviness and serve his 2+ years in prison?

But as his lawyer contends,

What he saw was in plain sight. He did not place his camera directly up a women’s skirt. He saw what was in front of him.

Robertson allegedly held the camera to his waist and covertly took photos of a woman without her consent of an area she intentionally tried to cover. Where is the line drawn for a person’s reasonable expectation of privacy? For me, it’s when I put on my clothes, and cover the parts I don’t want to be seen or photographed.

What do you think? Are your first amendment rights as a photographer endangered if Michael Robertson is convicted?

Introducing the Profoto B1 - The First Ever Studio Strobe with TTL