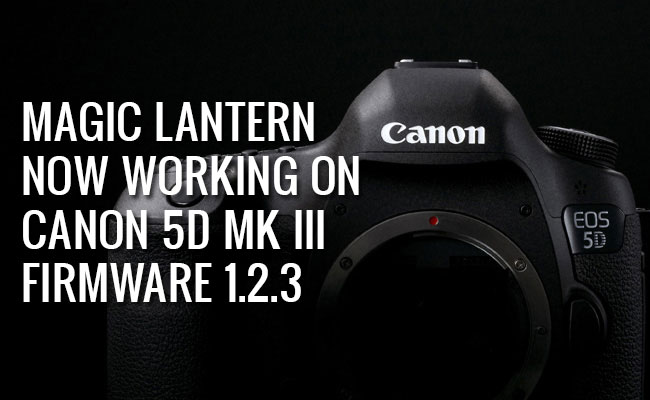 If you are into using Magic Lantern on your Canon 5D Mark III, you have probably stayed away from the 1.2.3 firmware update due to its incompatibility. Well, it was announced today that Magic Lantern is now working on the 5D III with the firmware 1.2.3, but if you are the cautious type, you may still want to wait before trying it out.

According to Alex over at Magic Lantern, the working version with the new(er) Canon 5D Mark III 1.2.3 firmware is not even an alpha, he calls it a “bleeding edge” version. Though he admits his standards to be pretty high, so most of us may consider it to be a semi-stable release.

But alas, now that they have gotten over the hump, it shouldn’t be too long  before they have firmware 1.2.3 figured out and the 5D III can be used with the latest firmware without problems. Still, if you want to use the 1.2.3 firmware, as well as Magic Lantern, this is great news because now you can (assuming you are OK with messing around with a semi-stable version).

Now, if only they could get a beta or fully supported version up for my Canon 6D, I would love that! If you want more details about this new version for the Canon 5D Mark III 1.2.3 firmware you can get the details here on the ML forums.

Surrounded by Millions of Jellyfish | Photographs by Nadia Aly