The Canon 7D has always been sort of an outcast when it comes to Magic Lantern, most recently being pretty much the only recent camera model without a RAW video mode via ML (I mean heck, even the 50D has one).  Today 7D owners have something to be happy about, it appears that Magic Lantern has found what they need to develop a RAW video mode for the 7D!

It is important to note that this is not a done deal, development still needs to happen but Magic Lantern developers are confident that they can get it done. This is huge news for 7D owners, as it opens up (in theory) the popular camera to the world of RAW video just like that which is available on the 50D, 60D, and 5D Mark II/III. 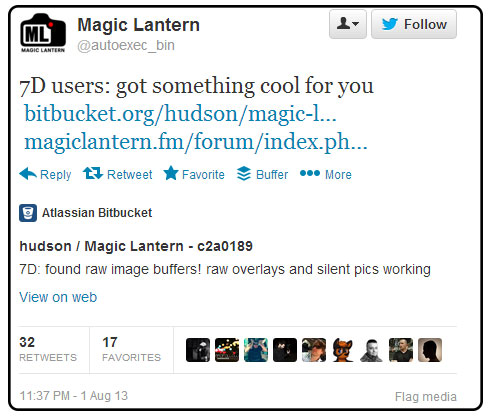 Knowing Magic Lantern it is only a matter of time before his gets figured out, though it may take longer than we would like. The 7D has always been sort of an enigma to the ML team, who still 4 years after the camera’s launch have not released a full ML version for the 7D.

They have made huge advances recently and I am confident that we will see Raw video on the 7D sooner than later.

What are your thoughts on the matter? Are you excited about the prospects of RAW video on the Canon 7D? Let us know in a comment below.

Shooting a Documentary Promo Behind the Scenes